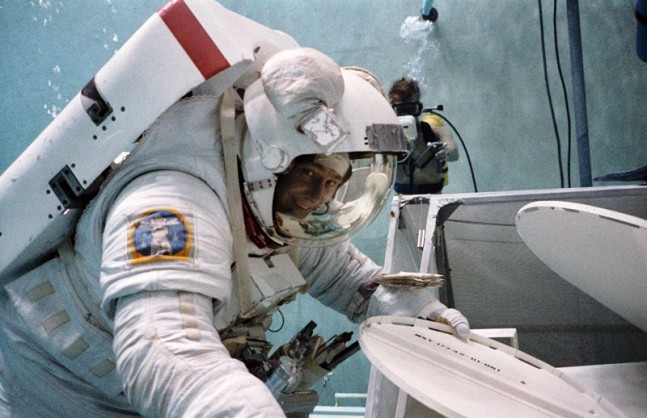 Former NASA astronaut Jerry Ross spoke with SpaceFlight Insider about being an astronaut, an author and being inducted into the U.S. Astronaut Hall of Fame. Photo Credit: NASA

KENNEDY SPACE CENTER< Fla — Jerry Ross knows a thing-or-two about space flight – he ought to – he has taken the journey into the black of space seven times onboard the space shuttle – a record met only by one other astronaut in history. Ross’ accomplishments prompted him to write a book about his experiences – with a children’s book on the subject poised for release. His achievements have prompted his colleagues to act as well – by including him in the U.S. Astronaut Hall of Fame – he will be inducted along with fellow classmate Shannon Lucid on Saturday, May 3.

Ross sat down with SpaceFlight Insider prior to the induction ceremony to talk a bit about what the honor meant to him, why he has taken up writing and what his hopes for the U.S. Space Program are.

SpaceFlight Insider: First off, you’re about to be inducted into the Astronaut Hall of Fame!

Ross: “Thanks! It’s an incredible privilege and honor!”

SpaceFlight Insider: First things first – we understand you are working on a new literary effort – care to tell us a bit more about that? Ross: “Sure thing, in conjunction with the Purdue College of Education, I’m working on a  child’s version of my book called SpaceWalker – this one will be called Becoming a SpaceWalker: My Journey to the Stars. My co-author is Susan Gunderson – it should be coming out in September of this year – in fact we submitted the first draft of this book at the end of March. It’s in pretty good shape right now. We’re looking forward to proceeding with the editing cycle – it ought to go by pretty smoothly because we already have a pretty good draft put together.

The book is targeted for third and fourth grade reading levels and the College of Education is putting together lesson plans that are in full compliance with the Indiana educational standards and I think that they already have schools around the State to test it in – including the elementary school that was named on my behalf back in my hometown of Crown Point, Indiana. We’re excited about it – we’re trying to encourage young people to discover what their God-given talents are and how they might use those in their adult lives, to set goals for themselves, to study hard, to work hard and to not give up too easily.”

SpaceFlight Insider: Is the children’s book an adaption of your original book SpaceWalker?

Ross: “No, we made this one separate. It touches on some of the core elements of SpaceWalker, but it’s not really based off of that book.”

SpaceFlight Insider: You’ve talked today about not giving up too easily likely has a lot to do with a special honor that you will be awarded soon – would you care to talk about that some?

Ross: “It’s quite an honor for me to be inducted into the Astronaut Hall of Fame – I received a phone call a couple of months back from Dan Brandenstein – who is the current president of the Astronaut Scholarship Foundation and he informed me of that fact. I’m really delighted that I’m going in with Shannon Lucid. Shannon is a good friend who I respect greatly during our time working together over the years. In fact, in some ways, she’s my sister!” Ross was pleased when he found out that he would be inducted into the Astronaut Hall of Fame alongside his close friend and fellow astronaut Shannon Lucid. Photo Credit: NASA

SpaceFlight Insider: How so?

Ross: “Shannon and I went to China, several years ago. I took my mother with me, which turn out to be an excellent move. The Chinese have a lot of respect and reverence for their seniors and me bringing my mother along was a good sign of my judgment (laughs).

Anyhow, my mother and Shannon began ganging up and picking on me and I realized that I had gained another sister in the family. So, after a while we started kidding; ‘sister-Shannon – quit it!’ (laughs) My mother, until her death enjoyed sending and receiving letters from Shannon. It was a very side note coming from Shannon considering we were in the same class.”

SpaceFlight Insider: That must make this an extra-special occasion. You’re not just being inducted to the Astronaut Hall of Fame – you’re doing so beside one of your close colleagues and friends!

Ross: “Absolutely, to be able to inducted into the Hall of Fame with the original seven (the Mercury Seven astronauts) who were not only my heroes, but the heroes of not only most Americans – but people around the world – is not only a dream-come-true but this is kind of like having my cake and eating it too.

I’m joining many of my friends as well as crew members from past shuttle missions that I’ve flown and it’s going to be a great weekend to see friends that I haven’t seen in a long time. “I’m sure we’ll ‘enlarge’ the stories a bit better than what they were originally and to have fun. To just enjoy the whole weekend with family and friends – it will be great!” Ross is tied for having traveled to space the most times with Franklin Chang-Diaz Ph.D. Photo Credit: James N. Brown

SpaceFlight Insider: Were you given any forewarning that you were going to be inducted, was it a complete surprise? How does that work?

Ross: “For me – it was almost a total surprise. I don’t understand the entire process, I only got to see the end result of it. I was on a trip when I received a package on the mail from the Astronaut Hall of Fame asking me to provide some information to the selection committee. That package arrived about a day or so after I had left on a three-week vacation. By the time I had gotten back – it was too late for me to submit the information. So, I called them and said; ‘Hey, I was out of town.’ They were like; ‘Okay, don’t worry about it.’

About two months after that I got this call early in the morning from Dan Brandenstein and I go; ‘Good to hear from you Dan – what are you calling for? (laughs) – and that’s when he informed me. He told me that I couldn’t say anything yet because they had to wait for the formal announcements and things. But, it was a real surprise and certainly something out of the blue as far as I was concerned and again, to here that Shannon was going to be my classmate in the induction ceremony? It was a real treat.”

SpaceFlight Insider:  When did you find out that Shannon would be inducted with you at that time or did you find that out later?

Ross: “Dan told me that Shannon would be the other member in the class when he told me I would be inducted.”

SpaceFlight Insider: We’re sure that you have a busy schedule ahead of you, is there anything that you would like to share with our readers in closing?

Ross: “I was fortunate enough as a young person to have a very exciting space program being pursued by the United States. That involved an entire generation of people, my generation, getting excited about what  our country was going to do and finding out how we can get involved in it. It instilled in us an urgency to get a great education and to get into our country’s space program be it as an engineer, as a scientist or whatever. That greatly increased the number of students going into engineering and science fields in our country. While not all of them went into work in our space program – those highly-educated individuals entered into a wide-range of endeavors which gave a shot adrenalin, a boost to our economy.

SpaceFlight Insider: Thanks for sitting down with us and sharing your perspective!

Ross and Lucid’s induction ceremony will begin at 1:45 p.m. EDT at the Kennedy Space Center Visitor Complex in Florida. As mentioned, Ross flew to orbit on space shuttles Atlantis, Columbia and Endeavour on missions STS-61-B, 27, 37, 55, 74, 88 and 110. He shares the record of the most trips to space with fellow NASA astronaut Franklin Chang-Diaz Ph.D. Canadian astronaut Chris Hadfield described Ross as the “astronaut archetype” in his autobiography An Astronaut’s Guide to Life on Earth.