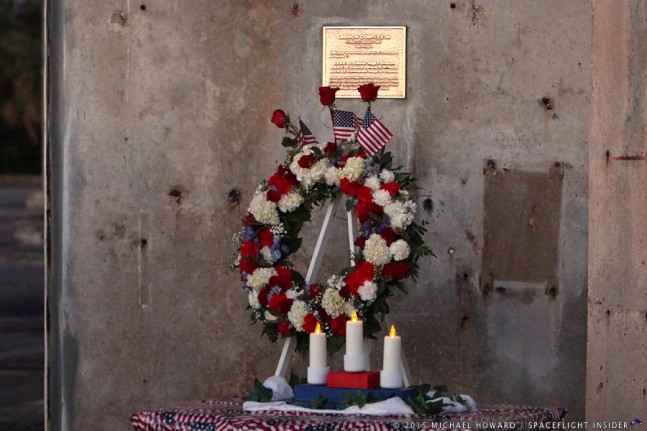 Three candles were lit -- one for each of the crew -- in honor of the anniversary of the Apollo 1 fire. Photo Credit: Mike Howard/Spaceflight Insider

CAPE CANAVERAL, Fla – A somber crowd of approximately eight dozen met at Cape Canaveral Air Force Station’s Launch Complex 34 (LC-34) for the 48th annual celebration of life of the Apollo 1 crew who died at 6:31 p.m. EST (1131 GMT) on Jan. 27, 1967. Betty Grissom, wife of Gus Grissom was joined by her sons Mark and Scott in remembering the trio. Gus Grissom’s brothers Mark and Scott and their families were also in attendance.

On Jan. 27, 1967, the crew of Apollo 1, Gus Grissom, Ed White, and Roger Chaffee were strapped into the Command Module for what was known as a “plugs out” rehearsal test. As the crew flipped various switches, an electrical short sparked, igniting the 100 percent pure oxygen in the cabin, which killed all three crew members. Today, a bronze marker on the concrete rocket stand marks the death of the three crew members.

During the benediction, Air Force Chaplain Captain Scott Sevelle noted that, “it was here that time and eternity intersected some 48 years ago. Our grief walks along the deep sense of accomplishment of lives well lived. ” A mix of family, friends, and those wanting to pay tribute to the Apollo 1 crew, gathered to mark the 48th anniversary of the tragic fire. Photo Credit: Sean Costello/Spaceflight Insider

Mark Thomas remarked, “The preceding Mercury and Gemini Programs had their problems, as every developmental flight test program does. But Apollo would be bigger and more complex than anything previously flown. As a result, her problems were bigger, too. Some have asked why the crew did not walk away from a trouble-plagued program. What happens when you walk away from the project? Another crew is given the assignment. To answer this, one must know the meaning of being a test pilot. The test pilot is responsible for reporting the nature of the problem, assisting in pinpointing its cause, and providing recommendations. It is the job of the test pilot to help solve problems, not to pass them on to someone else. That’s what you sign up for. After the maiden flight of Orion, as we prepare to send humans beyond low Earth orbit, it is time to remember the legacy of Apollo 1. The importance of diligence, and an uncompromising commitment to safety and excellence.” The Moon, a place the Apollo 1 crew hoped to fly before their lives ended in a tragic fire, shown brightly over head at the Apollo 1 memorial. Photo Credit: Spaceflight Insider

During the memorial a musician played “America” on bagpipes and representatives from the Air Force, Navy, and NASA’s Kennedy Space Center also made remarks. They noted the nearly 3,500 rocket launches from this small piece of Florida. They also remembered the 14 other astronauts who have been killed in space flight, 5 in training flights, as well as 21 ground support crew.

At 6:31 p.m. EST, the three candles were extinguished and the members of the audience lit hand-held red, white, and blue torches. There was a moment of silence. The bagpiper played Amazing Grace. A bugler played taps as those in attendance rose. The period of time between Jan. 27 and Feb. 1 marks a “black week” on the calendar for NASA as all major space-related tragedies took place within this timeframe.

Brave men for when there was a Nation that dared to dream, and accomplish the impossible. And we did. Sadly, a time we most likely will never see again.

January 27th marks the 50th anniversary of the tragedy. Honor the sacrifice of these true American heroes. Recognize how their accomplishments paved the way for future generations of space explorers. Thank you for your service Gus, Ed, and Roger.