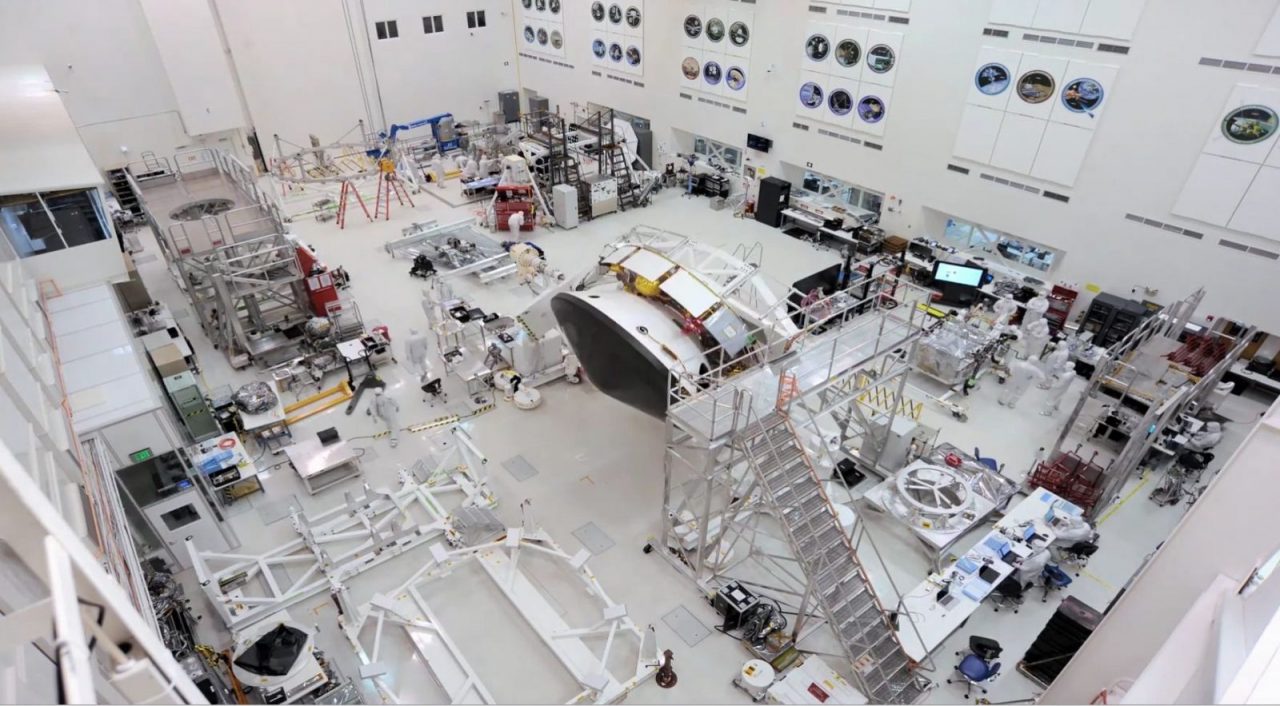 The Mars 2020 rover can be seen at the center of this photo attached to the SCARF (Spacecraft Assembly Rotation Fixture). At present, the spacecraft is located in the High Bay 1 clean room in JPL’s Spacecraft Assembly Facility. Photo Credit: NASA / JPL-Caltech

NASA’s Mars 2020 mission has reached a crucial milestone in preparation for its launch, currently scheduled for July of 2020. In recent weeks, major spacecraft components and test equipment have been tucked inside the entry capsule in a process known as ‘vehicle stacking.’

“One of our main jobs is to make sure the rover and all the hardware that is required to get the rover from here on Earth to the surface of Mars fits inside the payload fairing of an Atlas V rocket, which gives us about 15 feet [5 meters] of width to work with,” said David Gruel, assembly, test and launch operations (ATLO) manager for the Mars 2020 mission at NASA’s Jet Propulsion Laboratory (JPL).

The first step of the vehicle stacking process was placing the rocket-powered descent stage on top a surrogate rover. The actual rover is being integrated and tested in parallel with the spacecraft stack. After all the holes were lined up and all of the parts were attached, check and double-checked, the spacecraft’s back shell was gently lowered onto them using a gantry crane.

“That crane has lifted almost every spacecraft that’s come through JPL since Mariner,” said Gruel. “To safely lift the large pieces of the Mars 2020 spacecraft, we utilize a dozen technicians and engineers.”

After the back shell was put in place and everything was checked to insure a proper fit, the team installed the parachute nosecone, which protects the parachute as the spacecraft enters the Martian atmosphere. Next came the donut-shaped cruise stage, which will power the spacecraft during its seven-month long journey to Mars. The stack was turned on its side so that engineers had access to the mating points between the cruise and descent stages in order to make connections. Finally, the stack was returned to its original position, so that the heat shield could be raised and attached.

“Stacking is an important milestone in mission development, because as good as our computer models are, we still need to put it together to show that the bolt holes line up and everything fits together,” said Gruel. “It is a great feeling for the entire project when we see the stack sitting there waiting to go for the next part of its journey, which will eventually lead to a launch pad at the Cape Canaveral in July of next year.”

Following vehicle stacking, the spacecraft was moved to JPL’s Environmental Test Facility to undergo acoustic testing. The stack will be blasted with sound, replicating the sound waves created during a rocket launch. After making sure that nothing has shaken loose during the acoustic test, the stack will be taken to the thermal vacuum chamber for a week-long test that simulates the harsh environment of space.

“Nothing is static with this mission,” said Gruel. “After the acoustic and thermal vac tests, the stacked spacecraft is returned to the assembly building for de-stack, then more testing and more work. Until the hold-down bolts on the Atlas rocket blow and our rover is headed to Mars in July of 2020, there is almost always something being assembled, tested or modified.