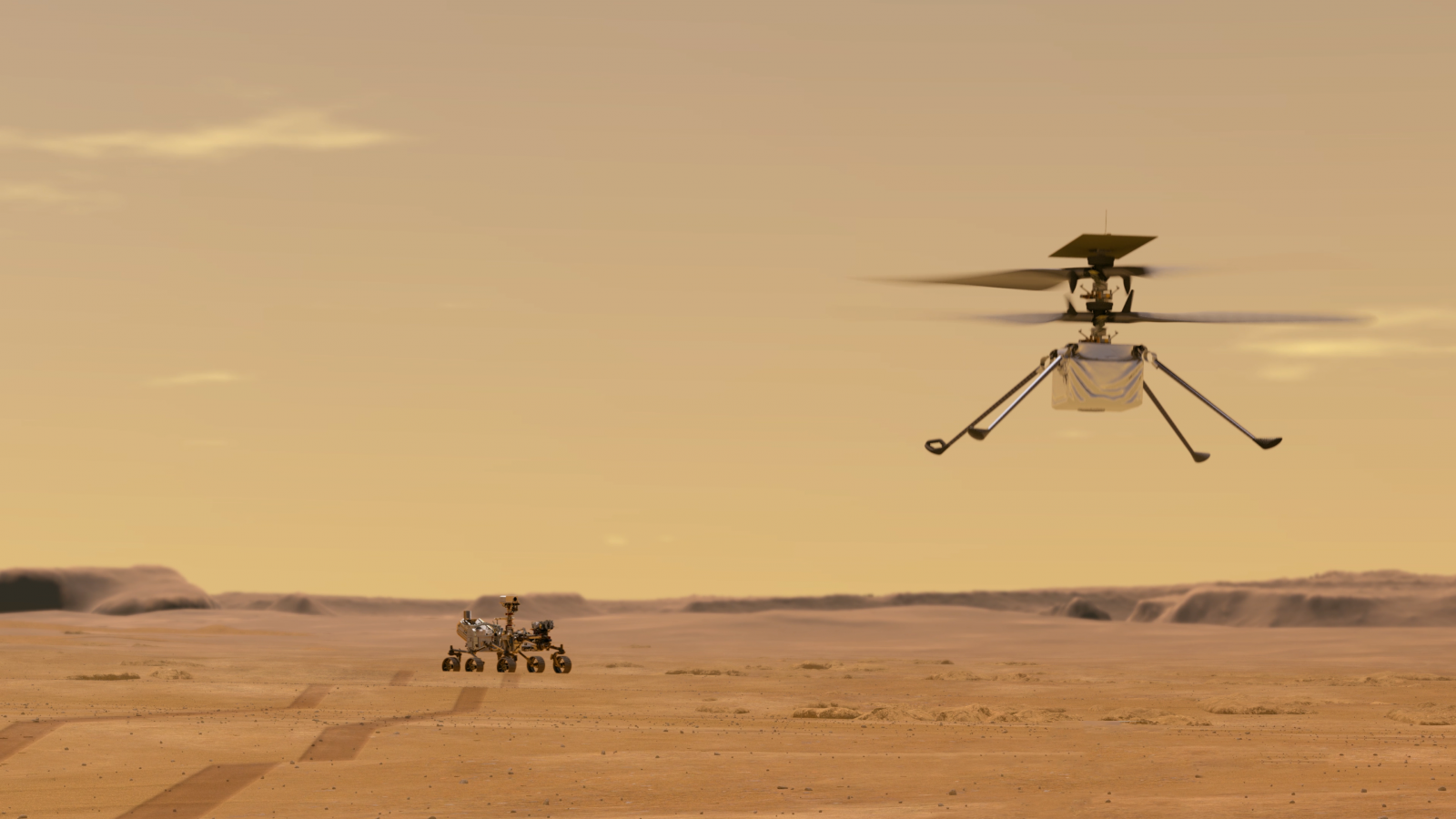 An illustration of the Ingenuity helicopter flying on Mars. Credit: NASA

Now that NASA’s Perseverance rover is safely on Mars, all eyes are shifting toward the deployment of a small technology demonstration, a drone-like helicopter called Ingenuity.

Ingenuity is tucked away under the chassis of Perseverance and was only recently revealed to the open Martian atmosphere when its debris shield was jettisoned. However, a lot still needs to happen before the helicopter is deployed to the surface of Mars to operate on its own.

“As with everything with the helicopter, this type of deployment has never been done before,” Farah Alibay, Mars Helicopter integration lead for the Perseverance rover, said in a NASA press release. “Once we start the deployment there is no turning back. All activities are closely coordinated, irreversible, and dependent on each other. If there is even a hint that something isn’t going as expected, we may decide to hold off for a sol [a Martian day] or more until we have a better idea what is going on.” 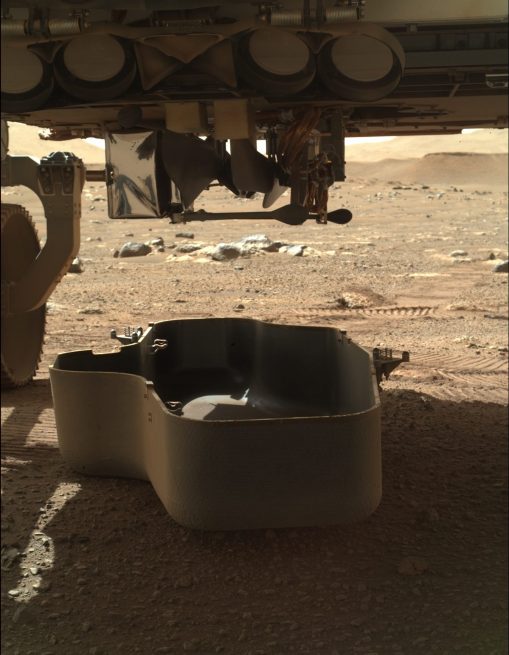 The debris shield protecting the Ingenuity helicopter underneath the Perseverance rover was jettisoned in advance of its deployment sequence. Credit: NASA

The Ingenuity Mars Helicopter is a technology demonstrator created by NASA’s Jet Propulsion Laboratory or JPL.

These tests are expected to be the first example of rotor-powered flight on another planet. The demonstration is even more of an undertaking since Mars’ atmosphere is only about 1% the density of Earth’s atmosphere.

Overall, Ingenuity weighs a paltry 4 pounds (1.8 kilograms), which is less than a newborn human baby.

The helicopter is designed with a maximum flight speed of about 22 miles per hour (35 kilometers per hour), a flight ceiling of about 15 feet (about 5 meters) and a range of about 980 feet (about 300 meters).

Ingenuity is small, light and agile but built tough, which should help it survive the harsh Martian surface environment. Ingenuity’s test flight duration is limited to about 30 Martian sols (about 31 Earth days).

Its primary mission is to demonstrate this particular form of technology is feasible and viable for future exploratory missions on other bodies with atmospheres in our solar system. Its mission milestones are as follows:

To get the helicopter off Perseverance and onto the ground will require a series of events. Now that the debris shield is off, the rover is currently driving toward the designated deployment area, which happens to be near where the rover landed on Feb. 18, 2021.

NASA said the deployment is expected to take six sols. One sol is about 40 minutes longer than an Earth day.

According to NASA, the first sol will involve the activation of a bolt-breaking device to release a locking mechanism that is holding the helicopter on the belly of Perseverance.

The next sol should see pyrotechnic device fire to cut a cable that should enable a mechanized arm to begin rotating Ingenuity from its stowed horizontal position to near its upright position. Two of the helicopter’s four legs should also deploy during this period. 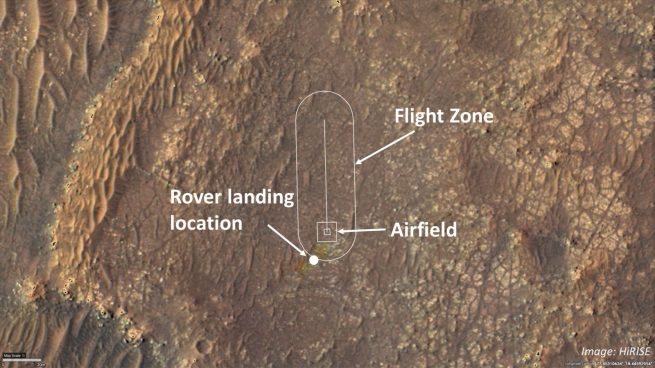 On the third sol, NASA said a small electric motor will finish the rotation of Ingenuity to an upright position and lock it in place. Sol four is expected to see the final two landing legs deploy and lock into place and suspend the helicopter just 5 inches (about 13 centimeters) above the ground.

A camera on Perseverance robotic arm (called “Wide Angle Topographic Sensor for Operations and eNgineering” or WATSON) is expected to image these milestones.

NASA said sol five is expected to be used to ensure Ingenuity’s batteries are charged fully via Perseverance’s power source before dropping the drone-like device on sol six.

By this point, only a single bolt and tiny electrical contacts will be connecting Ingenuity to Perseverance, NASA said. Once separated, the team has about 25 hours to move the rover away from the helicopter so that its small solar panels on the top of its rotor blades can begin using the sun to power its batteries.

When Ingenuity is safely deployed on the Martian surface, Perseverance is expected to be commanded to drive to a safe distance to observe the helicopter’s test program. The overlook where the rover will be stationed has been named “Van Zyl Overlook,” in honor of Jakob van Zyl, who was the team’s longtime colleague, mentor and leader at NASA’s Jet Propulsion Laboratory, according to NASA. The space agency said he died unexpectedly in August 2020, about a month after the launch of Perseverance.

Once the rover is out of the way, the Ingenuity team is expected to have 30 sols to check out the helicopter and begin its technology demonstration mission.

If all goes according to plan, Ingenuity is expected to make the first propelled flight on another planet as early as April 8, plus or minus a few days, according to engineers. 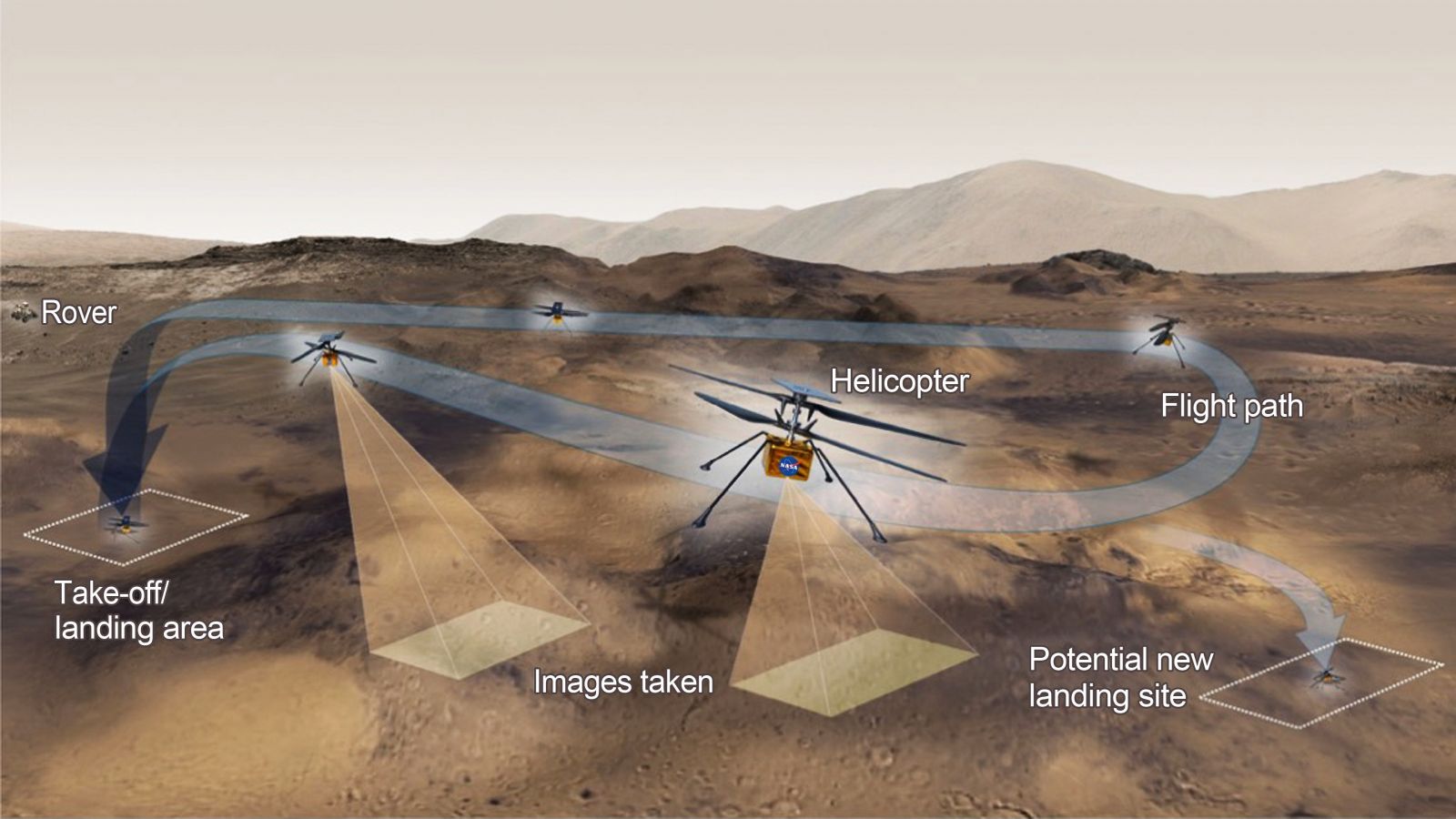 Ingenuity is carrying with it a small piece of the original Wright Flyer, which made the first powered, controlled flight on Earth on Dec. 17, 1903, at Kill Devil Hill, near Kitty Hawk, North Carolina.

“We are very proud to honor that experimental aircraft from long ago by carrying a small piece of fabric on Ingenuity,” said Bob Balaram, Ingenuity’s chief engineer, during a press conference on March 24, 2021. 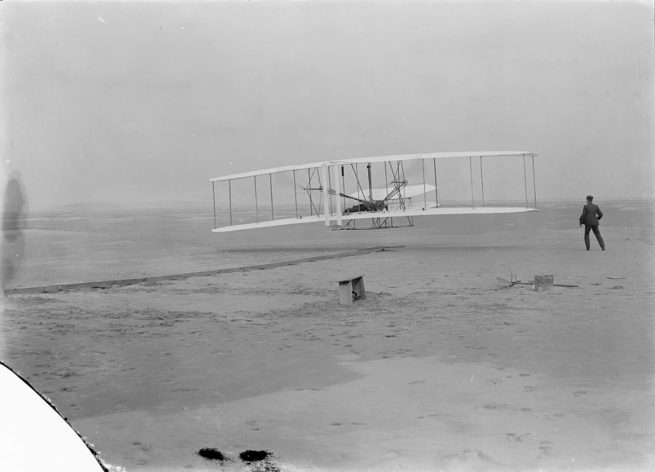 The first powered, controlled flight on Earth was conducted by the Wright Brothers. Orville Wright was at the controls of the Wright Flyer, which made the first, brief flight on Dec. 17, 1903. Credit: Library of Congress

Balaram described the fabric as about the size of a postage stamp.

“It’s really a small little element being sealed and wrapped appropriately and it’s been attached to a small cable on the underside of the solar panel and it’s called the ‘Pride of the West.’ That’s the kind of fabric that was used on the original [Wright] Flyer,” Balaram said.

The Mars 2020 Perseverance rover with the Ingenuity helicopter endured a harrowing journey from terra firma to Mars atop a United Launch Alliance Atlas 5.

Perseverance and Ingenuity made it through what engineers on Earth have dubbed the “seven minutes of terror,” screaming into the atmosphere of the Red Planet at some 12,000 miles per hour (19,000 kilometers per hour).

Perseverance is the fifth rover sent to Mars. Its heritage dates back to the first rover, Sojourner, which itself was a technology demonstrator on the Mars Pathfinder mission in 1997.

“When NASA’s Sojourner rover landed on Mars in 1997, it proved that roving the red planet was possible and completely redefined our approach to how we explore Mars. Similarly, we want to learn about the potential Ingenuity has for the future of science research,” Lori Glaze, director of the Planetary Science Division at NASA Headquarters, said in a press release. “Aptly named, Ingenuity is a technology demonstration that aims to be the first powered flight on another world and, if successful, could further expand our horizons and broaden the scope of what is possible with Mars exploration.”