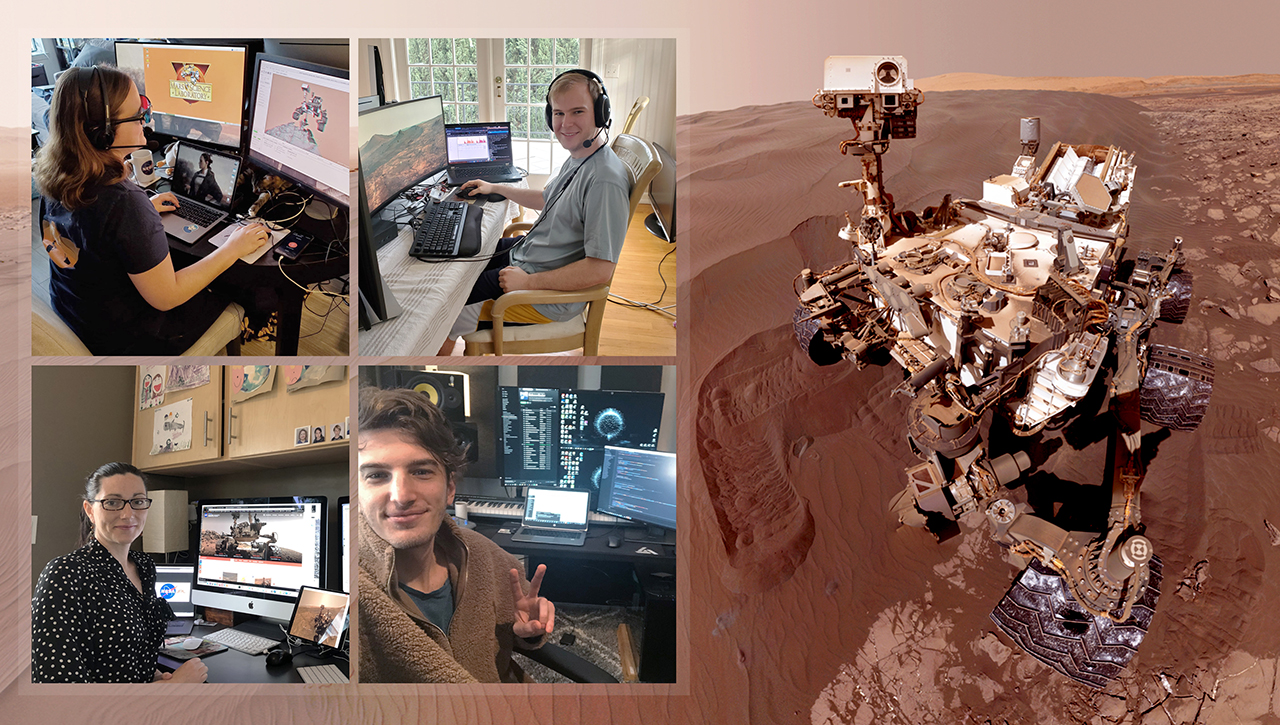 While the majority of scientists and engineers who work at NASA’s Jet Propulsion Laboratory (JPL) in Pasadena, California are currently off-site, that doesn’t mean that their work supporting interplanetary missions has ground to a halt. NASA’s Curiosity Mars rover continues to explore the Red Planet, guided by a mission team that is working remotely from home.

No one from the mission team was present at JPL on March 20,  2020 when the first completely remote planning of the rover’s operations took place. Two days later, the rover executed the commands they had sent to Mars, successfully drilling a rock sample at a location named “Edinburg.”

The team began preparations to go fully remote about two weeks earlier. Headsets, monitors and other necessary  equipment were distributed via curbside pickup. There were some pieces of equipment that team members weren’t able to bring home.

For example, mission planners and rover drivers rely heavily on 3D images from Mars to help them determine where to drive the rover and how far they can extend its robotic arm. At JPL, the normally use special goggles that shift rapidly between left and right-eye views to better show the contours of the terrain.

These goggles require high performance computers with advanced graphics cards. In order to view 3D images on ordinary laptops, rover drivers have switched to simple red-blue 3D glasses. While these aren’t quite as comfortable or immersive as the goggle, they are sufficient for planning drives or arm movements.

The team also had to adjust how they worked together during planning sessions. Team members at JPL usually work with hundreds of scientists from research institutions all over the world in order to decide where to drive Curiosity and which rock targets to examine. While working remotely with these scientists isn’t new, working apart from teammates usually based at JPL is.

“We’re usually all in one room, sharing screens, images and data. People are talking in small groups and to each other from across the room,” said Alicia Allbaugh, who leads the team.

Now the team collaborates by holding several conferences at once and using messaging apps. The team conducted several tests and one full practice run before planning the drilling operation at “Edinburg.”

Science operations team chief Carrie Bridge makes sure that team members understand each other by proactively talking to scientists and engineers to insure that there are no gaps in communications. Under normal circumstances, Bridge would be making her rounds to check in with several groups in the situation room where Curiosity’s images and data are viewed a commands to the rover are composed. Now she is calling into up to four video conferences a day, while also monitoring several conversations in online chats.

“I probably monitor about 15 chat channels at all times,” Bridge said. “You’re juggling more than you normally would.”

While the transition to remote-only planning and operations has taken some getting used to, Bridge feels that effort to keep Curiosity’s mission going is an example of the “can-do” spirit that attracted her to NASA.

“It’s classic, textbook NASA,” she said. “We’re presented with a problem and we figure out how to make things work. Mars isn’t standing still for us; we’re still exploring.” 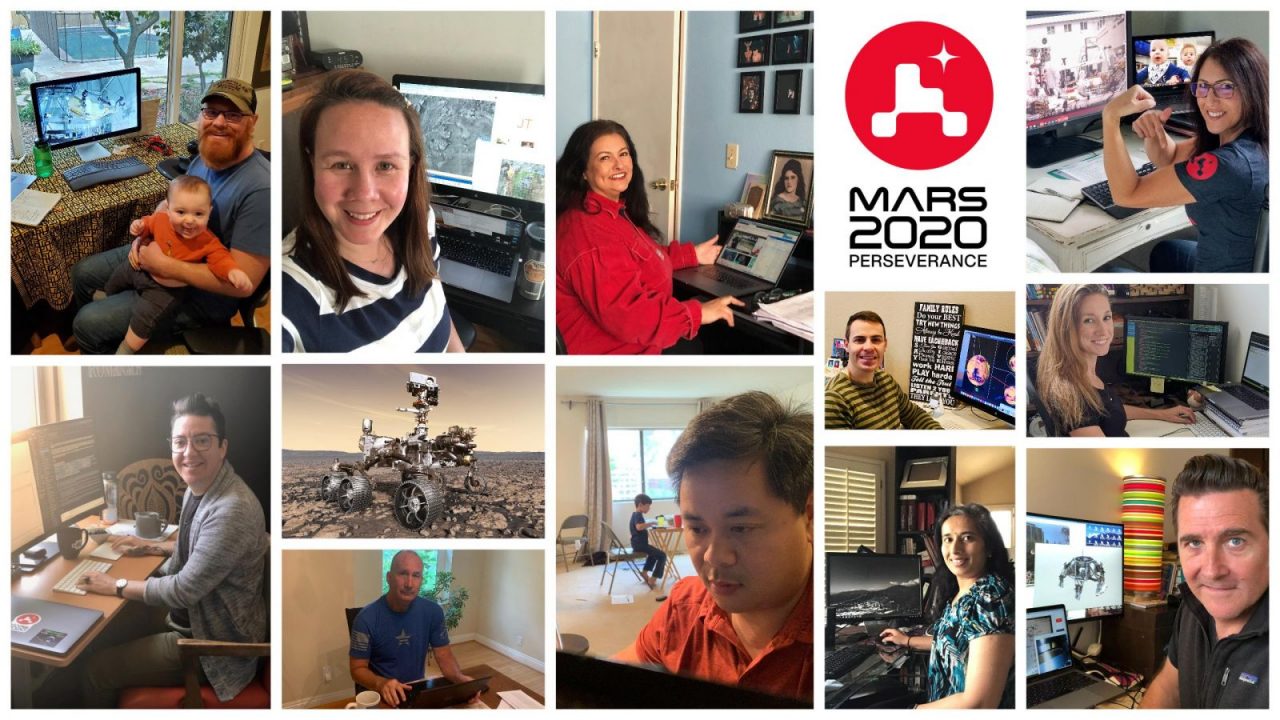 The team working to ready NASA’s Perseverance Mars rover for its July 17-August 5 launch period has also made adjustments to the way they work in this time of social distancing. The planetary alignment of Earth and Mars puts the team under considerable time pressure. If Perseverance isn’t ready to launch by August 5, the team will have to wait until September 2022 to try again.

90% of the JPL-based  Perseverance team has transitioned to working remotely. From their homes, the team is continuing to work on software, mission planning and procedures and systems engineering in prepartion for launch.

Some tasks still require a physical presence at JPL. Mission essential staff recently completed the assembly and cleaning of sample tubes that will store Martian rock and soil samples for return to Earth on a later mission.  Other mission-critical lab personnel will continue to work on-site as need, running critical tests on rover systems and software that need to be completed before launch.

To ensure the safety of personnel working on site, JPL has instituted a number of safe@work procedures  including social distancing, protective equipment and ready access to hand sanitizer and other cleaning supplies.

“NASA has determined that Perseverance is the science program that has the agency’s highest priority and the project has responded superbly to this challenge,” said Michael Watkins, director of JPL. “When we realized the pandemic would affect Lab access, we were quick to define their chief objective as being workplace safety for team members and their families, and then built a plan around that providing the clearest path to the launch pad.”

Perseverance is scheduled to launch from Cape Canaveral Air Force Station atop a United Launch Alliance (ULA) Atlas 541 booster between July 17-August 5, 2020. If all goes well, the rover will land at  Mars’ Jezero Crater on February 18, 2021. 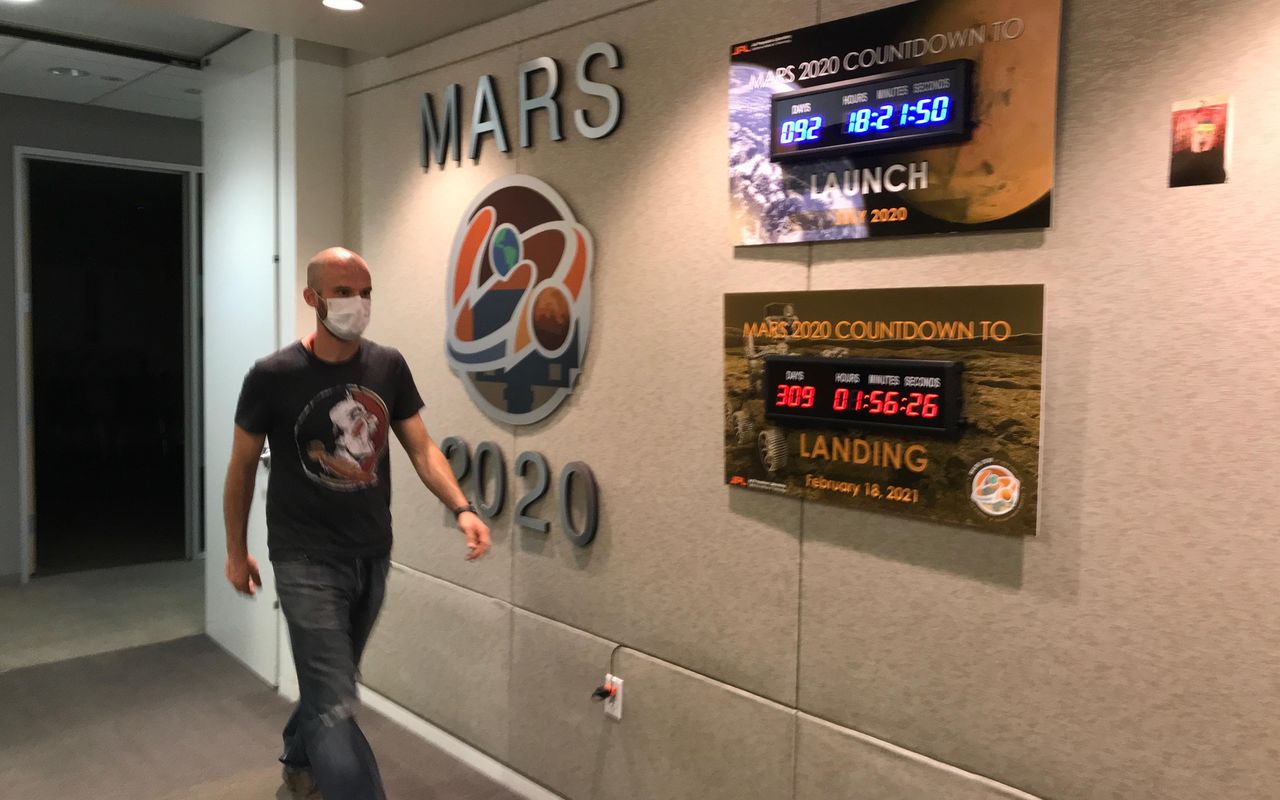 Ian Clark walks past mission countdown clocks in the Perseverance offices at JPL. Clark was needed on-Lab to supervise the assembly and cleaning of the sample tubes that will hold Martian sediment and rock. Photo Credit: NASA/JPL-Caltech