Bridenstine: Artemis mission could send first woman to the Moon 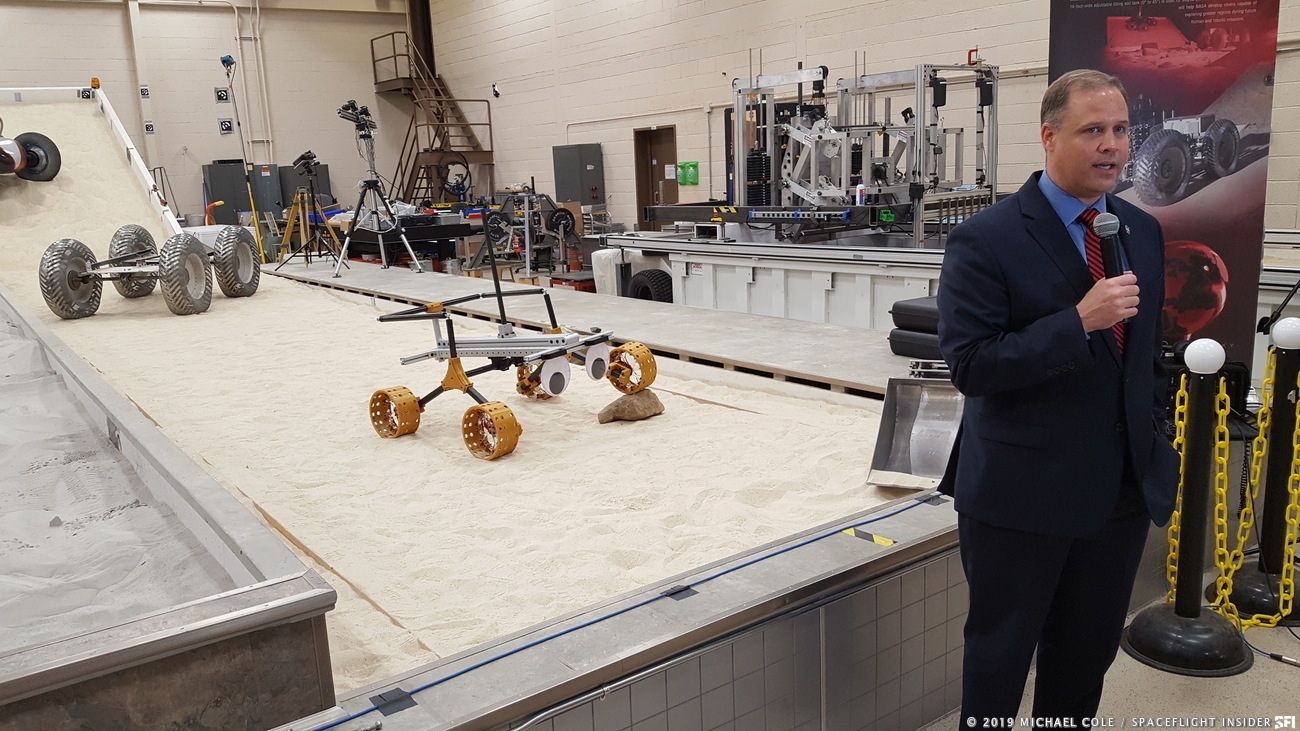 NASA Administrator Jim Bridenstine spoke to employees and members of the media at the NASA Glenn Research Center in Cleveland, Ohio, on June 10.  Bridenstine highlighted the contributions of the center to NASA’s new Artemis program, tasked with returning humans to the Moon by 2024. Photo Credit: Michael Cole / SpaceFlight Insider

GLENN RESEARCH CENTER, Ohio — NASA Administrator Jim Bridenstine paid a visit to the agency’s Glenn Research Center on Monday, June 10.  During his visit Bridenstine noted how the agency’s latest lunar initiative – could make history with the first woman walking on the Moon.

The visit was part of a trip to Cleveland, Ohio, at the invitation of Senator Rob Portman, who asked Bridenstine to speak at a meeting of the Greater Cleveland Partnership.

Bridenstine met with numerous scientists, engineers, and other employees of the center who are working on various aspects of NASA’s effort to return humans to the moon. Under President Trump’s Space Policy Directive 1, the recently named Artemis program has been tasked with the goal of returning humans to the Moon by 2024.

“Glenn provides a lot of the capabilities and a lot of the technologies necessary to utilize the resources on the surface of the Moon,” Bridenstine said.

One of those capabilities is the Kilopower reactor, a small fission reactor developed at Glenn that is designed to deliver up to 10 kilowatts of power to a lunar or martian installation for as long as 15 years.

Glenn also is developing the power and propulsion element for the Lunar Gateway, a small orbiting station around the Moon that will serve as a waypoint for missions to and from the lunar surface. The Gateway will use solar electric propulsion, a capability that Glenn has also been a leader in developing.

Bridenstine emphasized that these future missions to the Moon will be done sustainably, with the aid of commercial partners and international partners, and that utilizing the resources of the moon would be paramount. All of these efforts, he said, would be preparation for a mission to Mars. 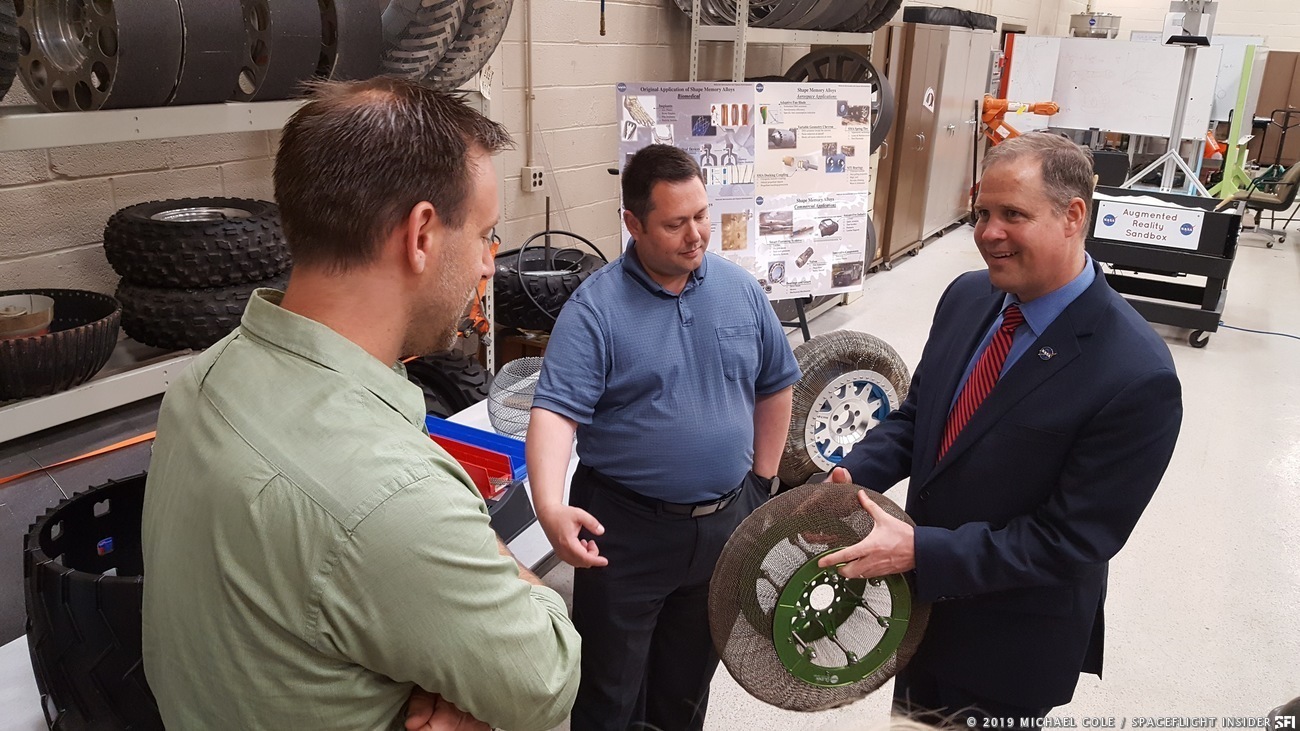 Although Mars is the destination, Bridenstine explained that the upcoming effort to return to the moon will have some special moments and accomplishments in store.

“When we go to the moon this time, we’re going under a different name,” he said. “Apollo had a twin sister, named Artemis, and she was the goddess of the Moon. This time when we go to the moon, we’re going with a very diverse and a very highly qualified astronaut corps that ultimately will enable us to land not just the next man on the moon, but the first woman on the Moon.”

Bridenstine was asked if he knew who this next man and first woman on the Moon might be.

“We will go through a very arduous process to make sure we get the right people,” he said. “It’s also true that the next man and the first woman on the surface on the Moon are already in the astronaut corps. It’s not going to be somebody who comes along today and joins. It’s going to be somebody very well experienced and has all the tools necessary to make it successful.”

Although the Space Shuttle program and the International Space Station are enormous accomplishments, it has been decades since NASA has been tasked with accomplishing a job of such magnitude as returning to the Moon.

Spaceflight Insider had a chance to ask Bridenstine what is driving the immediacy to return to the Moon, and if any changes in organization, practice, or culture, are needed at NASA to achieve it.

“We had a plan to go to the Moon in 2028,” Bridenstine told Spaceflight Insider. “And the president and vice president saw that, and they said that’s not good enough. The question is why.”

“Both of those got cancelled, Why? Because they took too long, priorities changed, administrations changed, budgets changed, congresses changed, world events happened,” he said. “So here we are, and they’re saying what is the biggest risk to landing on the Moon? I’ll tell you — political. That’s the biggest risk. We need to retire the political risk. How do you do that? You accelerate the program. You make it such that it’s in a window that it can be achieved. I said that to the president and the vice president and they gave us a budget amendment. Actually increased our budget $1.6 billion, focused on accelerating our pathway to the Moon.”

Bridenstine explained that the Artemis program to return to the Moon is not starting from scratch.

“We already have the SLS (Space Launch System rocket), the Orion crew capsule, and the European Service Module. Those are the fundamental building blocks for access to the moon. Now we need to get that Gateway, that habitat in orbit around the moon, and then at the habitat, in 2024, have aggregated at the Gateway a landing system so that we can take our next man and our first woman to the surface of the moon.”

From that landing, the missions would expand in length and complexity.

“Initially we’re going to prove that we can get there and get back to Gateway,” Bridenstine said. “By the year 2028 we want to have a sustainable presence on and around the Moon, and I would imagine by then we would have weeks of duration on the surface of the moon.”

The next milestone in the program is the Ascent Abort-2 (AA-2) test in early July at Cape Canaveral. AA-2 is a test of Orion’s Launch Abort System (LAS), which would carry the Orion crew capsule away from the rocket in case of a malfunction during launch.

The Orion crew capsule and European Service Module for the uncrewed Artemis 1 mission are currently in the process of being mated at Kennedy Space Center (KSC) in Florida. They are scheduled to be flown to Glenn’s sister facility, Plum Brook Station, in Sandusky, Ohio, for thermal vacuum testing sometime in September.