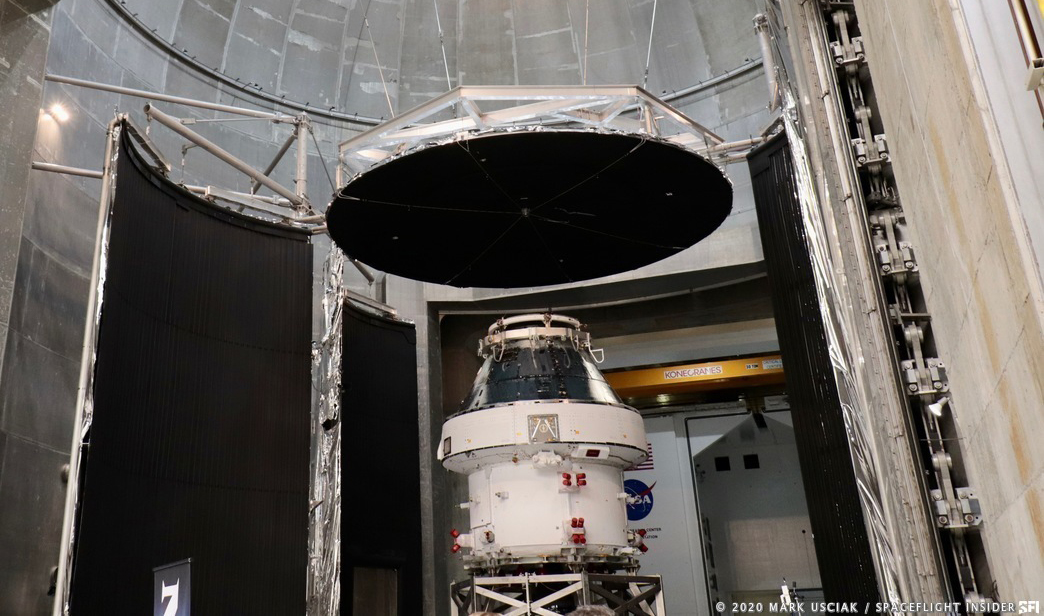 The Artemis I Orion spacecraft sits inside the giant thermal vacuum chamber at NASA’s Plum Brook Station testing facility in Sandusky, Ohio, during a media event marking the end of environmental testing on the spacecraft. Orion will soon be returning to Kennedy Space Center and is scheduled for launch in 2021. Credit – Mark Usciak, SpaceFlight Insider

SANDUSKY, OHIO — NASA’s Orion spacecraft, due to fly the Artemis I lunar mission, has completed its final round of testing at NASA’s Plum Brook Station testing facility in Sandusky, Ohio. A media event to mark the testing’s completion was held on Saturday, March 14, in the high bay just outside of Plum Brook’s thermal vacuum chamber, the largest in the world. It was inside that chamber that the Orion crew capsule and the European Service Module (ESM) have been undergoing a rigorous test campaign since mid-December. 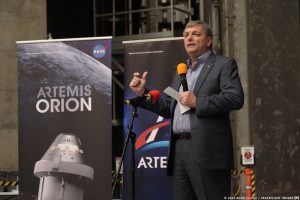 “It’s this spacecraft right behind me that, about a year from now, will be on its way to the Moon, taking the first unmanned test flight from the Earth back to the Moon since the end of the Apollo program,” said Mark Kirasich, Orion Program Manager. “Throughout the fifty-some odd days that we were in the chamber with the spacecraft, first of all, the facility performed flawlessly. It was very easy to execute the test. And even better for me, the spacecraft was incredible. Everything worked exactly as designed. We really had no issues throughout the test.”

Arriving in Ohio from Kennedy Space Center (KSC) via NASA’s Super Guppy transport aircraft in late November, the spacecraft caused a minor spectacle as it was transported over a 41-mile stretch of rural northeast Ohio roads from the Mansfield Lahm Airport to its destination at Plum Brook.

Once inside Plum Brook’s Space Environments Complex, the spacecraft was surrounded by a specially designed Heat Flux system, which looks like a metal cage shaped in the outline of the spacecraft. The Heat Flux system was key to performing the heated portion of the thermal test, bringing the environment up to 300 degrees Fahrenheit. 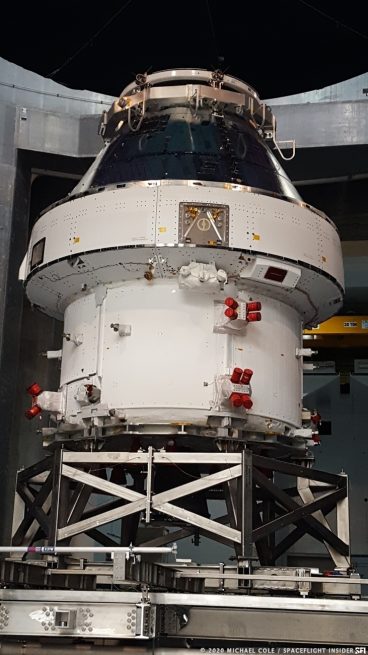 The Artemis I Orion spacecraft sits inside the thermal vacuum chamber at the completion of environmental testing at NASA’s Plum Brook Station in Sandusky, Ohio. The spacecraft is completely assembled save for the installation of its solar arrays. The thermal shrouds necessary for testing the spacecraft needed to be placed too close to allow the attachment of the solar arrays, which will be attached when the spacecraft arrives at Kennedy Space Center later this spring. Credit — Michael Cole, SpaceFlight Insider

The spacecraft and the Heat Flux system were then surrounded by a cryo shroud that allowed the cold portion of the thermal test to occur, bringing the temperature down to -250 degrees Fahrenheit. The vacuum chamber’s giant doors were then closed, and the chamber’s atmosphere was evacuated to replicate space conditions.

The thermal vacuum chamber testing began five days before Christmas and subjected the Artemis 1 spacecraft to a series of hot and cold tests over about an eight-week period. In order to thoroughly evaluate the spacecraft’s system operations under the stresses of all potential temperatures, test engineers lowered the chamber’s temperature to the cold extreme, gradually increased it to reach the intended heat extreme and then decreased back to local ambient temperature.

Following the thermal tests, which were completed toward the end of February, the spacecraft was hauled out of the vacuum chamber, and the cryo shroud and Heat Flux system were removed. Artemis 1 was then prepared for electromagnetic interference (EMI) testing. Once the spacecraft was wired with all the sensors and instruments for the EMI tests, it was moved back into the thermal vacuum chamber, but the chamber was not pumped down.

“This chamber, it turns out, is a really great reverberant radio frequency chamber,” said Nicole Smith, Orion testing Project Manager at Plum Brook. This is due to the shape of the chamber and the fact that the chamber’s walls are made of aluminum. “We seal up the chamber, so that none of the RF can get out of the chamber. And then we can bathe the spacecraft in RF signals to test all of the electronic equipment and make sure it keeps working if it has an external source of radio frequency.”

After 14 days of EMI testing, the tests were successfully completed on March 9.

The Orion capsule will soon be reloaded onto its transport trailer and driven back to the Mansfield airport and loaded back aboard the Super Guppy for its flight back to KSC. It is currently scheduled to arrive at KSC on the morning of March 24.

Those tasks, Kirasich said, should take until about the beginning of June. At that point the spacecraft will be turned over to the Ground Processing organization at KSC to begin its integration process with the core stage of the SLS (Space Launch System) rocket, currently undergoing its own tests at the Stennis Space Center in Mississippi. The entire assembly is currently scheduled to be integrated at KSC in the spring timeframe of 2021.

In the last decade, Plum Brook Station has undergone a $150 million upgrade to its testing facilities, much of it in anticipation of the arrival of Orion. The completion of the Artemis 1 spacecraft testing marks the facility’s latest contribution to NASA’s manned spaceflight program. Plum Brook previously tested an ESM test article in its reverberant acoustic testing facility and its mechanical vibration facility in 2016. The facility also conducted acoustic testing on the Orion Abort Ascent 2 capsule in 2018. 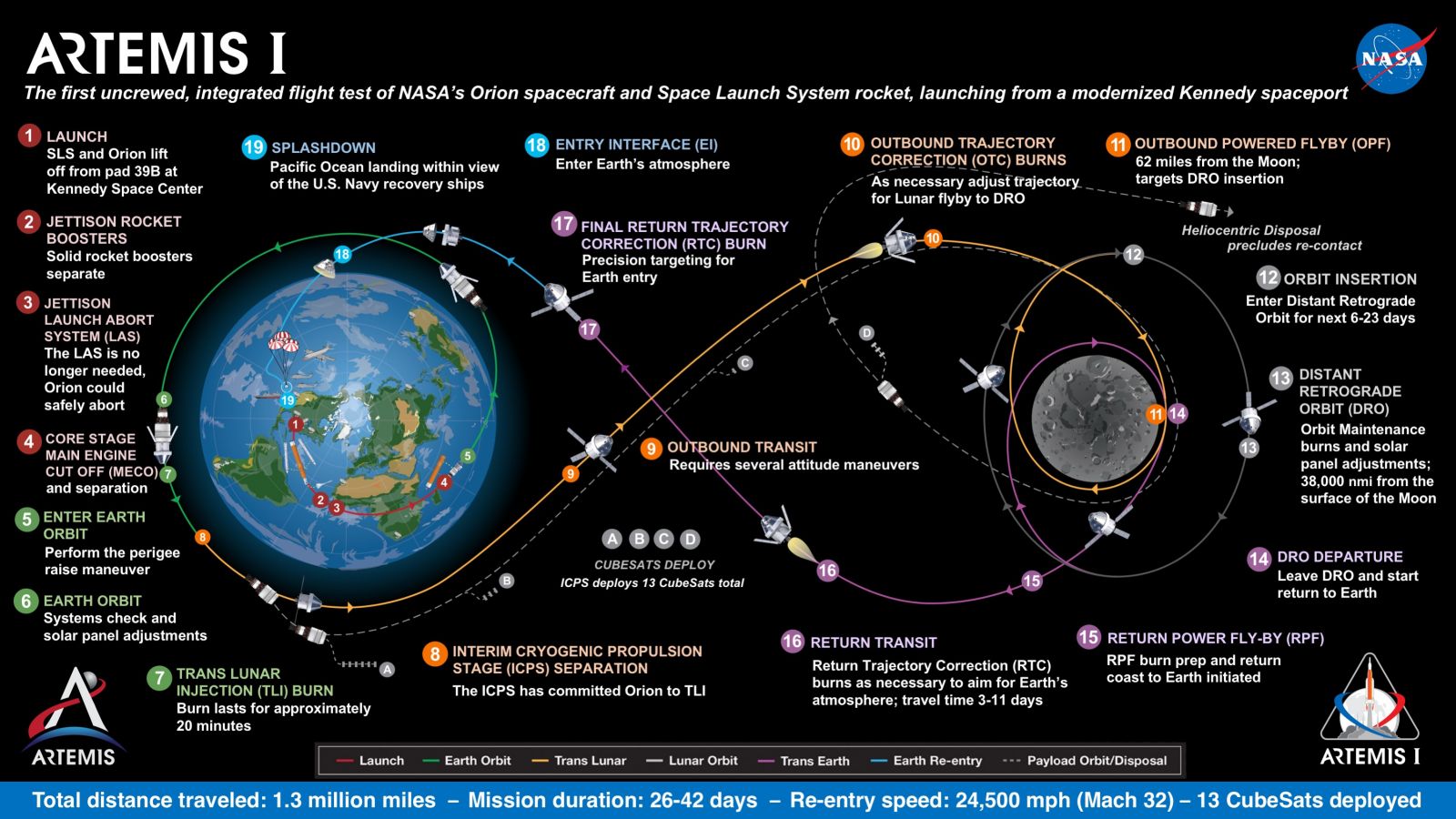 During the Artemis I mission, an uncrewed Orion spacecraft will allow NASA to demonstrate their commitment and capability to extend human existence to the Moon and beyond. The mission will launch on the most powerful rocket in the world and travel thousands of miles beyond the Moon, farther than any spacecraft built for humans has ever flown, over the course of about a three-week mission. Credit — NASA