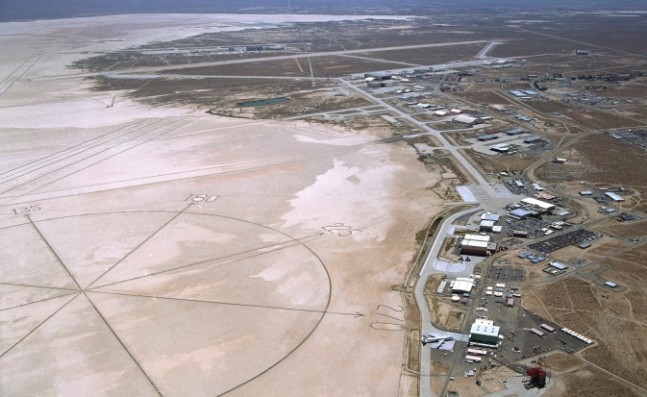 NASA's Dryden Flight Research Center has been renamed in honor of former research test pilot and NASA astronaut Neil A. Armstrong, the first man to step onto the Moon during Apollo 11. Photo Credit: Carla Thomas / NASA

Today,  NASA officials and engineers descended upon what was known as Dryden Flight Research Center which is located in Edwards, California. This is not an arbitrary meeting however, it was a solemn affair meant to rename the historic location in honor of one lost – the first man to walk on the surface of another world – Neil Alden Armstrong.

Dryden will now be known as NASA’s Armstrong Flight Research Center. The facility is where the space agency focuses on the first “A” in its name – aeronautics. Atmospheric flight research has been the focus of the structure which was named in honor of the late Hugh L. Dryden back in 1976. His legacy has not been forgotten. His name will continue to grace the center’s 12,000-square-mile Western Aeronautical Test Range as the Dryden Aeronautical Test Range. Although remembered primarily for his role on the famous first lunar landing mission, Armstrong wanted to be noted for furthering the cause of aviation. Photo Credit: NASA

Armstrong, a former research test pilot who served at the center before commanding the first lunar landing mission, Apollo 11 in 1969.

“I cannot think of a more appropriate way to honor these two leaders who broadened our understanding of aeronautics and space exploration,” said NASA’s Administrator Charles Bolden. “Both Dryden and Armstrong are pioneers whose contributions to NASA and our nation still resonate today. Armstrong was the first person to walk on the moon. Dryden’s expertise at the National Advisory Committee for Aeronautics and then at NASA established America’s leadership in aerospace, and his vision paved the way for Armstrong to take those first steps.”

The decision to rename the center was led by Rep. Kevin McCarthy of California’s 22nd district. The resolution passed unanimously early last year, a rare feat in the divided political landscape which surrounds us. President Obama then signed the measure into law on January 16. Armstrong furthered the cause of space exploration through his flights on the X-15, Gemini XIII and Apollo 11. Photo Credit: NASA

Armstrong served as a research test pilot at the center which would bear his name from 1955 until 1962. He would accrue more than 2,400 hours at Dryden – in 48 different aircraft. While Armstrong would command both Gemini VIII and Apollo 11 – he also flew NASA’s X-15 rocket plane and contributed to the X-20 Dyna Soar program.

Not long after his lunar landing mission, Armstrong left NASA and the astronaut corps for a life in academia.

Although there has been some minor complaints raised about the renaming – such an event has happened before. In 1999, then Lewis Research Center was renamed in honor of Ohio Senator John Glenn. Glenn was the first American to orbit the Earth in his Friendship 7 Mercury capsule in 1962. A formal ceremony to denote the center’s new name is slated to take place this spring.