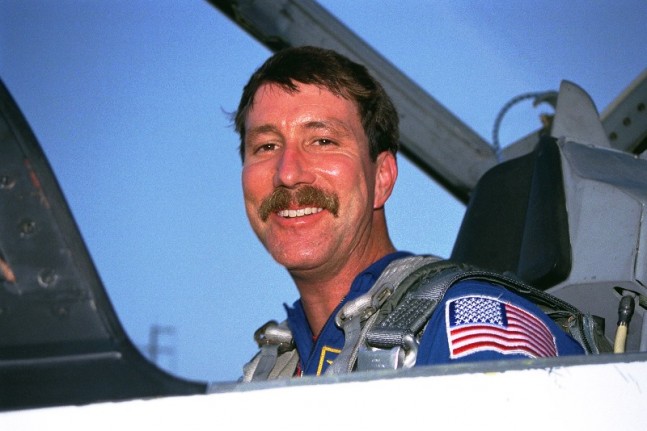 Kent Rominger beams from inside the cockpit of a T-38 jet. Photo Credit: NASA

CAPE CANAVERAL, Fla — If you have ever wanted to chat with an astronaut and an aerospace expert – SpaceFlight Insider is working to open the doors to provide you with just such an opportunity. At 2 p.m. EDT on May 8 we will be hosting a “Tweet Chat” with former space shuttle astronaut Kent Rominger. “Rommel” is a five-time space shuttle veteran and currently works for ATK which produces solid-rocket engines for the Antares and Delta IV Medium family of launch vehicles as well as the boosters which will be used on NASA’s new heavy-lift booster – the Space Launch System.

Interested in attending and want to ask an astronaut questions about what it is like to live and work in space? Simply go to Twitter, follow: @SpaceflightGrp and join the conversation – be sure to use the hashtag #SPACECHAT. It is our hope that this will be the first of many such chats as we strive to open the doors of the space business to the world.

EXPERIENCE: Rominger received his commission through the Aviation Reserve Officer Candidate (AVROC) Program in 1979, and was designated a Naval Aviator in September 1980. Following training in the F-14 Tomcat, he was assigned to Fighter Squadron Two (VF-2) from October 1981 to January 1985 aboard the USS Ranger and USS Kitty Hawk. While assigned to VF-2 Rominger attended the Navy Fighter Weapons School (Topgun). In 1987 he completed the Naval Postgraduate School/Test Pilot School Cooperative Program, and was assigned as F-14 Project Officer to the Carrier Suitability Branch of the Strike Aircraft Test Directorate at Patuxent River, Maryland. During his tour of duty Rominger completed the initial carrier suitability sea trials of the F-14B, logging the first aircraft carrier arrestment and catapult launch in the upgraded Tomcat. In September 1990 he reported to Fighter Squadron Two Hundred Eleven (VF-211) where he served as Operations Officer and completed a Desert Storm Deployment to the Arabian Gulf aboard USS Nimitz. He has logged over 7,000 flying hours in over 35 types of aircraft and 685 carrier landings.

NASA EXPERIENCE: Selected by NASA in March 1992, Rominger reported to the Johnson Space Center in August 1992. He completed one year of training and is qualified for assignment as a pilot on future Space Shuttle flight crews. Rominger was initially assigned to work technical issues for the Astronaut Office Operations Development Branch. He also served as Chief of the Astronaut Office Shuttle Operations Branch, Deputy Director, Flight Crew Operations, and Chief of the Astronaut Corps. .A veteran of five space flights, Rominger logged over 1,600 hours in space. He flew as pilot on STS-73 (1995), STS-80 (1996) and STS-85 (1997), and was the crew commander on STS-96 (1999) and STS-100 (2001). In April 2005 he retired from the Navy. Rominger retired from NASA in September 2006 to accept a position with ATK Launch Systems, Utah.

STS-80 Columbia (November 19 to December 7, 1996) was a 17-day mission during which the crew deployed and retrieved the Wake Shield Facility (WSF) and the Orbiting Retrievable Far and Extreme Ultraviolet Spectrometer (ORFEUS) satellites. The free-flying WSF created a super vacuum in its wake and grew thin film wafers for use in semiconductors and other high-tech electrical components. The ORFEUS instruments, mounted on the reusable Shuttle Pallet Satellite, studied the origin and makeup of stars. In completing his second space flight, Rominger orbited the earth a record 278 times, traveled over 7 million miles and logged 17 days, 15 hours and 53 minutes in space.

STS-85 Discovery (August 7-19, 1997) was a 12-day mission during which the crew deployed and retrieved the CRISTA-SPAS satellite, operated the Japanese Manipulator Flight Demonstration (MFD) robotic arm, studied changes in the Earths atmosphere and tested technology destined for use on the future International Space Station. The mission was accomplished in 189 Earth orbits, traveling 4.7 million miles in 11 days, 20 hours and 27 minutes.

STS-96 Discovery (May 27 to June 6, 1999) was a 10-day mission during which the crew delivered 4 tons of logistics and supplies to the International Space Station in preparation for the arrival of the first crew to live on the station. The mission included the first docking of a Space Shuttle to the International Space Station and was accomplished in 153 Earth orbits, traveling 4 million miles in 9 days, 19 hours and 13 minutes.

STS-100 Endeavour (April 19 to May 1, 2001) was a 12-day mission during which the crew installed the Canadian-built Robotic Arm and the Rafaello Logistics Module to the International Space Station. Endeavour was docked 8-days on the most complex robotics flight in the history of the Space Shuttle program and was made up of a very diverse international crew, representing the United States, Russia, Canada and Italy. The mission was completed in 187 Earth orbits, traveling 4.9 million miles in 11 days, 21 hours and 30 minutes.

Hello! How many hours on Tomcat? Thanks

Hi Chris,
We reached to Kent, his response: “I have 2159 hours in the Tomcat.”
Sincerely and with kind regards, Jason Rhian – Editor, SpaceFlight Insider