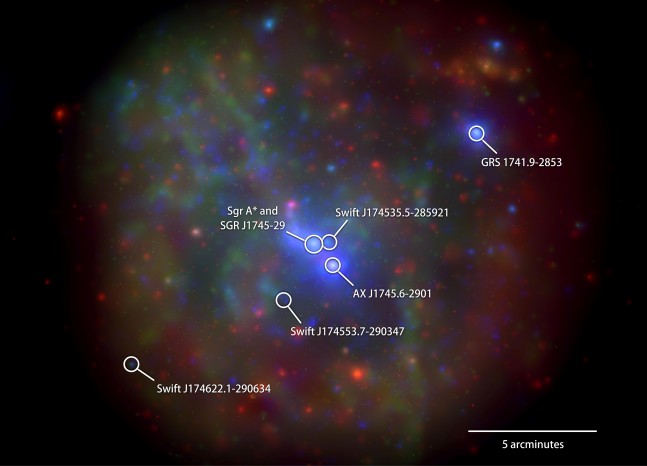 Recent observations by NASA’s Swift spacecraft have provided scientists a unique glimpse into the activity at the center of our galaxy and led to the discovery of a rare celestial entity that may help them test predictions of Albert Einstein’s theory of general relativity.

This week, at the annual meeting of the American Astronomical Society in National Harbor, Md., scientists presented their research into images captured by Swift, explaining how these images will help decipher the physical nature of X-ray flares and enabled their discovery of a rare subclass of neutron star.

Swift’s seven-year campaign to monitor the center of the Milky Way has doubled the number of images available to scientists of bright X-ray flares occurring at the galaxy’s central black hole, dubbed Sagittarius A* (Sgr A*).

Sgr A* sits in the center of the Milky Way’s innermost region, 26,000 light-years away in the direction of the constellation Sagittarius. Its mass is at least 4 million times that of the sun. Despite its considerable size, it is not nearly as bright as it could be if it was more active, according to one expert.

“Given its size, this supermassive black hole is about a billion times fainter than it could be,” said Nathalie Degenaar, principal investigator on the Swift galactic center campaign and an astronomer at the University of Michigan in Ann Arbor. “Though it’s sedate now, it was quite active in the past and still regularly produces brief X-ray flares today.”

To better understand the black hole’s behavior over time, the Swift team began making regular observations of the Milky Way’s center in February 2006. Every few days, the Swift spacecraft turns toward the innermost region of the galaxy and takes a 17-minute-long snapshot with its X-ray Telescope (XRT).

To date, Swift’s XRT has detected six bright flares during which the black hole’s X-ray emission was as much as 150 times brighter for a couple of hours. These new detections enabled the team to estimate that similar flares occur every five to 10 days. Scientists will look at differences between the outbursts to decipher their physical nature.

The Swift XRT team expects 2014 to be a banner year for the campaign. A cold gas cloud named G2, about three times the mass of Earth, will pass near Sgr A* and already is being affected by tides from the black hole’s powerful gravitational field. Astronomers expect G2 will swing so close to the black hole during the second quarter of the year that it will heat up to the point where it produces X-rays.

If some of the cloud’s gas actually reaches Sgr A*, astronomers may witness a significant increase in activity from the black hole. The event will unfold over the next few years, giving scientists a front-row seat to study the phenomena.

“Astronomers around the world are eagerly awaiting the first sign that this interaction has begun,” said Jamie Kennea, a team member at Pennsylvania State University in University Park, Pa. “With the invaluable help of Swift, our monitoring program may well provide that indicator.”

Scientists saw what they thought was a sign in April, when Swift detected a powerful high-energy burst and a dramatic rise in the X-ray brightness of the Sgr A* region. They were excited to discover the activity came from separate source very near the black hole:  a rare subclass of neutron star.

A neutron star is the crushed core of a star destroyed by a supernova explosion, packing the equivalent mass of a half-million Earths into a sphere no wider than Washington. The neutron star, named SGR J1745-29, is a magnetar, meaning its magnetic field is thousands of times stronger than an average neutron star. Only 26 magnetars have been identified to date.

The discovery of SGR J1745-29 may aid scientists in their exploration of important properties of the Sgr A* black hole. As it spins, the magnetar emits regular X-ray and radio pulses. As it orbits Sgr A*, astronomers could detect subtle changes in the pulse timing because of the black hole’s gravitational field, a prediction of Einstein’s theory of general relativity.

“This long-term program has reaped many scientific rewards, and due to a combination of the spacecraft’s flexibility and the sensitivity of its XRT, Swift is the only satellite that can carry out such a campaign,” said Neil Gehrels, the mission’s principal investigator at NASA’s Goddard Space Flight Center in Greenbelt, Md.

Goddard manages Swift, which was launched in November 2004. Goddard operates the spacecraft in collaboration with Pennsylvania State University, the Los Alamos National Laboratory in New Mexico and Orbital Sciences Corp. in Dulles, Va. International collaborators are located in the United Kingdom and Italy. The mission includes contributions from Germany and Japan.

For more about the Swift mission, visit: http://www.nasa.gov/swift