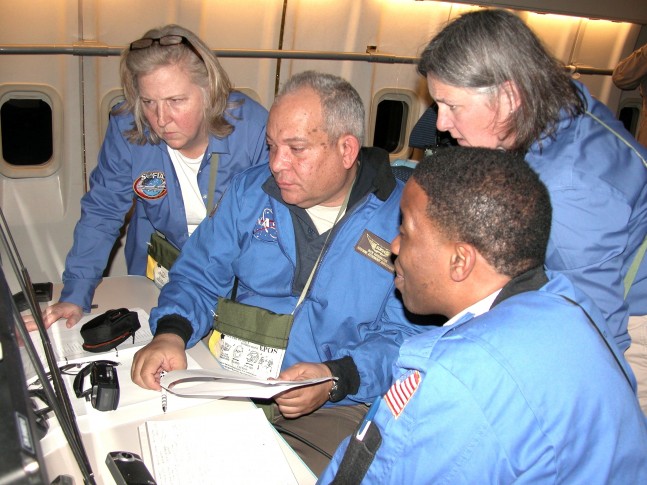 Airborne Astronomy Ambassadors (from left) Constance Gartner, Vince Washington, Ira Hardin and Chelen Johnson at the educators' workstation aboard the SOFIA observatory during a flight on the night of Feb. 12-13, 2013. (NASA / SETI Institute / Pam Harman)

NASA’s Stratospheric Observatory for Infrared Astronomy, or SOFIA, will become a flying classroom for teachers during research flights in the next few months.

Twelve two-person teams have been selected for SOFIA’s Airborne Astronomy Ambassadors program, representing educators from 10 states. Each will be paired with a professional astronomer to observe first-hand how airborne infrared astronomy is conducted. After their flight opportunities, Airborne Astronomy Ambassadors will take what they learn back to their classrooms and into their communities to promote science literacy.

SOFIA is a highly modified Boeing 747SP jetliner fitted with a 100-inch (2.5-meter) effective diameter telescope. The aircraft flies at altitudes between 39,000 and 45,000 feet (12-14 kilometers), above the water vapor in the Earth’s atmosphere, and collects data in the infrared spectrum.

“Educators are selected through a rigorous peer-reviewed process for this yearly professional development opportunity,” said astronomer Dana Backman, manager of SOFIA’s education and public outreach programs at NASA’s Ames Research Center in Moffett Field, Calif. “To date, the Airborne Astronomy Ambassadors’ program has flown 15 teams totaling 31 educators from 17 states, and we look forward to working with this new cadre of educators as they take NASA science into their communities.”

SOFIA is a joint project of NASA and the German Aerospace Center (DLR). The aircraft is based at the Dryden Aircraft Operations Facility in Palmdale, Calif. NASA’s Dryden Flight Research Center in Edwards, Calif., manages the program. Ames manages the SOFIA science and mission operations in cooperation with the Universities Space Research Association (USRA) in Columbia, Md., and the German SOFIA Institute (DSI) at the University of Stuttgart.

For information about SOFIA’s science mission and scientific instruments, visit: http://www.sofia.usra.edu and http://www.dsi.uni-stuttgart.de/index.en.html