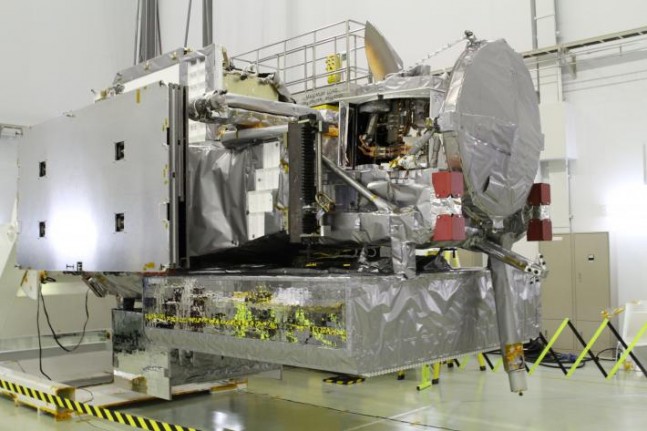 The GPM spacecraft oriented for inspections after its arrival in the clean room at Tanegashima Space Center. Photo Credit: NASA / Michael Starobin

NASA will hold a series of media events Monday, Jan. 27, in advance of the February launch of the Global Precipitation Measurement (GPM) Core Observatory from Japan. The events will be held at NASA’s Goddard Space Flight Center in Greenbelt, Md.

GPM is an international satellite mission led by NASA and the Japan Aerospace Exploration Agency (JAXA) that will provide next-generation observations of rain and snow worldwide. GPM data also will contribute to climate research and the forecasting of extreme weather events such as floods and hurricanes.

The GPM Core Observatory is scheduled to lift off Feb. 27, between 1:07 and 3:07 p.m. EST, from JAXA’s Tanegashima Space Center in Japan.

The briefings will begin at 1p.m., Jan. 27, and can be seen on NASA Television and the agency’s website. Media may ask questions from participating agency centers by telephone. To participate by phone, reporters must send an email providing name, affiliation and telephone number to Rob Gutro at robert.j.gutro@nasa.gov or 301-286-8955 by 11 a.m., Jan. 27.

Other media events at Goddard begin at 11 a.m. with a tour of the GPM control rooms followed by the screening of the new movie “Water Falls,” which highlights the science behind the GPM mission projected onto the unique “Science on a Sphere” platform. “Water Falls” debuts at select U.S. science centers in late January.

For more information about the GPM mission, visit: http://www.nasa.gov/gpm