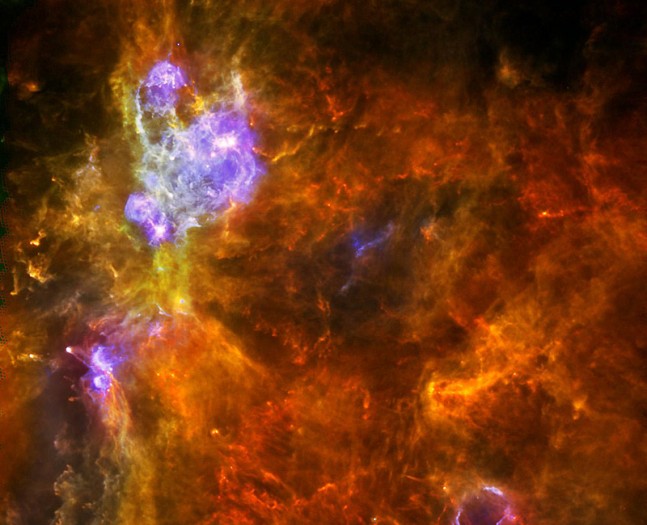 The Herschel Space Observatory has uncovered a weird ring of dusty material while obtaining one of the sharpest scans to date of a huge cloud of gas and dust, called NGC 7538. Image credit: ESA/NASA/JPL-Caltech/Whitman College

The Herschel Space Observatory has uncovered a weird ring of dusty material while obtaining one of the sharpest scans to date of a huge cloud of gas and dust, called NGC 7538. The observations have revealed numerous clumps of material, a baker’s dozen of which may evolve into the most powerful kinds of stars in the universe. Herschel is a European Space Agency mission with important NASA contributions.

“We have looked at NGC 7538 with Herschel and identified 13 massive, dense clumps where colossal stars could form in the future,” said paper lead author Cassandra Fallscheer, a visiting assistant professor of astronomy at Whitman College in Walla Walla, Washington, and lead author of the paper published in The Astrophysical Journal. “In addition, we have found a gigantic ring structure and the weird thing is, we’re not at all sure what created it.” NGC 7538 is relatively nearby, at a distance of about 8,800 light-years and located in the constellation Cepheus. The cloud, which has a mass on the order of 400,000 suns, is undergoing an intense bout of star formation. Astronomers study stellar nurseries such as NGC 7538 to better learn how stars come into being. Finding the mysterious ring, in this case, came as an unexpected bonus.

The cool, dusty ring has an oval shape, with its long axis spanning about 35 light-years and its short axis about 25 light-years. Fallscheer and her colleagues estimate that the ring possesses the mass of 500 suns. Additional data from the James Clerk Maxwell Telescope, located at the Mauna Kea Observatory in Hawaii, further helped characterize the odd ovoid. Astronomers often see ring and bubble-like structures in cosmic dust clouds. The strong winds cast out by the most massive stars, called O-type stars, can generate these expanding puffs, as can their explosive deaths as supernovas. But no energetic source or remnant of a deceased O-type star, such as a neutron star, is apparent within the center of this ring. It is possible that a big star blew the bubble and, because stars are all in motion, subsequently left the scene, escaping detection.

The observations were taken as part of the Herschel OB Young Stellar objects (HOBYS) Key Programme. The “OB” refers to the two most massive kinds of stars, O-type and B-type. These bright blue, superhot, short-lived stars end up exploding as supernovas, leaving behind either incredibly dense neutron stars or even denser black holes.

Stars of this caliber form from gassy, dusty clumps with initial masses dozens of times greater than the sun’s; the 13 clumps spotted in NGC 7358, some of which lie along the edge of the mystery ring, all are more than 40 times more massive than the sun. The clumps gravitationally collapse in on themselves, growing denser and hotter in their cores until nuclear fusion ignites and a star is born. For now, early in the star-formation process, the clumps remain quite cold, just a few tens of degrees above absolute zero. At these temperatures, the clumps emit the bulk of their radiation in the low-energy, submillimeter and infrared light that Herschel was specifically designed to detect. As astronomers continue probing these budding O-type giants in NGC 7358, the follow-up observations with other telescopes should also help in solving the puzzle of the humongous, dusty ring. “Further research to determine the mechanism responsible for creating the ring structure is necessary,” said Fallscheer.

Herschel is a European Space Agency mission, with science instruments provided by consortia of European institutes and with important participation by NASA. While the observatory stopped making science observations in April 2013, after running out of liquid coolant as expected, scientists continue to analyze its data. NASA’s Herschel Project Office is based at the Jet Propulsion Laboratory in Pasadena, California. JPL contributed mission-enabling technology for two of Herschel’s three science instruments. The NASA Herschel Science Center, part of the Infrared Processing and Analysis Center at the California Institute of Technology in Pasadena, supports the U.S. astronomical community.