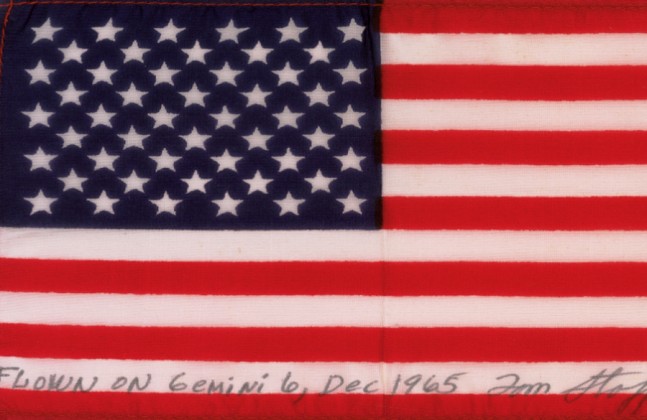 BOSTON, MA – (Nov. 21, 14) An extremely rare and highly-desirable flown oversize American flag, carried into lunar orbit aboard Apollo 10 in May 1969, sold for $54,412 on Thursday according to Massachusetts-based RR Auction.

Originating directly from the collection of Thomas P. Stafford, all proceeds from the sale of this item will go towards raising funds for the building of a 1:1 scale X-1 model at the Stafford Air and Space Museum, in Weatherford, OK.

The oversize fabric American flag, measuring 18 x 12, is signed in black ink on the lowermost white stripe by two members of the Apollo 10 crew, “Flown to the moon on Apollo X, May 1969, Tom Stafford,” and “Gene Cernan.”

Accompanied by a photo of Stafford holding the item, as well as a signed letter of authenticity from Stafford.

Only about a dozen or so of these size flags were carried on the mission, and less than a handful are signed. Complete crew-signed flags from Apollo missions are quite uncommon, and the larger flags are almost never offered for sale. Combined with the fact that this flag set a record for highest speed attained by a manned vehicle at 24,791 mph, this vibrantly colored flown piece is an especially desirable offering.

“We are thrilled to be able to work with astronauts like General Stafford and help them finance a permanent display of their incredibly important Apollo artifacts,” said Bobby Livingston, Exec VP at RR Auction.

Among other museum quality pieces from Stafford’s collection:

The Space and Aviation Autograph and Artifact Auction began on November 13 and ended on November.More details can be found online at www.rrauction.com.