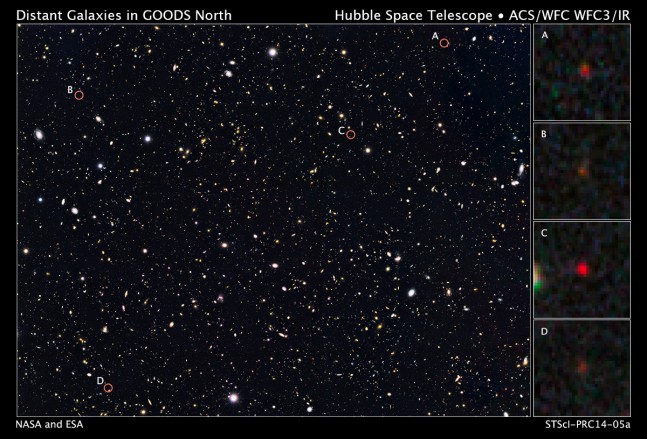 This is a portion of a deep-sky Hubble Space Telescope survey called GOODS North (Great Observatories Origins Deep Survey). The view is a composite of images taken in visible and near-infrared light. Researchers have circled four unusually red objects that appear as they existed just 500 million years after the big bang. They appear red because their light has been stretched to longer infrared wavelengths by the expansion of the universe. These extremely compact and bright galaxies present a puzzle to researchers because they are much more luminous than anything previously seen at such an early epoch. The young galaxies are bright because they are forming stars at a much faster rate than for other galaxies found at such early times. NASA, ESA, G. Illingworth (University of California, Santa Cruz), P. Oesch (University of California, Santa Cruz; Yale University), R. Bouwens and I. Labbé (Leiden University), and the Science Team

NASA’s Hubble Space Telescope is providing a new perspective on the remote universe, including new views of young and distant galaxies bursting with stars. Scientists described the findings Tuesday in a news conference sponsored by the American Astronomical Society (AAS).

Highlighted in the briefing were three discoveries — four unusually bright galaxies as they appeared 13 billion years ago, the deepest image ever obtained of a galaxy cluster, and a sampling of galaxies thought to be responsible for most of the stars we see today.

The ultra-bright, young galaxies, discovered using data from NASA’s Hubble and Spitzer space telescopes, are bursting with star formation activity, which accounts for their brilliance. The brightest one is forming stars approximately 50 times faster than our Milky Way galaxy does today. These fledgling galaxies are only one-twentieth the size of the Milky Way, but they probably contain about 1 billion stars crammed together.

Although Hubble has previously identified galaxies at this early epoch, astronomers were surprised to find objects that are about 10 to 20 times more luminous than anything seen previously.

“These just stuck out like a sore thumb because they are far brighter than we anticipated,” explained Garth Illingworth of the University of California at Santa Cruz. “There are strange things happening regardless of what these sources are. We’re suddenly seeing luminous, massive galaxies quickly build up at such an early time. This was quite unexpected.”

The galaxies were first detected with Hubble. Its sharp images are crucial to finding such distant galaxies and enabled the astronomers to measure their star-formation rates and sizes. Using Spitzer, the astronomers were able to estimate the stellar masses by measuring the total stellar luminosity of the galaxies.

“This is the first time scientists were able to measure an object’s mass at such a huge distance,” said Pascal Oesch of Yale University in New Haven, Conn. “It’s a fabulous demonstration of the synergy between Hubble and Spitzer.”

The result bodes well for NASA’s James Webb Space Telescope, currently in development. Scientists anticipate using Webb to look even farther back in time to find young, growing galaxies as they existed only a few hundred million years after the universe began in theorized big bang.

An unprecedented long distance view of the universe comes from an ambitious collaborative project with Hubble called The Frontier Fields. It is the longest and deepest exposure obtained to date of a cluster of galaxies, and shows some of the faintest and youngest galaxies ever detected. The image contains several hundred galaxies as they looked 3.5 billion years ago.

Appearing in the foreground of the image is Abell 2744, a massive galaxy cluster located in the constellation Sculptor. The immense gravity in Abell 2744 is being used as a lens to warp space and brighten and magnify images of more distant background galaxies. The more distant galaxies appear as they did longer than 12 billion years ago, not long after the big bang.

The Hubble exposure will be combined with images from Spitzer and NASA’s Chandra X-ray Observatory to provide new insight into the origin and evolution of galaxies and their accompanying black holes.

Hubble also uncovered a substantial population of 58 young, diminutive galaxies that scientists long suspected were responsible for producing a majority of stars now present in the cosmos during the universe’s early years.

Deep exposures in ultraviolet light, made with Hubble’s Wide Field Camera 3, revealed a sampling of galaxies that existed more than 10 billion years ago, when the universe was roughly 3.4 billion years old. They are the smallest, faintest, galaxies seen in the remote universe to date. A census of galaxies existing at the time indicates these small, faint galaxies are 100 times more abundant in the universe than their more massive cousins.

“There’s always been a concern that we’ve only found the brightest of the distant galaxies,” said Brian Siana of the University of California at Riverside. “The bright galaxies, however, represent the tip of the iceberg. We believe most of the stars forming in the early universe are occurring in galaxies we normally can’t see at all. Now we have found those ‘unseen’ galaxies, and we’re really confident that we’re seeing the rest of the iceberg.”

Normally too faint for Hubble to see, these galaxies were revealed through gravitational lensing focused on a massive galaxy cluster known as Abell 1689 in the constellation Ursa Major. The cluster magnified light emitted by distant objects behind it, causing the newly discovered galaxies to appear bigger and brighter. If this sample is representative of the entire population at the time, then the majority of new stars formed in such small, unseen galaxies.

“Though these galaxies are very faint, their increased numbers mean that they account for the majority of star formation during this epoch,” said team member Anahita Alavi, also of the University of California at Riverside.

The astronomers were surprised to find the deeper they looked with Hubble, the more faint galaxies they found.

“Our goal with these observations was not to find a large number of galaxies, but to find much fainter galaxies,” said Alavi.

For images and more information about the ultra-bright young galaxies, visit: http://hubblesite.org/news/2014/05

To see more images and information about The Frontier Fields campaign, visit: http://hubblesite.org/news/2014/01

For more information about the Hubble Space Telescope, visit: http://www.nasa.gov/hubble