The private space industry has chalked up yet another “win.” This time it came with the announcement that a recent test flight of the VSS Unity had earned two Virgin Galactic pilots astronaut wings.

Test Pilots Mark “Forger” Stucky and Fredrick “CJ” Sturckow were presented with their astronaut wings on Feb. 7, 2019, by the Federal Aviation Administration in recognition of the altitude they reached during their Dec. 13, 2018, flight. They were presented to them by U.S. Secretary of Transportation Elaine Chao. 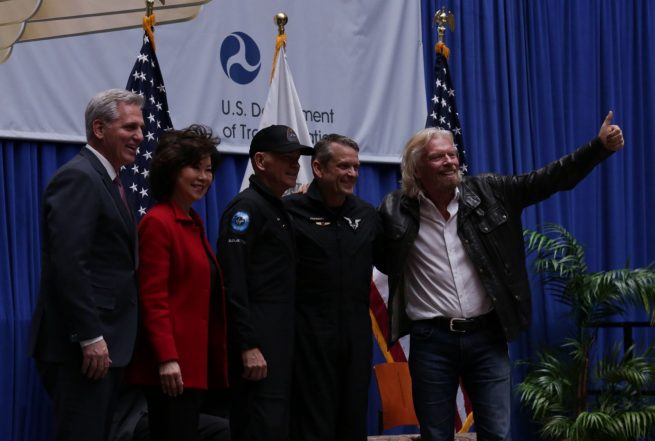 “We are entering a new and exciting frontier in our nation’s space activities,” Chao said. “These wings represent a remarkable achievement for these crew members and tell all Americans that their access to the wonders of space may be within their reach.”

As a former NASA Space Shuttle astronaut, Sturckow already has been to space. In fact, the spaceflight veteran traveled some 250 miles above Earth’s atmosphere to the International Space Station on four assembly missions Between 1998 and 2009.

The distance to the orbiting lab far exceeds the 51.4 miles (82.7 kilometers) that he and Stucky obtained during the December 2018 SpaceShipTwo test flight. He is now the only person to have earned both NASA and FAA astronaut wings.

“The U.S. leads the world both in the exploration of space and in creating the conditions for a new space age, where it will operate alongside and in partnership with the private sector,” said Richard Branson, the founder of Virgin Group, the parent company of Virgin Galactic. “While today’s awards ceremony is, of course, a proud moment for our wonderful pilots and the whole Virgin Galactic team, it is also symbolic of an enabling regulatory framework that allows for innovation while prioritizing safety. It is this which has allowed us to pursue our dreams and which will ultimately underpin our commercial success as we seek to democratize space for the benefit of humankind.”

The FAA is the organization that handles all of the operations that deal with all aspects of the emerging commercial space arena in the U.S. and they don’t make it easy on those claiming to have obtained the lofty title of “astronaut.” They must reach an altitude 50 miles (80 kilometers) on a flight that has been licensed by the federal agency.

No FAA license for your flight but you reach that altitude? No wings for you.

SpaceShipTwo is a suborbital spacecraft designed to take paying customers or experiments just above the boundary of space.

The December 2018 flight was the fourth powered flight test of VSS Unity, Virgin Galactic’s second serial number to be built and the first to reach the U.S. definition of space (the Internationally recognized boundary is currently set at 62 miles or 100 kilometers).

The test started with VSS Unity being carried between the twin fuselages of the WhiteNightTwo aircraft to take off from the runway at the Mojave Air and Space Port in California’s Mojave desert. Once in the air, the combined system climbed to an altitude of around 43,000 feet (13,000 meters).

Once at the correct altitude, Unity was released to glide on its own for several seconds before the two SpaceShipTwo pilots, Stucky and Sturckow, ignited its hybrid rocket motor engine. Firing for about 60 seconds, the engine pushed the spacecraft to a speed of Mach 2.9—about 2,200 mph (3,600 kph).

At the conclusion of the powered portion of the flight, Unity used its feathered wing configuration to stabilize itself during its fall back to the thicker part of the atmosphere before gliding to the runway at the Mojave Air and Space Port.

According to Virgin Galactic, Stucky and Sturckow are two of the only four Americans to receive FAA astronaut wings. The other two were awarded to Mike Melvill and Brian Binnie in 2004 when they piloted SpaceShipTwo’s predecessor, SpaceShipOne into a suborbital trajectory. Melvill reached 62 miles (100 kilometers) and 64 miles (103 kilometers) in June and September 2004, while Binnie reached 70 miles (112 kilometers) in October 2004.

Video courtesy of the FAA

Just pleased that someone ended the U.S. manned spaceflight gap. It was too much to rely upon NASA Commercial Crew.