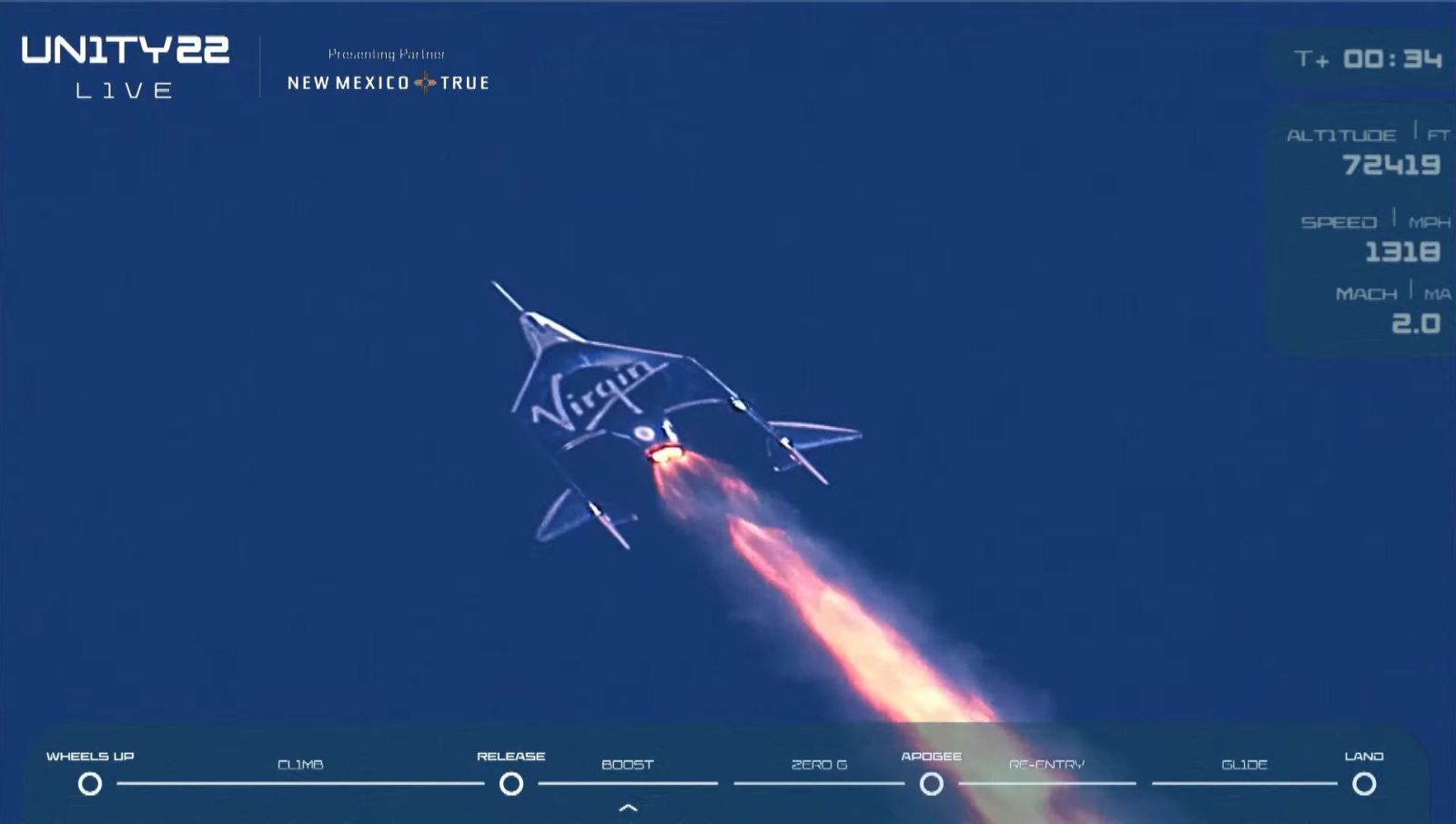 VSS Unity fires its hybrid rocket motor to place it on a suborbital trajectory into space. Aboard were two pilots and four mission specialists, including Virgin Galactic’s founder, Richard Branson. Credit: Virgin Galactic

At 8:40 a.m. MDT (14:40 UTC) July 11, 2021, the “VSS Unity” SpaceShipTwo spaceplane, carried by the “VMS Eve” WhiteKnightTwo aircraft took off from the runway at Spaceport America in New Mexico. After a 45-minute flight to a 46,000-foot (14,000-meter) cruising altitude, Unity with its two pilots and four mission specialists (including 70-year-old Branson) was released from Eve. 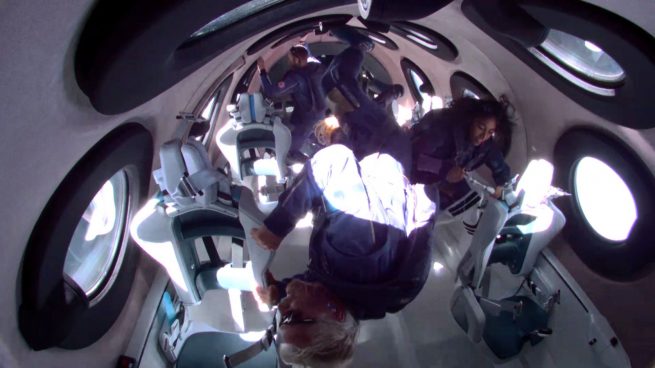 The four mission specialists float in the cabin of VSS Unity during the Unity 22 flight. Credit: Virgin Galactic

Moments later, at 9:25 a.m. MDT (15:25 UTC), the spaceplane’s hybrid rocket motor ignited to begin a roughly 60-second boost phase, accelerating the vehicle and its occupants to a speed of about 2,300 miles per hour (3,700 kilometers per hour) — three times the speed of sound, or Mach 3.

After engine cutoff, Unity coasted to a maximum altitude of 53 miles (85 kilometers) to reach the edge of space, experiencing several minutes of microgravity, before beginning its unpowered return to Spaceport America. In order to ensure the vehicle is stable during its decent back into Earth’s atmosphere, SpaceShipTwo utilizes a “feathered reentry” system, which involves rotating the wings upward to provide a shuttlecock effect. Once the atmosphere was thick enough for typical aero surfaces to function, the wing was rotated back into a glide configuration. 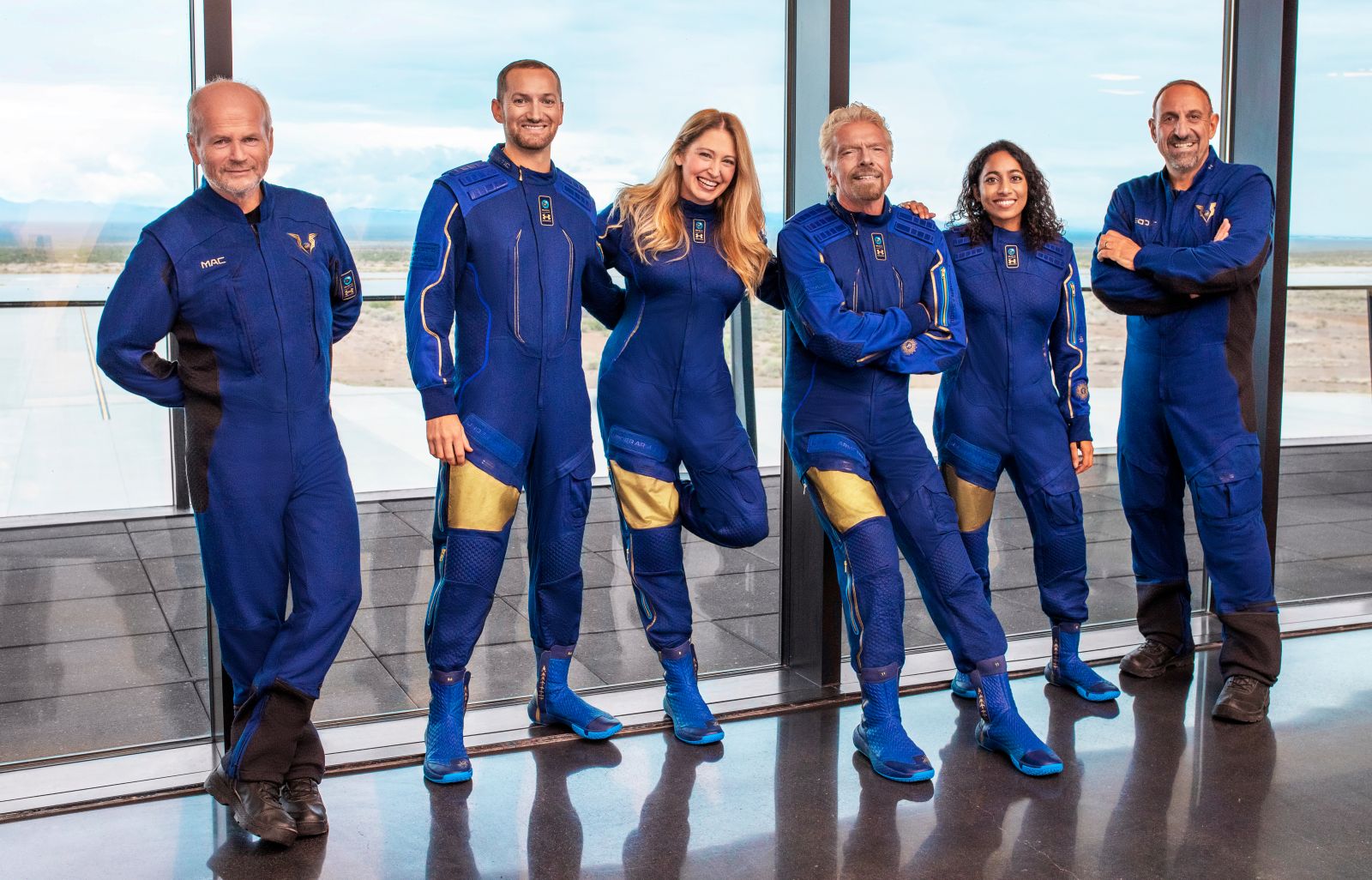 This fourth spaceflight of Unity was technically a test mission with the overall goal of the evaluation of the Virgin Galactic astronaut experience. The company said its focus will be evaluating the weightlessness experience, cabin environment, comfort, live stream capability and views of Earth to offer its paying customers along with assessing conditions for conducting research experiments for human benefit. Moses was responsible for the execution of test flight objectives. Bennett was tasked with evaluating cabin equipment, procedures and the overall experience of the flight. Bandla conducted human-tended experiments on board. Branson himself evaluated the private astronaut experience for future paying customers.

“I have dreamt about this moment since I was a child, but nothing could have prepared me for the view of Earth from space,” Branson said in a Virgin Galactic news release following the flight. “We are at the vanguard of a new space age. As Virgin’s founder, I was honored to test the incredible customer experience as part of this remarkable crew of mission specialists and now astronauts. I can’t wait to share this experience with aspiring astronauts around the world.”

Overall, this was Unity’s 22 flight test, including captive carry and glide flights. While the spaceplanes previous flights on suborbital trajectories included at least two pilots, this was the first with a full crew.

Virgin Galactic’s CEO Michael Colglazier made the decision Unity 22 was ready for launch on July 11 after data from its May 22 test flight was thoroughly analyzed. The May test flight was originally scheduled for December of 2020 but was unable to launch because SpaceShipTwo’s rocket engine failed to ignite. The company’s rocket-powered test flight in May was the first human spaceflight from its New Mexico Spaceport America facility and carried research payloads as a part of NASA’s Flight Opportunities Program.

The May 22 test flight also assessed the upgraded horizontal stabilizers and flight controls during the boost phase of that flight ahead of the Unity 22 launch.

Unity 22 was a long-time coming for the company, which was founded by Branson in 2004 with the goal of opening up suborbital spaceflight to the masses, or at least anybody with several hundred thousand dollars to spend. Building on the flights of the Scaled Composites-built and Paul Allen-funded SpaceShipOne in 2004, initial commercial suborbital flights were expected to begin more than a decade ago. However, development hurdles, testing delays as well as the 2014 breakup of the first SpaceShipTwo, VSS Enterprise, which killed one of the vehicle’s pilots, have continually delayed the program.

After today’s successful mission, the company plans two additional test flights entering commercial service in 2022. It has been reported that Virgin Galactic has sold roughly 600 tickets, each with a price tag of about $250,000.