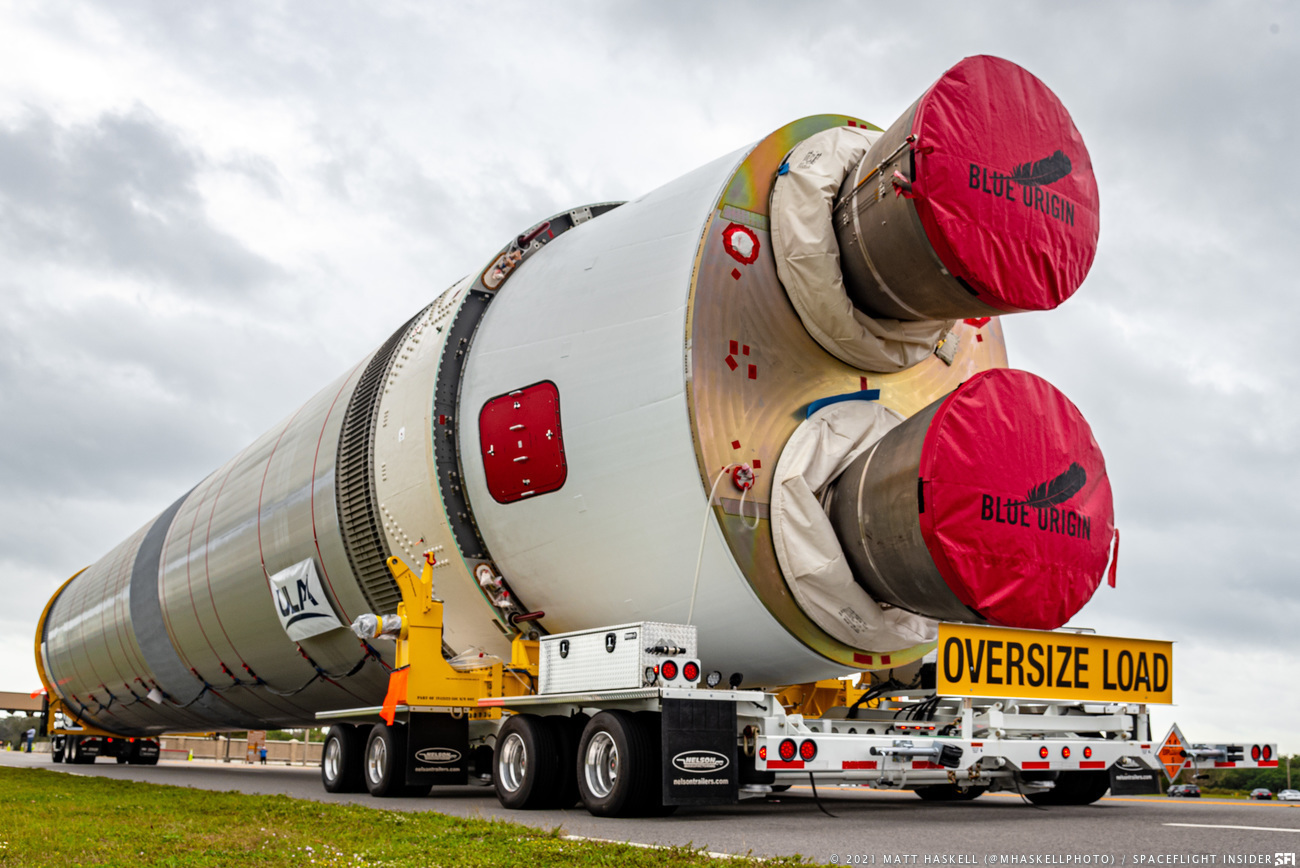 Progress continues to advance for United Launch Alliance’s newest rocket, as the pathfinder for the Vulcan rocket arrived by the company’s cargo ship and was unloaded at Cape Canaveral Space Force Station on Saturday, February 15.

A nearly flight capable booster, the Pathfinder Tanking Test (PTT) booster will be utilized for checkouts of the new rocket’s Ground Support Equipment, as well as launch and integration hardware. While visiting the pad, the PTT will also undergo a full cryogenic tanking test to verify the booster’s flight pressure integrity. While the booster is currently fitted with static fired test engines that are no longer flight capable, according to ULA CEO Tory Bruno, the PTT Booster itself will eventually fly next year, following a refit to flight engines. 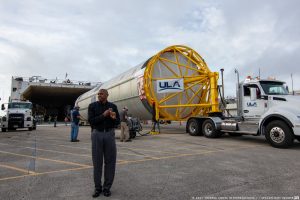 Ron Fortson, ULA’s Director of Launch Operations, welcomed the RS RocketShip to Cape Canaveral on February 13, 2021: “Today is an exciting day. We’re offloading, for the first time, the Vulcan Centaur rocket, which is going to launch in the fourth quarter of this year”. Image: Theresa Cross, Spaceflight Insider

Ron Fortson, ULA’s Director of Launch Operations, was on hand to welcome the hardware to the Cape, taking a few minutes to speak with members of the media: “Today is an exciting day. We’re offloading, for the first time, the Vulcan Centaur rocket, which is going to launch in the fourth quarter of this year”. Acknowledging the ‘changing of the guard’ that the development of Vulcan represents, he remarked that “Atlas and Delta have kind of been the backbone of launch; they have a lot of heritage throughout the last decade. Now, it’s kind of fitting that we have a new rocket here, the Vulcan, that’s going to be continuing to build upon that legacy, bringing new capabilities to the nation.”

Plans also exist for Vulcan to have some re-usability later in development, through a technology called SMART re-use. SMART, or Sensible Modular Autonomous Return, allows for the recovery and re-use of the booster’s BE-4 engines, through a process that involves the detaching of the engines from the booster mid flight, ultimately to be recovered by helicopter via parachute. The engines account for 65% of booster production costs, and 90% of the propulsion production costs, potentially saving significant funds through re-use and allowing increased competitiveness with the low cost re-usable SpaceX Falcon System.

With the PTT arrival, further progress has been made towards an inaugural launch later this year. Multiple milestones have recently been made alongside the arrival, with the Vulcan Mobile Launch Platform making its first trip to the launch pad earlier this month, as well as a successful validation ground test of the GEM 63XL solid rocket motors on January 21.

Vulcan is planned to initially fly alongside the Atlas V & Delta IV Heavy, before fully replacing the types, and has already recieved multiple launch contracts, including Sierra Nevada’s Dreamchaser cargo vehicle. Vulcan is currently targeting No Earlier Than late 2021 for its first launch, in which it will loft a private commercial mission to the Moon in the form of Astrobotic’s Peregrine lunar lander. 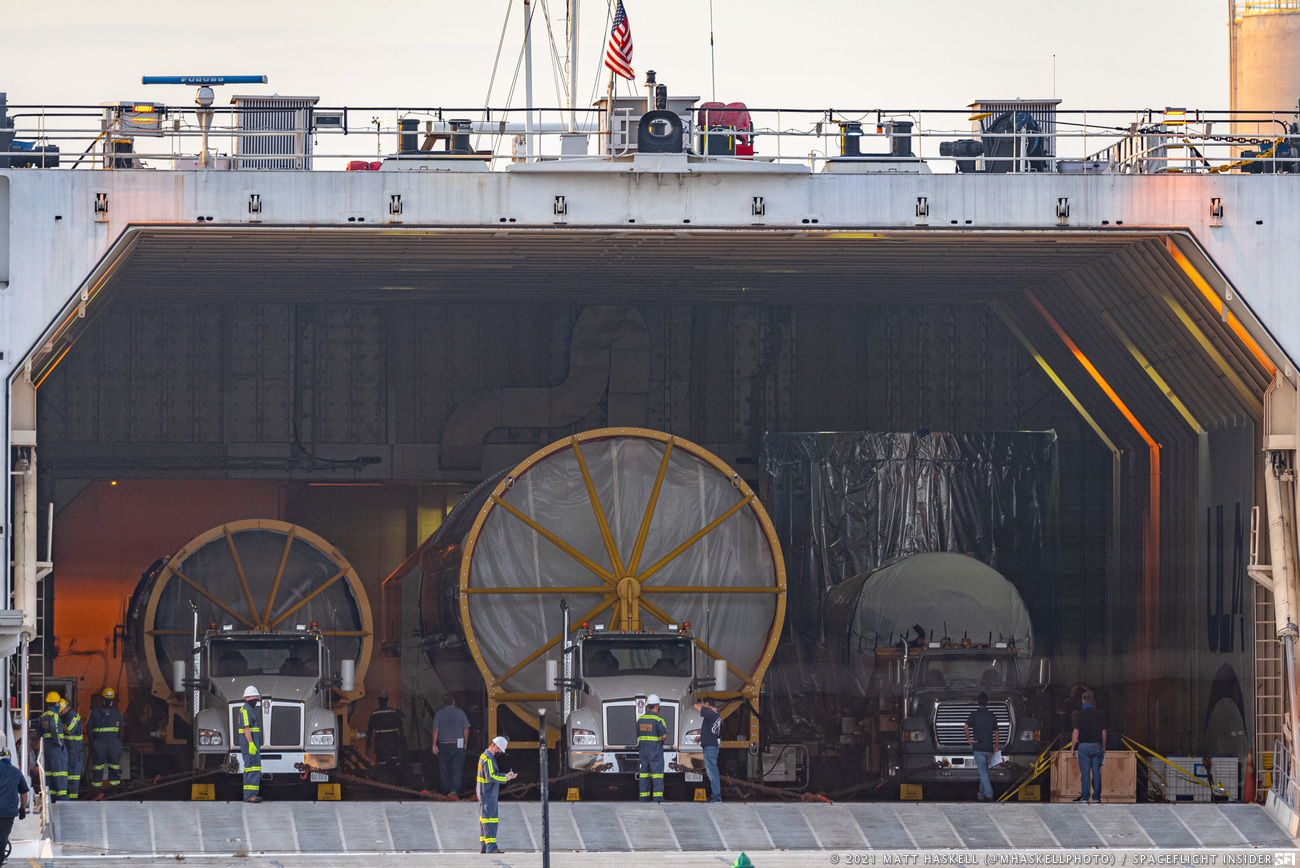 With port workers for scale, the vastness of the cargo hold for United Launch Alliance’s RS RocketShip is brought into perspective. Image: Matt Haskell, Spaceflight Insider