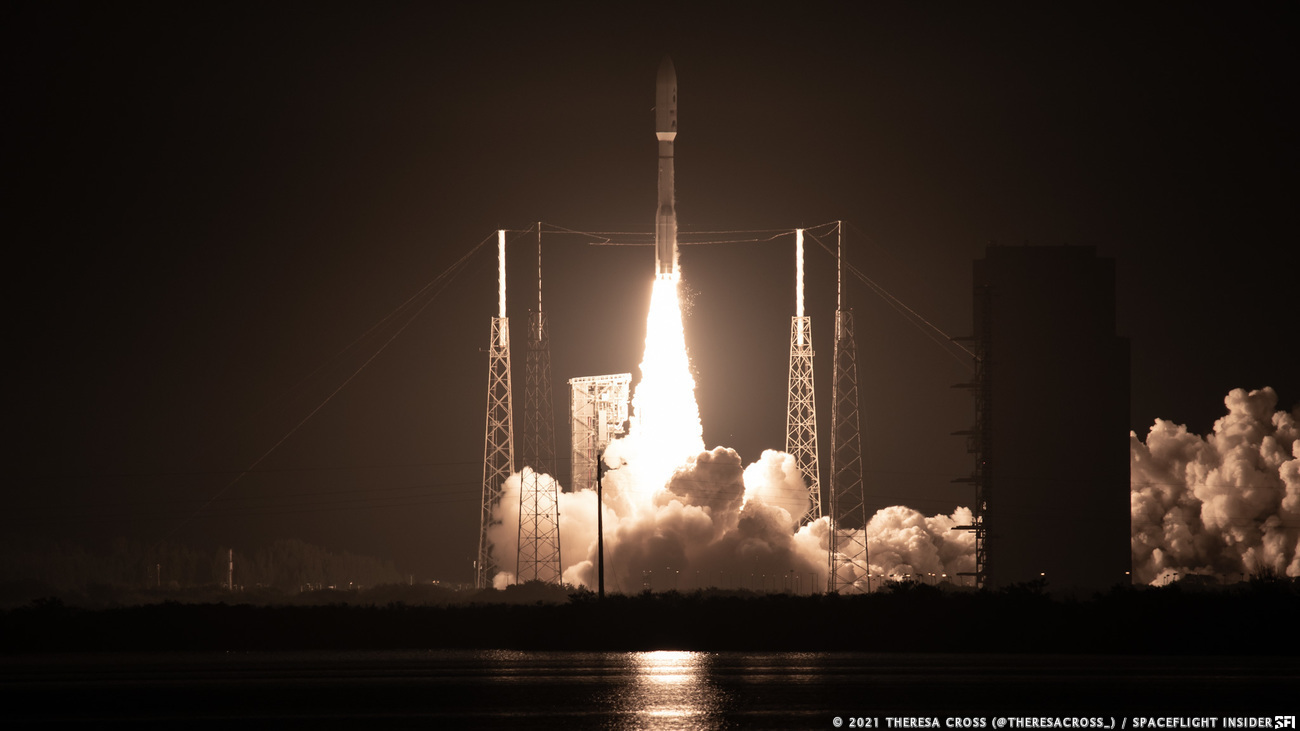 A United Launch Alliance Atlas V 551 rocket took to the skies from Florida to launch the STP-3 mission for the U.S. Space Force’s Space Systems Command.

Liftoff took place at 5:19 a.m. EST (09:04 UTC) Dec. 7, 2021, from Space Launch Complex 41 at Cape Canaveral Space Force Station in Florida. Launch was postponed from Nov. 9 due to a spacecraft processing issue and from Dec. 5 because of a kerosene leak in ground storage equipment. 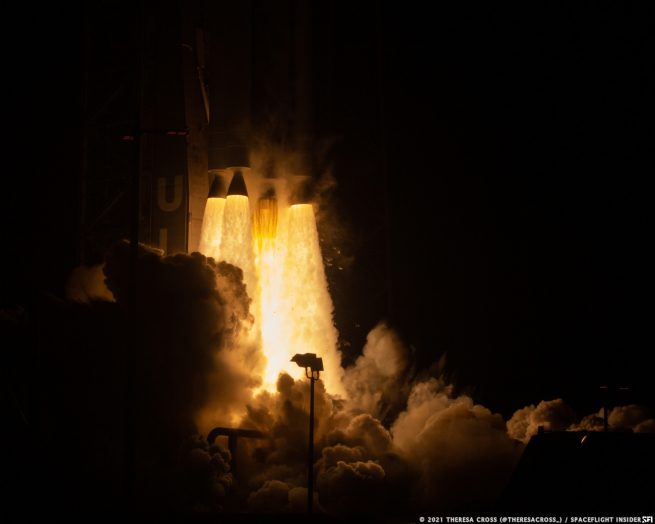 A close up view of the Atlas V 551 lifting off the pad. Credit: Theresa Cross / Spaceflight Insider

Even for today’s launch, it was pushed into its 2-hour-long window by about 83 minutes because of high upper-level winds.

The co-manifested STP-3, or Space Test Program-3, mission combines up-to-date technology and aims to reduce risk for the Department of the Air Force and the U.S. Space Force in the area of nuclear detonation detection, thus advancing their warfare capabilities along with space domain awareness, weather systems and updated communications.

According to ULA, the primary payload is the STP Satellite (STPSat)-6 spacecraft and the rideshare spacecraft called the Long Duration Propulsive Evolved Expendable Launch Vehicle (EELV) Secondary Payload Adapter, or LDPE-1. Both are destined for geosynchronous orbit.

This mission also is the inaugural flight of three new engineering products flying to gather technology ahead of their use on Vulcan Centaur: the Out-Of-Autoclave payload fairing, and in-flight power system and a beefed-up GPS navigation system. 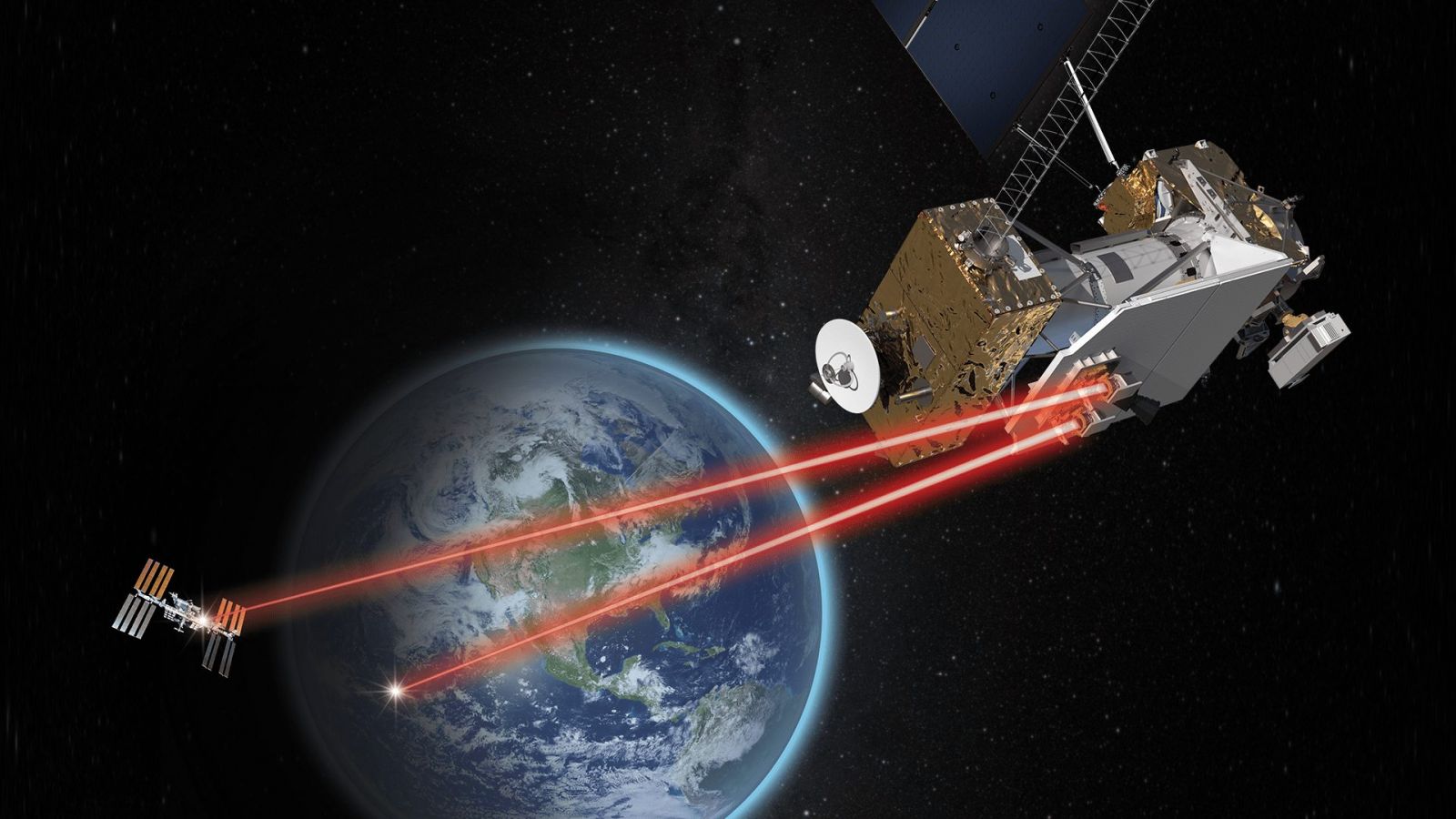 An illustration of the LCRD payload transmitting information from the International Space Station to ground stations by way of a laser communications relay. Credit: NASA

The new In-Flight Power System, IFPS, that supplies power to the satellites’ batteries needed to assist the rocket’s long duration ascent, as they provide power to the payloads, more than seven hours, ensuring the spacecraft has fully-charged batteries when deployed into geosynchronous orbit, achieving the accurate orbit for the payload.

“The IFPS is needed for the spacecraft to have a positive power budget post-separation to successfully begin their mission. This extends the amount of time they have post-separation to deploy their solar arrays and overcome any issues that should arise,” said ULA’s Shawn Pace, one of the lead designers of IFPS.

ULA has never provided in-flight power to a spacecraft before this mission.

This will be the longest-ever ascent for the Atlas V rocket flying some 20,000 miles above Earth to release it’s payload. Both satellites switched from ground power to battery power before lift-off and are relied solely on charged batteries until they were under their own power generating solar arrays, which unfurled after separation from the Atlas V.

The payload was inserted directly into geosynchronous orbit several hours later. The STPSat-6 is was deployed around 6 hours, 30 minutes after liftoff, while LDPE-1 separated from the upper stage some 7 hours, 10 minutes after leaving Florida — about 11:49 a.m. EST (16:49 UTC) and 12:29 p.m. EST (17:29 UTC), respectively.