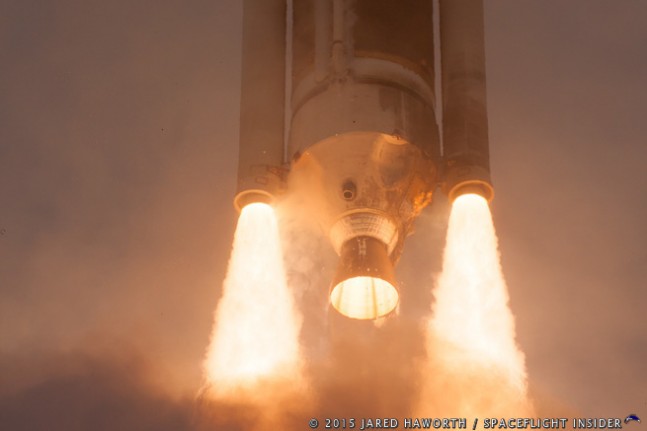 The rocket responsible for carrying this payload into orbit is a variant of the Delta IV Medium – which is capable of flying in five different configurations to suit different missions and payloads. The smallest, Delta IV Medium, has only been used in three missions, has no solid rocket boosters, has a modified Delta III second stage with 4-meter liquid hydrogen and liquid oxygen tanks, and also a 4-meter payload fairing. Next is the Delta IV Medium+ (4,2) – used in this mission – and is similar to the Medium, but with two solid rocket motors attached to the CBC. In this configuration, the first stage has undergone modifications to provide the room needed for the GEM-60 solid rocket motors.

An Aerojet Rocketdyne RS-68 engine powers the Delta IV  first stage, known as the Common Booster Core (CBC). The RS-68 was designed specifically for the Delta IV. Producing 2.95 meganewtons (301,000 kgf) of thrust at sea-level, the RS-68 burns cryogenic propellant (Hydrogen oxidized by liquid oxygen). The Delta Cryogenic Second Stage (DCSS) sits on top of the CBC and is powered by an RL10B-2 engine. During liftoff, the two solid rocket motors augment thrust of the first stage.

Approximately 5 seconds before liftoff, the RS-68 engine fired up, with the two solid rocket motors igniting as the countdown clock reached zero. Around 8 seconds into the flight, the rocket began a series of pitch and yaw maneuvers necessary to attain the trajectory needed for orbital ascension. The Delta IV broke the sound barrier after 47.5 seconds after liftoff; 13.2 seconds later, it passed through the area of maximum pressure, known as “max Q”. A close-up of one of the Delta’s solid rocket motors. Photo Credit: Jared Haworth

The GPS Block IIF, or “GPS IIF”, satellites are described as an interim class of satellites that provide navigational services. This series of spacecraft will be utilized to keep the Navstar Global Positioning System up and running until the GPS Block IIIA fleet can be brought online. The GPS IIF constellation works similar to earlier models, orbiting in a semi-synchronous medium-Earth-orbit. Essentially, GPS IIF-9 will orbit the Earth at a period of about 12 hours – or twice a day.

These satellites are being fielded so as to replace 11 GPS Block IIA spacecraft which were launched between 1990 and 1997. These were designed to have an operational life of some 7 ½ years.

Unlike earlier Block II GPS satellites, the GPS IIF  fleet do not have apogee motors. Whereas the IIA fleet was launched atop the less-powerful Delta II booster, these satellites are being sent to orbit atop the Atlas V and more-powerful Delta IV family of rockets. The Delta IV in particular is capable of ferrying the satellite – directly to its operational orbit.

The contract for the Block IIF satellites was signed in 1996 – and was for a total of 33 spacecraft. Delays and technical issues reduced that number to 12 spacecraft with the first launch slipping from 2006 to 2010. These satellites broadcast L5 navigational signal which was demonstrated on the GPS IIR-20(M) satellite. They broadcast on the new M-code signal and are described being able to double their predicted accuracy. They are also promoted as being better able to resist jamming. Each satellite is equipped with reprogrammable processors which allow the spacecraft to receive software uploads.

The IIF satellites are viewed as being vital for the GPS constellation and the continuation of GPS services over the next 15 years as outdated satellites are replaced with newer, more capable versions.

Each satellite provides navigation data via Earth and Sun sensors and use reaction wheels for attitude control. They have a 16 Hydrazine thruster propulsion system perfect for any orbit adjustments. Thermal control is regulated with blankets, thermal coatings, radiators, and electric heaters. The vehicle launches with 145 kilograms of propellant and twelve 4.5-Newton and four 22.2-Newton Rocket Engine Assemblies.

It was again an honor watchin another successful Delta IV liftoff, to bad the fog bank messed up the viewing of initial liftoff. Was there for the GPS IIF8 Launch last year as well. Astro Gingersnap, love your commentaries. And hopefully one day to work with you fine peo0le at Space Flight Insider……

March 25, 2015
Way to go ULA. Looks to me that Boeing and Lockheed-Martin
have learned plenty from their visits at Dreamland.