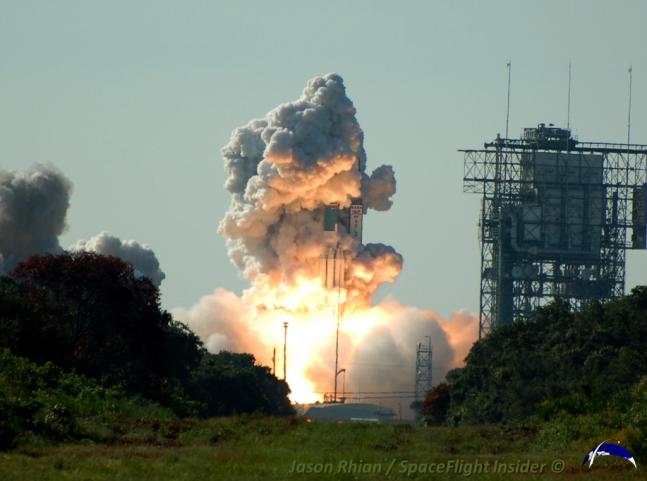 The Delta II launch vehicle, currently in use by ULA, has been in service for more than 25 years. Photo Credit: Jason Rhian / SpaceFlight Insider

On Friday, Feb. 14, 2014 United Launch Alliance (ULA) commemorated the 25th  anniversary of the Delta II launch vehicle.  A quarter century earlier, on February 14, 1989, a Delta II lifted off from Cape Canaveral Air Force Station, carrying the GPS BII-01 satellite to orbit. While it was designed specifically to accommodate the Block II series of GPS satellites, it has proven in the interceding decades to be extremely capable for a wide range  of military, scientific and commercial missions.

“We could not be more pleased to take time today to reflect on the tremendous success of the Delta II program and the nearly 150 missions it successfully delivered to orbit,” said Michael Gass, ULA president and CEO. “While we count success one mission at a time, the ULA and prior Boeing heritage team have been able to count on the Delta II’s success 97 times in a row over the last decade. This is a tribute to our dedicated ULA employees, our supplier teammates and our customers who ensure mission success is the focus of each and every launch.” The ULA Delta II has also been used in the launches of nearly 50 Global Positioning System (GPS) satellites and several other military payloads for the United States Air Force as well as many commercial launches.

The Delta II has also provided rideshare opportunities to numerous “secondary” payloads from universities and international organizations. To date, the Delta II has launched more than 220 separate spacecraft.

The Delta II can be configured into either a two or three stage rocket depending on mission requirements. The second stage is usually used for delivering payloads into low-Earth-orbit and the third stage is required for launching satellites into geosynchronous transfer orbit (GTO). For additional thrust during liftoff, the first stage can be configured with three, four or nine strap-on graphite epoxy motors (GEMS). When three or four GEMS are used all are ignited at launch but when nine GEMs are used six are ignited at launch and the remaining three are ignited in flight.

ULA is scheduled to launch two Earth observation satellites for NASA with Delta II rockets, the Orbiting Carbon Observatory 2 (OCO-2) mission in July and the Soil Moisture Active Passive (SMAP) mission in November. Both missions will launch from Vandenberg Air Force Base in California. Two other NASA missions using the Delta II will be launched in 2016, the Joint Polar Satellite System-1 (JPSS) and the Ice, Cloud, and land Elevation Satellite-2 (ICESat-2).

“ULA is in the final stages of manufacturing the Delta II rockets at our factory in Decatur, Ala., for this year’s NASA missions,” said Gass. “We look forward to working with NASA for these two missions and the future Delta II launch campaigns.”

After the two 2016 launches, there are no further planned missions for the Delta II. Space Launch Complex 17 in Florida has already seen the process of being decommissioned and dismantled.