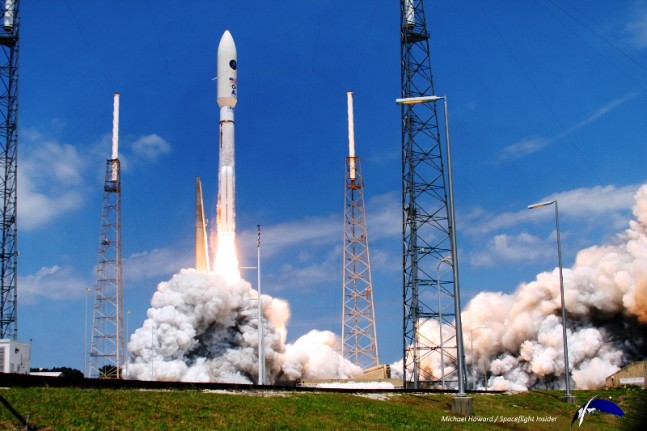 SpaceX, who had challenged the original alliance of Boeing and Lockheed Martin for potential antitrust violations back in 2005, announced its lawsuit against the U.S. Air Force on Friday, April 25, during a National Press Club meeting. The company formally filed the complaint on Monday, April 28.

On April 30, Judge Susan G. Braden of the U.S. Court of Federal Claims issued an injunction preventing ULA from procuring the 36 Russian-made RD-180 rocket engines which ULA uses on the Atlas V family of launch vehicles. The injunction speaks less to the complaints about the lack of competition and is instead rooted in ULA’s alleged violation of recent U.S. government sanctions against Russia.

SpaceX founder and CEO Elon Musk had criticized the use of Russian rocket engines, given that Russia “is in the process of invading Ukraine.” Specifically, the engines are manufactured by NPO Energomash, a corporation owned and controlled by the Russian government.

The injunction states that “Dmitry Rogozin, the Deputy Prime Minister of Russia, is the head of the Russian defense industry and, in particular, the Russian space program,” and goes on to note that Rogozin is on the United States’ Specially Designated Nationals and Blocked Persons List. That is, as long as Rogozin is under U.S. sanctions and in charge of the Russian space program, it therefore will remain illegal for ULA to purchase the RD-180 engines. SpaceX had made steady progress in flying the company’s launch vehicle on a variety of missions. Photo Credit: Carleton Bailey / SpaceFlight Insider

In fact, the injunction prohibits ULA “from making any purchases from or payment of money to NPO Energomash or any entity, whether governmental, corporate or individual, that is
subject to the control of Deputy Prime Minister Rogozin,” until it can be shown that the purchases will in no way violate the executive orders in question.

However, the injunction does not cover existing purchase orders or funds already paid to NPO Energomash. For its part, Colorado-based ULA issued the following statement after the injunction was issued.

“ULA is deeply concerned with this ruling and we will work closely with the Department of Justice to resolve the injunction expeditiously. In the meantime, ULA will continue to demonstrate our commitment to our National Security on the launch pad by assuring the safe delivery of the missions we are honored to support,” said ULA’s General Counsel Kevin G. MacCary. “SpaceX’s attempt to disrupt a national security launch contract so long after the award ignores the potential implications to our National Security and our nation’s ability to put Americans on board the International Space Station. Just like ULA, NASA and numerous other companies lawfully conduct business with the same Russian company, other Russia state-owned industries, and Russian Federation agencies.  This opportunistic action by SpaceX appears to be an attempt to circumvent the requirements imposed on those who seek to meet the challenging launch needs of the nation and to avoid having to follow the rules, regulations and standards expected of a company entrusted to support our nation’s most sensitive missions.”

ULA is currently the sole corporation certified to launch military payloads, but SpaceX has been working toward obtaining the necessary certification for its Falcon 9 rocket. SpaceX believes it met the three-flight requirement with its third launch on January 6, but the U.S. Air Force has only signed off on the first launch so far and is still assessing the other two flights.

SpaceX’s Falcon 9 launch vehicle has launched nine times, eight from Cape Canaveral Air Force Station in Florida and once from Vandenberg Air Force Base in California. This includes five launches of the Hawthorne, California-based firm’s Dragon spacecraft on flights to the International Space Station. In the five years since the Falcon 9 first took to the skies it has been upgraded to the Falcon 9 v1.1, which has stretched fuel tanks, an engine layout that utilizes the newer Merlin 1D and other modifications.

This is the second lawsuit that United Launch Alliance has had to contend with in recent months. In the fall of last year, Orbital Sciences Corporation sued ULA over the RD-180 engine. Orbital has since dropped the suit, but has stated it reserves the right to pick it back up at a later date. One of the core issues raised in the complaint was the block buy of the Russian-made RD-180 rocket engine which powers the first stage of the Atlas V launch vehicle. Photo Credit: Jason Rhian / SpaceFlight Insider