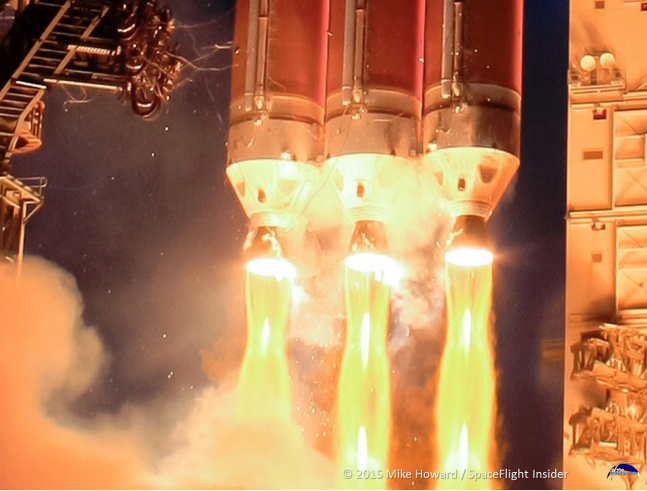 United Launch Alliance is currently working to develop a new launch system which could fly as soon as early as 2019. Photo Credit: Mike Howard / SpaceFlight Insider

Over the past 12 years, flights of the United Launch Alliance (ULA ) Delta IV have become a familiar sight at Cape Canaveral Air Force Station. As reported on SpaceFlight Now, after the successful March 25 launch of the GPS IIF-9 satellite, all Delta IVs will now fly using the RS-68 engine to the new RS-68A. The Delta IV family is one of the most powerful and largest liquid oxygen and liquid hydrogen boosters currently in operation. The history and design of the engine that powers the Delta IV has been an integral part of the rocket’s history.

The family of RS-68 engines were first developed in the mid-to-late 1990s by what is now Aerojet Rocketdyne at Rocketdyne Propulsion and Power located in Los Angeles, California. Rocketdyne started developing the RS-68 in response to escalating launch costs incurred by the U.S. Air Force. This engine was specifically designed for use on the Delta IV Evolved Expendable Launch Vehicle (EELV) with an emphasis on cutting costs from previous rocket engine designs.

“The upgrade to the RS-68A configuration engine was completed in 2012 (certified for flight in 2011 and had its first flight in June 2012). The RS-68A engine has been in production now for several years with six already delivered per our existing contract with ULA,” said Aerojet Rocketdyne’s Dan Adamski.

Compared to other rocket engines, the RS-68 engine reduced part count by over 75 percent which contributed to a comparable reduction in the labor hours required to fabricate and assemble the engine. The RS-68 engine has been used to launch an array of national defense and even NASA payloads. Photo Credit: Michael Howard / SpaceFlight Insider

In 2001, the RS-68 was officially certified for use on the Delta IV family of boosters which led to the first flight of the rocket engine in November of 2002.

The RS-68 is designed with two single-shaft turbopumps for liquid oxygen and liquid hydrogen that are parallel to the engine’s gas generator. The design also incorporates a thrust chamber that contains an ablative nozzle with a 21:5 expansion ratio and a combustion chamber that burns the liquid oxygen and hydrogen to produce thrust. Thanks to its design, the RS-68 engine is capable of producing more than 663,000 pounds-force of (2.89 MN) at sea-level. The RS-68A is designed as an improved version of this engine.

Adamski was asked about the current path that ULA was on, one which should see the company field the Next Generation Launch System or “NGLS” launch vehicle, which might see the Delta IV Medium version of the booster retired in 2019.

“The RS-68A provides 39,000 lbf (173.5 kN) of additional thrust and improved combustion efficiency compared to the RS-68, and provides ULA with added flexibility to support future Delta IV manifest opportunities through this decade and into the next, as required. The key words in your question are ‘might end its service in 2019’ which refers to recent media reports that ULA may phase out the medium class version of Delta IV, but the Heavy version is expected to continue to fly for an as-yet undetermined time period. Until a final decision is indeed made, AR remains committed to providing RS-68A engines to support ULA’s manifest needs for the Delta IV rocket,” Adamski said. The RS-68A is capable of producing more than (3.1 MN) of thrust at sea-level. The design transition from the RS-68 to the RS-68A improved combustion efficiency, which allowed for the higher thrust.The RS-68A was first used in 2012 on the flight of a Delta IV Heavy with a classified payload for the National Reconnaissance Office (NROL-15) from Cape Canaveral Air Force Station’s Space Launch Complex 37. Given that this was the Heavy version of the Delta IV, three of the engines were used to carry out this mission.

Even though the original RS-68 engine provided the Delta IV vehicles with a large amount of power at a low cost it will be replaced by the more powerful RS-68A. The RS-68A engines will continue to be used on the Delta IV family of boosters with ULA planning to introduce the RS-68A to all versions of the Delta IV.

ULA’s plans to move away from the Delta IV and Atlas V families of launch vehicles pose a potential opportunity for Aerojet Rocketdyne, one which Adamski noted.

“The Aerojet Rocketdyne L.A.-site facility (where much of the RS-68A engine fabrication is located) is not uniquely set up for one specific rocket engine or product line. Multiple Aerojet Rocketdyne programs share the same facility, and thus the machines, personnel, and other resources used for RS-68 will continue to be needed to support those activities,” Adamski said. Hodges is planning a career in public science communications, and will be using her internship with SpaceFlight Insider to get great science and engineering communications experience while she works on completing her studies. In her capacity as a volunteer, Ms. Hodges has not only produced written content for SpaceFlight Insider – but has also served as the co-host for one of our live webcasts.

The RD180 cost 23 million. And yet Delta 4 is supposed to be more expensive than Atlas 5. Even stranger is that ORB/ATK is paying 33 million for their new Antares engines. So the logic is pay more and get less is the way to go.

the SSME was a reusable engine. the rs-68 is use once. how is the rs-68 more cost effective than the ssme? unless you’re compairing STS vs Delta IV?

Reusability does not automatically translate into cost effectiveness. If an SSME/RS-25 costs $40 million to build and can be reused let’s say 40 times, then the manufacturing cost of the engine over these 40 flights is just $1 million/flight. But if it costs more that $13 million to recover, refurbish and recertify each SSME after each flight, then the SSME is less cost effective than the $14 million RS-68 on a per-flight basis. If you factor in the differences in thrust between the two engines (~418,000 lbs for the SSME vs ~739,000 lbs for the RS-68) and the reusable SSME is only more cost effective than one-use RS-68A on a per-flight-per-pound-of-thrust basis if the costs to recover, refurbish and recertify are less than about $7 million per engine per flight. That is a pretty tall order for such a complicated piece of technology like the SSME.

What day is today?

Please- address the issue of why the RS-68 or RS-68A were never designed to be Man Rated.

What would it cost or is it even practical to man rate the RS-68/A ? Why is Boeing not going there?

Isn’t the lack of man rating precisely why the RS-25 and leftover SSME’s were put into the SLS chassis ?