Aerojet Rocketdyne could gain from cooling of US-Russia relations 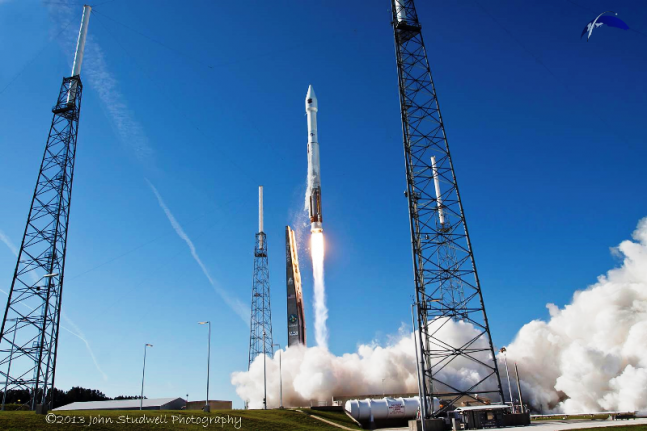 American rocket and missile propulsion manufacturer Aerojet Rocketdyne, with venerable roots in the U.S. space industry, may benefit from the political turmoil over Russia’s intervention in Ukraine. As the US government reevaluates the extent of its involvement with Russia in the light of the crisis in Crimea, the California-based company sees an opportunity to get its new AR-1 liquid-fueled engine installed on several American launch vehicles, including United Launch Alliance’s Atlas V rocket, which currently uses a Russian-made engine, the RD-180.

Aerojet Rocketdyne was formed in 2013 from a marriage of Aerojet, whose history stretches back to the 1930s, and the Rocketdyne division of Pratt & Whitney, another enterprise with pre-Space Age roots. Headquartered in Sacramento, California, its parent company is GenCorp, previously known as General Tire and Rubber Company, a century-old business that first went into partnership with Aerojet, as Aerojet-General, before World War II, to make rocket engines for the US Army.

Rocketdyne, formed by North American Aviation after the War to study captured V2 missiles and develop the V2’s propulsion design, built rocket engines for the Jupiter, Thor, and Atlas missiles before embarking on construction of the main engine for the Saturn I booster first stage, all the main engines for the mighty Saturn V, and, eventually, the Space Shuttle Main Engines.

But with the U.S. retreat from manned spaceflight, following the wind-down of the Shuttle Program, and years of NASA underfunding, the supply of federal money to continue the legacy of great American rocket engine design and manufacture dried up. Newer launch vehicles were powered by engines that were decades old or sourced from abroad.

One potential source of U.S. engine technology is Aerojet Rocketdyne’s AR-1, on which the company has so far invested about $300 million in research and development. The AR-1 engine is described as being capable of delivering 500,000 pounds of thrust, and is expected to cost $25 million a pair, this is the power plant that Aerojet Rocketdyne hopes may eventually be installed on a number of domestic launch vehicles, including SpaceX’s Falcon 9, Orbital Sciences Corp.’s Antares, and, most significantly, as an alternative to the Russian RD-180 on United Launch Alliance’s Atlas V. With the cooling of political relations between the U.S. and Russia, the last of these seems an increasingly attractive option. Aerojet Rocketdyne has been looking into the possibility of resurrecting elements of the venerable F1 rocket engine for use on U.S. space exploration missions as well. Photo Credit: NASA / Aerojet Rocketdyne

The RD-180 evolved from the RD-170/-171 line of engines that powered the Soviet Energia heavy-lift launch vehicle (the rocket that put the Soviet space shuttle Buran into orbit) and is still used in the Russian Zenit rockets. The RD-180 itself was developed for use with the gigantic, ill-fated N-1 rocket intended to blast cosmonauts to the Moon. While almost every other hardware component of the N-1 program was destroyed after the Soviet manned lunar project was abandoned, a large stockpile of RD-180s survived. An agreement between the U.S. and Russian governments, after the fall of Soviet communism, made modified versions of these engines available for use on the Lockheed Martin Atlas III, which first flew in 2000, and its successor, the Atlas V.

Following the chill in diplomatic relations between the U.S. and Russia, both countries are making threatening noises about any future cooperation in space. In May of this year, Russian Deputy Prime Minister Dmitry Rogozin hinted that his nation might prevent U.S. astronauts from using its Soyuz launch vehicles, effectively severing all access to the International Space Station by the country that largely built it. He added: “Russia will ban the United States from using Russian-made rocket engines for military launches”. The US Department of Defense responded by instructing the Air Force to review use of RD-180’s on the Atlas V.

If a decision is made to replace the RD-180 then Aerojet Rocketdyne could end up with a windfall in government grants to fast-track the AR-1. That would lead to massive job creation and investment – quite likely at Canoga Park, California, where the Saturn and Shuttle engines of old were assembled.

If Russia does block further shipments of the RD-180, ULA has stated that it has enough of the engines already in its stockpile to last two years; however, Aerojet Rocketdyne has given 2019 as the date for availability of the AR-1. I was unaware the RD-180s were meant for the N-1. I’m pretty sure the engine it used was the single chambered NK-33 engine, which Aerojet bought a stockpile of to convert into the AJ-26 used on Cygnus. My understanding was that the RD-180 was developed specifically for the American Launch market as a derivative of the RD-170, which was in turn descended from the NK-33.