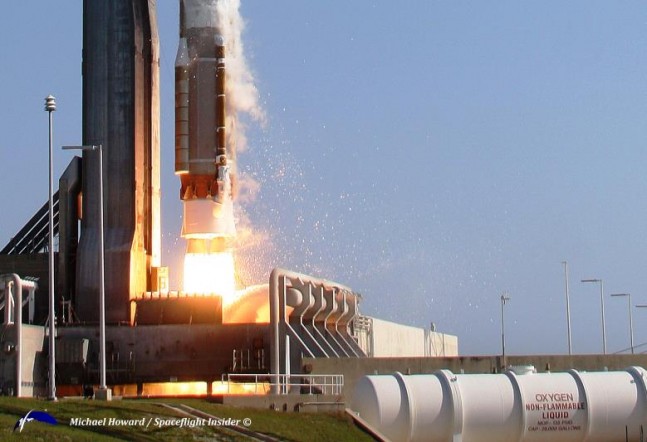 U.S. government officials are continuing to voice their disapproval with Russia’s actions in the Crimea and the eastern border of Ukraine with a new legislative proposal to end the United State’s reliance on Russian-made RD-180 rocket engines. If approved by Congress and signed by President Barack Obama, this provision added to the 2015 National Defense Authorization Act could have a negative impact on United Launch Alliance’s Atlas V  launch vehicle, and create a greater emphasis on developing a replacement for the RD-180. “Mr. Putin’s Russia is giving us some problems,” said Sen. Bill Nelson (D-FL) in the statement released on May 22. “So we put $100 million in the defense bill to develop a state-of-the-art rocket engine to make sure that we have assured access to space for our astronauts as well as our military space payloads.”

Nelson, a longtime advocate for NASA as well as an astronaut, took part in the Senate Armed Services Committee that addressed this concern over the use of Russian-made rocket engines used to launch U.S. national security satellites into orbit. A new move by Washington lawmakers and military officials now looks to begin a transition away from RD-180 engines and work towards finding an U.S.-made replacement.

Amid escalating political tensions over the last few months came a statement by Russian deputy prime minister of space and defense, Dmitry Rogozin, claiming that Russia will no longer sell RD-180 engines to the U.S. Along with other threats that Russia has plans to end its program launching U.S. astronauts to the International Space Station (ISS) by 2020 and not allowing GPS stations within Russia. These statements only exacerbated the inflamed situation between the two nations and their future cooperation in space. There have also been recent legal actions hindering the use of RD-180s that resulted from a temporary restriction on engine purchases because of a lawsuit filed by Space Exploration Technologies (SpaceX) against the U.S. Air Force over a non-bid contract awarded to ULA for military payload launches for the Air Force. ULA’s $11 billion deal with the Air Force consists of 28 launches of navigation and intelligence satellites over the next five years, 20 of which are planned to be taken into orbit atop Atlas V rockets powered by RD-180 engines.

Moreover accusation have recently been made by SpaceX founder and CEO Elon Musk over alleged backroom dealing involving ULA and Air Force officials resulting in contracts awarded to ULA. ULA’s reliance of RD-180 engines became a factor used by SpaceX to cast doubt on ULA to be reliable for launching military payloads over the coming years if their supply of RD-180s can’t be secure. President and CEO of ULA, Michael Gass, addressed the concerns over the reliability of U.S. government  launches in the near future at a Senate hearing on the National Security Space Launch Program last month by stating ULA currently has more than two years of safety stock in RD-180 engines available and has other products that can handle the national security launches that are contracted if needed.

Committees looking at the issue in Washington D.C. have already passed legislation and allocated funds to begin the development of a suitable replacement for the RD-180 engine. It is hoped that this new engine will be ready to be built in the U.S. by 2019. Estimates by industry professionals range around $1 billion for the development and manufacturing of this new engine with only basic concepts currently being disclosed, including this new liquid-fueled rocket be comparable in power to the RD-180 which generates 860,000 pounds of thrust at sea level.