A Delta IV Heavy rocket, the largest variant in the United Launch Alliance Delta IV family, was photographed from Space Launch Complex (SLC) 34 carrying NASA’s Orion capsule skyward during NASA’s 2014 EFT-1 mission. A similar Delta IV Heavy, equipped with the top-secret NROL-44 payload, is on the pad at SLC 37B and is scheduled to fly early in the morning, August 29. Photo Credit: Sean Costello / SpaceFlight Insider 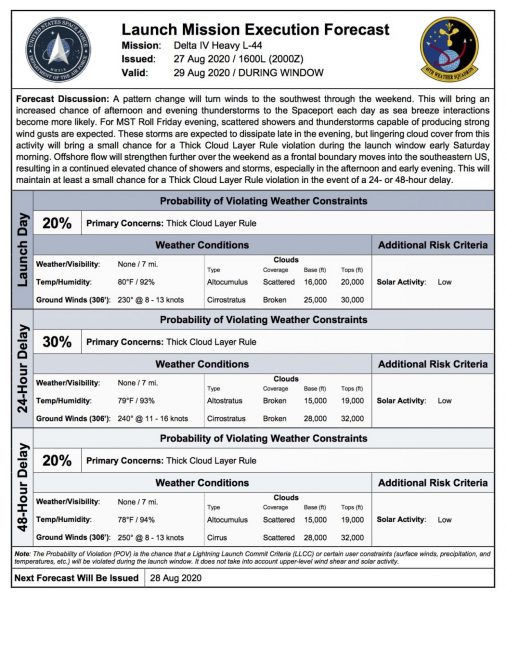 Noting that additional time is needed for their team to validate the appropriate path forward with the ground pneumatics control system, ULA updated the launch time, which will take place from Space Launch Complex 37B at Cape Canaveral Air Force Station.

Of note, “For MST Roll Friday evening, scattered showers and thunderstorms capable of producing strong wind gusts are expected. These storms are expected to dissipate late in the evening, but lingering cloud cover from this activity will bring a small chance for a Thick Cloud Layer Rule violation during the launch window early Saturday morning”.

Is this a variant that has no SRB’s.

Correct, there are no SRBs on the Delta IV Heavy.