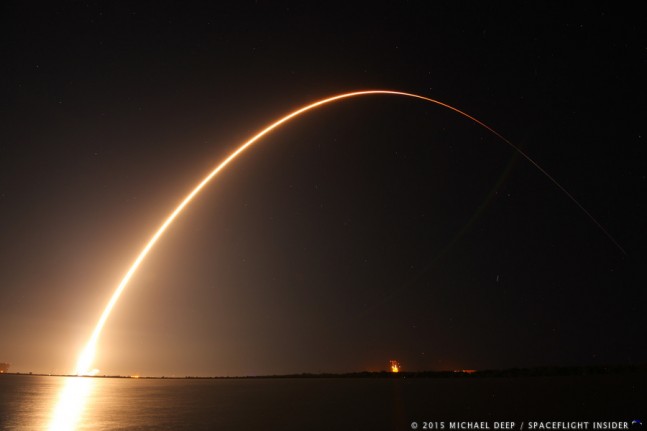 NASA’s Magnetospheric Multiscale (MMS) satellites are ready to begin their science mission after a successful 10:44 p.m. EDT (02:44 GMT) launch from Space Launch Complex 41 (SLC-41). A United Launch Alliance (ULA) Atlas V rocket lit up the night sky as the satellites soared into orbit, becoming the first space mission dedicated to studying a natural phenomenon called magnetic reconnection. This puzzling process is predicted to be the driving force behind many of the most powerful explosions throughout the Universe. The spacecraft were nestled within the payload fairing like a stack of lifesavers, and were deployed one by one at five minute intervals after reaching orbit. The first deployed at 12:16 a.m. (4:16 GMT), with the final separation at 12:31 a.m. EDT (04:31 GMT). Nine minutes later, at 12:40 a.m. EDT (04:40 GMT), NASA scientists received confirmation that all four spacecraft were healthy and ready to begin their mission.

“I am speaking for the entire MMS team when I say we’re thrilled to see all four of our spacecraft have deployed and data indicates we have a healthy fleet,” said Craig Tooley, project manager at NASA’s Goddard Space Flight Center in Greenbelt, Maryland.

Over the course of several weeks, the spacecraft instruments will be tested, and the booms and antennas will be deployed. Following testing, the satellites will be maneuvered into the tetrahedral formation needed to collect our first 3D view of magnetic reconnections. The first science observations are expected to begin in September.

“After a decade of planning and engineering, the science team is ready to go to work,” said Jim Burch, principal investigator for the MMS instrument suite science team at the Southwest Research Institute in San Antonio (SwRI). “We’ve never had this type of opportunity to study this fundamental process in such detail.” The Atlas V lit up the night sky as it lifted off the pad at SLC-41. Photo Credit: Mike Deep/Spaceflight Insider

The explosions often send particles racing through space at nearly the speed of light. Over the course of this mission, scientists hope to get a better understanding of these explosions, which can cripple important systems here on Earth, and the magnetic reconnections responsible for them.

The Earth’s magnetosphere is the perfect setting to study these reconnections, and can help scientists understand how these processes work in other parts of the Universe as well, such as in the atmosphere of the Sun, the area surrounding black holes and neutron stars, and also at the boundary of the Solar System – an area known as the heliopause. The spacecraft will fly in a tight formation through regions of reconnection activity. Using sensors designed to measure the space environment at rates 100 times faster than any previous mission.

“MMS is a crucial next step in advancing the science of magnetic reconnection – and no mission has ever observed this fundamental process with such detail,” said Jeff Newmark, interim director for NASA’s Heliophysics Division at the agency’s Headquarters in Washington. “The depth and detail of our knowledge is going to grow by leaps and bounds, in ways that no one can yet predict.”

Each octagonal observatory carries 11 identical scientific instruments with 25 separate sensors. The instruments are divided into three separate suites, each with their own function: the Hot Plasma Suite, Energetic Particles Detector Suite, and the Fields Suite.

During a reconnection event, the magnetic fields change, sending charged particles or plasma off into space like a rush of wind. The Hot Plasma Suite of instruments will directly measure the plasma to determine what is going on during these reconnections, and is composed of the Fast Plasma Investigation and the Hot Plasma Composition Analyzer.

Just as the name indicates, the Fast Plasma Investigation observes fast moving plasma. Incoming particles will pass through a filter, which selects certain particle speed and direction, allowing them to pass through to a sensor plate. As the particles hit the plate, they produce millions of electrons on the other side, allowing the sensor to detect the “event”. By filtering for specific energies, the FPI can count the specific number of particles entering the instrument at different energies at any given time. Currently Atlas V’s only launch robotic payloads, but that will not always be the case. SLC-41 is expected to see humans launch in a Boeing CST-100 spacecraft in 2017. Photo Credit: Mike Howard/Spaceflight Insider

The Hot Plasma Composition Analyzer (HPCA) contains a mass spectrometer that will determine exactly when particles are present. This instrument collects more detailed measurements than FPI, but at a slower rate. Whenever the carbon foil at the front of the sensor is struck by an ion, it knocks off an electron which then activates a timer. By measuring the time it takes the original particle to hit the stop detector, scientists can determine its speed, which can then determine the mass and ultimately the type of particle present.

Material in Earth’s magnetosphere is dominated by different atoms than what comes in from the Sun as part of the solar wind. By observing what particles are present during magnetic reconnection helps scientists determine what type of plasma was involved and predict what effects the different particles will have. The HPCA uses radio frequency resonance to block out a large part of the solar wind, and in doing so allows for more accurate measurements of the particles within the magnetosphere. Artist concept of MMS, a mission to study how magnetic fields release energy in a process known as magnetic reconnection.
Image Credit: NASA

Magnetic reconnection causes a bulk flow of plasma and can accelerate small groups of particles to very high speeds and energies. The acceleration process remains a mystery. The Energetic Particle Detector Suite (EPD) will help scientists determine if the acceleration process only applies to electrons, or works for ions as well. Short-term bursts of fast ions have been detected within the “magnetotail”, or magnetic tail behind the Earth and another area of possible magnetic reconnections.

The EPD consists of the Fly’s Eye Energetic Particle Sensor (FEEPS) and the Energetic Ion Spectrometer (EIS). Thanks to its solid state detectors, EPD will produce an image of the particles built up on either side of the spacecraft. FEEPS will provide data to determine how many electrons of varying energy levels are present. Each spacecraft is fitted with two FEEPS instruments, giving them 18 views in different directions, at the same time, just like a “fly’s eye”. EIS will be able to measure both velocity and total energy of energetic ions. From these measurements, the mass of the particles can be determined and will tell scientists how many protons, helium ions, and oxygen ions are present.

At the heart of magnetic reconnection is the fact that magnetic fields change their configurations, this is where the Fields Suite comes into play. The instruments in this suite observe the magnetic fields themselves, looking for key signatures of electric fields, which can change during the reconnection process.

MMS will measure electric fields simultaneously in all three dimensions and with better precision than any other instrument. MMS will be flying through reconnection events in well under a second, the Fields Suite is capable of gathering data over 1000 times per second, making it the highest resolution instrument on the spacecraft.

NASA’s Launch Services Program is responsible for determining the best launch vehicle based on the payload requirements. For this launch, a ULA Atlas V, flown in the 421 configuration, was selected. This version of the Atlas V consists of a common core booster first stage with a 4-meter payload fairing and two strap-on solid rocket motors. Atop the common core booster is a single Centaur upper stage.

The rocket’s first stage burns RP-1 propellant with a liquid oxygen oxidizer. The stage is powered by an Aerojet Rocketdyne RD-180 engine, with two AJ-60A boosters providing the additional thrust needed in the early stages of flight. A thick layer of clouds covered the surrounding areas, but the skies were clear and starry above the SLC-41 for the Atlas launch. Photo Credit: Mike Seeley/Spaceflight Insider

At 4-minutes and 9-seconds after liftoff, the first stage shut down, and stage separation occurred six seconds later. Ten seconds later, the Centaur upper stage, powered by a RL-1oA-4-2 engine, ignited and started the first of two planned burns designed to maneuver the satellites into their intended orbit.

The first burn lasted just over nine minutes and maneuvered the vehicle and payload into a parking orbit. The payload fairing jettisoned eight seconds into the burn, exposing the satellites to space.

A 5-minute, 41-second burn positioned the spacecraft into the correct orbit for deployment. Fourteen minutes after the end of the second burn, the MMS satellites were deployed one at a time at five minute intervals.

The launch marked the second Atlas V mission of 2015 and the 53rd overall Atlas V launch. MMS was the fifth launch from Cape Canaveral this year, after three SpaceX Falcon 9 rockets and one other Atlas V rocket. The next launch for ULA will be later in the month as a Delta IV rocket lofts the GOS IIF-9 satellite into orbit.