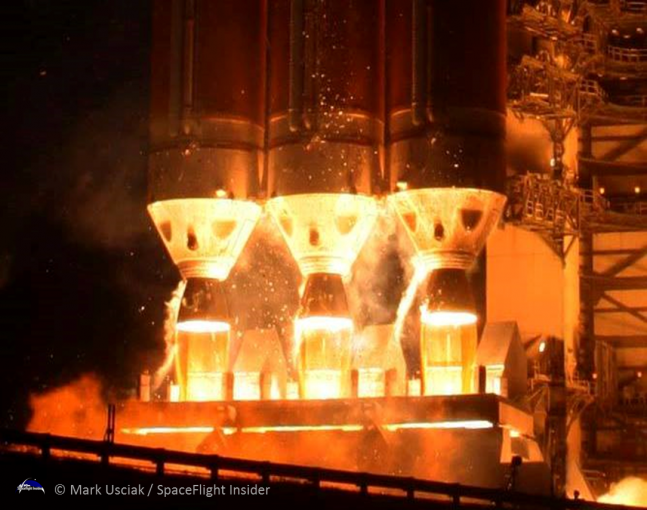 CAPE CANAVERAL, Fla. — It would appear that after the Dec. 2014 first flight of NASA’s new Orion spacecraft, that the space agency liked what it saw. With Orion’s Exploration Flight Test 1, the crew-rated spacecraft took to the skies for the first time. Now, the agency is looking at utilizing the massive Delta IV Heavy booster to send its Solar Probe Plus (SPP) mission to study the Sun’s outer atmosphere.

The DIVH was selected by NASA’s Launch Services Program, who reviewed an array of possible launch service providers – the DIVH came out on top. United Launch Alliance (ULA) was awarded the contract after NASA carried out a competitive procurement process.

“The ULA team is very proud that NASA has selected the Delta IV Heavy launch vehicle for this extraordinary science mission,” said ULA’s Vice President of the company’s Atlas and Delta Programs, Jim Sponnick, in a release issued by the company. “The Delta IV Heavy rocket is uniquely qualified to provide the launch service for this vital science mission that will help us understand processes near the surface of the Sun that affect space weather and radiation environments. We look forward to successfully delivering this critical spacecraft to orbit for NASA.” NASA’s Solar Probe Plus mission is currently scheduled to launch in the Summer of 2018. Image Credit: NASA

If everything proceeds according to schedule, NASA plans to launch Solar Probe Plus in July of 2018. The spacecraft will “sample” environment near the Sun where it will work to provide a better understanding of our star’s coronal heating, the process that creates solar wind and to answer other questions concerning heliophysics.

Like most missions that take place using the Delta IV booster, the flight will get its start from Cape Canaveral Air Force Station’s Space Launch Complex 37 in Florida (the rocket is also launched from Vandenberg Air Force Station in California).

The Heavy version of the Delta IV is, in many ways, three rockets wrapped into one. With three common booster cores, or “CBCs”, the DIVH is comprised of a central core that will have the SPP perched atop, covered in a payload fairing to prevent damage to the spacecraft through Earth’s turbulent atmosphere. Attached to the outside of this central booster are two more cores which serve, in many ways, as strap-on boosters.

Each of the three cores is powered by an Aerojet Rocketdyne RS-68 engine with a single RL10 in the central CBC’s second stage.

NASA selected the DIVH due to the high energy requirements the mission needs to be placed in the proper orbit. NASA has only used one other Delta IV Heavy prior to the SPP mission, that one carried the space agency’s next crew-rated spacecraft to an altitude of approximately 3,600 miles. Photo Credit: Mike Deep / SpaceFlight Insider

To complete the requirements of the SPP mission, an Orbital ATK third stage engine will also be used. That engine is based on the Star-48 solid rocket motor.

“ULA has considerable successful experience integrating third stages on top of our already capable vehicles,” Sponnick said. “We did something very similar when we launched the New Horizons mission, which will fly by Pluto and its moons later this year. We are proud to have Orbital ATK as our teammate for the development of the third stage for the SPP mission.”

To date, ULA is responsible for successfully deploying some 90 satellites to orbit. These include navigation, weather, NASA and NOAA probes, as well as communications satellites.

In terms of the Delta IV Heavy, last December’s EFT-1 mission was the first time that the launch vehicle had flown something other than a mission for the US Department of Defense or a test flight.

The launch of SPP could mark one of the final flights of the Delta IV Heavy as ULA is planning on fielding the Next Generation Launch System (NGLS) in the following year (2019). NGLS is the rocket that ULA hopes will replace both the Delta IV and Atlas V families of launch vehicles.

However, given the fact that few new boosters launch on time and given a number of missions that both vehicles are currently involved with, it is unlikely that both Atlas and the Delta IV will close out their runs in four years’ time – a fact noted by one expert on the Delta IV.

“It’s inconceivable both launch systems will be out of business by 2019. The original EELV [Evolved Expendable Launch Vehicle] competition was supposed to be one supplier – then DOD realized that if there was a generic issue, there would be no launch capability, so both Boeing and Lockheed Martin were given parts of the contract, this was done to keep two supply lines open,” said former shuttle astronaut and Boeing employee Bob Springer. “Until there is a guaranteed successor, I am fairly certain that both the Atlas V and Delta IV will continue.” Solar Probe Plus in orbit above Earth. Image Credit: NASA

First thing I thought when I read about this: Good lord, that thing is heavy AND needs lots of energy coming out of the throw. Only the second time a third stage has been used on one of these, AND it’s looking at using Venus to slingshot, too.