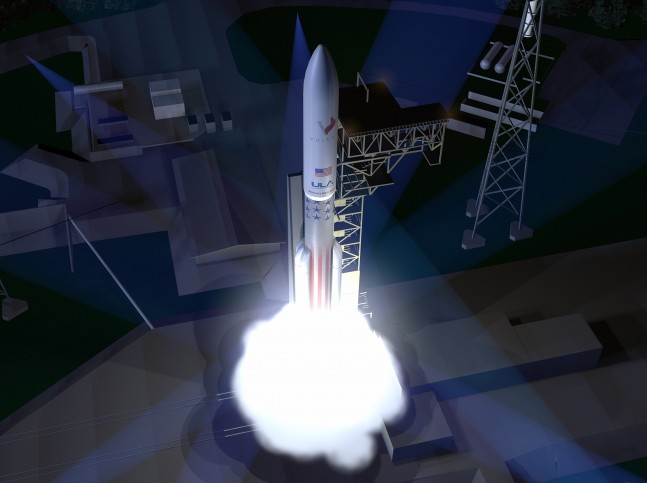 COLORADO SPRINGS, CO — Yesterday afternoon, at the 31st Annual Space Symposium, Tory Bruno, President and CEO of United Launch Alliance (ULA ) made a much anticipated announcement concerning its new launch vehicle. Until today, the new rocket has been known as the Next Generation Launch System (NGLS). However, the vehicle is now known as Vulcan – thanks to an online vote of the American public.

Bruno noted that because ULA is “the company responsible for more than 70 percent of the nation’s space launches, it is only fitting that America got to name the country’s rocket of the future.” Over a million votes were cast in the naming competition. Bruno went on to reveal a few details concerning Vulcan, and stated that the first iteration of the rocket should fly in 2019.

ULA had previously announced a partnership with Blue Origin, a private aerospace company owned by Amazon.com founder Jeff Bezos, to develop a new natural gas fueled engine, known as the BE-4, and it was expected that the Blue Origin engine would be used to power the NGLS. Bruno confirmed that two BE-4’s are ULA’s first choice for Vulcan first stage propulsion, but that Aerojet Rocketdyne is also developing the AR-1 engine, as a backup, in case there are problems with BE-4 development.

Bruno seemed most excited about the company’s plans to incorporate an Integrated Vehicle Fluids (IVF) system into Vulcan. IVF is a system, which will eventually incorporate a small internal combustion engine in the rocket’s second stage that will burn “waste” hydrogen and oxygen and provide electrical power, additional engine burns, attitude control, mid-course corrections, and the capability for in-space refueling to the stage. The system will reduce weight and cost by eliminating the need for helium, hydrazine and large batteries in the second stage.

Perhaps the most interesting revelation, to which Bruno had previously hinted on Twitter, is that the new launch vehicle will eventually incorporate a system of partial reusability, know as Sensible, Modular, Autonomous Return Technology (SMART) Reuse. The SMART Reuse system will consist of a first stage engine compartment which will separate from the booster, following first / second stage separation, and deploy an inflatable hypersonic heat shield that will slow the engine compartment to subsonic speed. A parafoil will then deploy and a helicopter will snare the compartment, mid-air, and transport it to either a barge or to land, allowing for later reintegration and reuse.

Bruno explained that “65 percent of the cost of the first stage is in one thing, the rocket engines,” and that SMART Reuse “will take up to 90 percent of propulsion cost out of the booster.” However, engine recovery and reuse isn’t expected until 2024.

Lastly, the first Vulcan flights will launch with the RL10 powered Centaur second stage which are currently flown on the Atlas V. Later versions will fly, in approximately 2024, with what ULA is calling the Advanced Cryogenic Evolved Stage (ACES). This advanced upper stage will include, among other things, the IVF system mentioned above. Bruno described ACES as “truly a game-changer” in that it allows for “Distributed Lift,” a system that allows for more lift / launch flexibility and the capability to accomplish multiple missions, and reach multiple destinations, with fewer launches.

The first iteration looks an awfully lot like an Atlas V with a new first stage (necessitated by the new LOX/methane engines). I suppose the Vulcan name is supposed to make us think it’s an “all new” vehicle.

I’m glad management has *finally* decided to fund ACES development. I remember reading the paper published in 2009 about ACES. It’s been a long time coming.

One has to wonder if ULA would have done any of this without SpaceX breathing down the back of their necks. (other than change the engines out)

By the time this rocket is ready *AND* certified by USAF (ho ho) Falcon heavy will have a significant number of missions under its belt and SpaceX (we can all bet) will not have slowed the pace of innovation or their inevitable march towards full re-usability.

I do wish ULA success and good luck but his feels a little too late and not enough to beat the monster that is likely to greet them when they spin-up to be ready for launch – SpaceX’s BFR which will be just around the corner.

Still, good luck ULA! Shame you suckled at the pork teat for so long.

Jay, the short answer is “no they wouldn’t”. The reason for that is this thing called “business case”.

It’s a bit like having a delivery van. Runs on diesel, carries stuff. Not the newest or the fastest or the most efficient, but it gets it there 99% of the time. Then there’s this new one. It costs less to run, but you have to spend all this money to get it, and it pretty much does all the stuff the current van does. Your customers are happy with what the current can does, and it’d take 10 years to recoup the cost, so it’s hard to build a justification for spending that money.

Until, that is, another company moves in with newer vans, and customers are finding they like those vans and the shiny more than your van. Then you have a justification, because the lack of that new van is costing you business.

Thanks to venture capital, advance launch payments, other such sources of additional funding, plus the newer, Amazon-ish thinking about profitability, SpaceX isn’t working with anything near the same business justification model. You can do a lot more if your don’t care as much about profiting, or are willing to wait a decade for it.

The whole thing is a complete waste of time and money. The only way ULA has any future is through its political connections. i.e coruption!