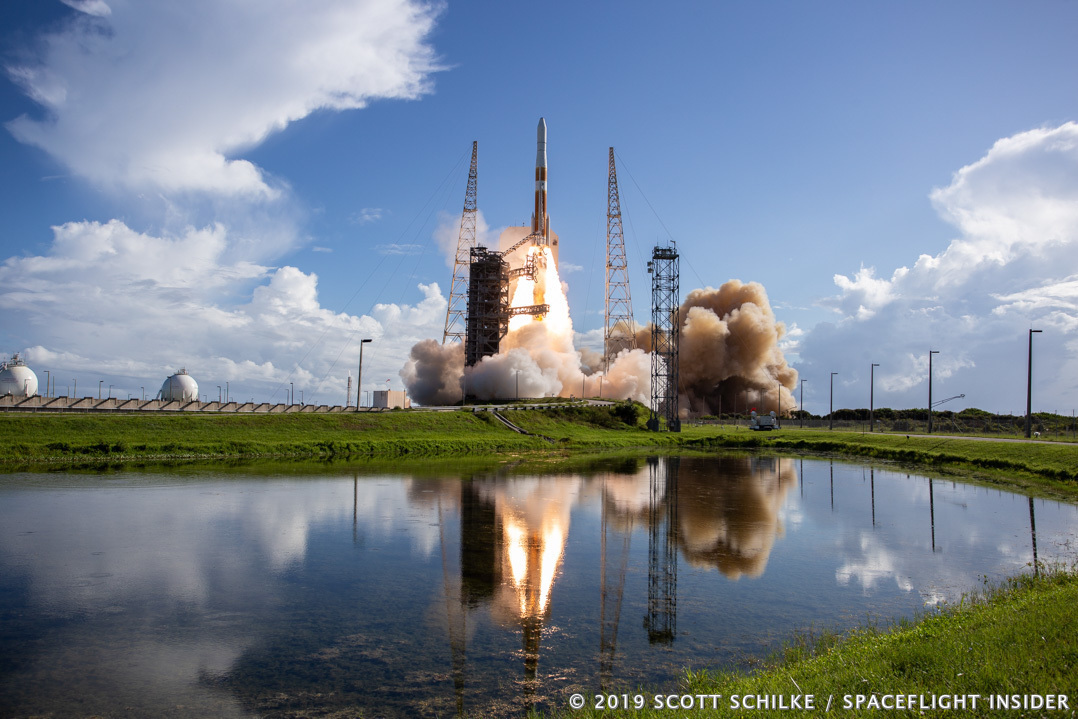 CAPE CANAVERAL, Fla. — Earlier this week, United Launch Alliance’s Delta IV Medium rocket, which made its debut flight in 2002, finished its 17-year, 100% success record by propelling a GPS III satellite into medium Earth orbit. This was a milestone years in the making as the company continues to develop its less-expensive, more-capable Vulcan rocket.

This was the 29th flight for the Delta IV Medium, all but five of which have flown out of Florida. The remainder were from Vandenberg Air Force Base in California.

The mission was named Magellan after the 16th century Portuguese explorer who was the first to circumnavigate the Earth in a single voyage.

This final flight did not come as a surprise. In March 2015, ULA CEO Tory Bruno announced the company would be retiring the Delta IV Medium configurations in 2018 or 2019, while the triple-core Delta IV Heavy configuration would remain in service beyond that time frame.

In fact, only five more Delta IV Heavy rockets are planned through 2023.

The Delta IV and Atlas V rockets are being replaced by the more efficient and technologically advanced Vulcan rocket, which according to latest reports is expected to fly its maiden voyage in 2021. 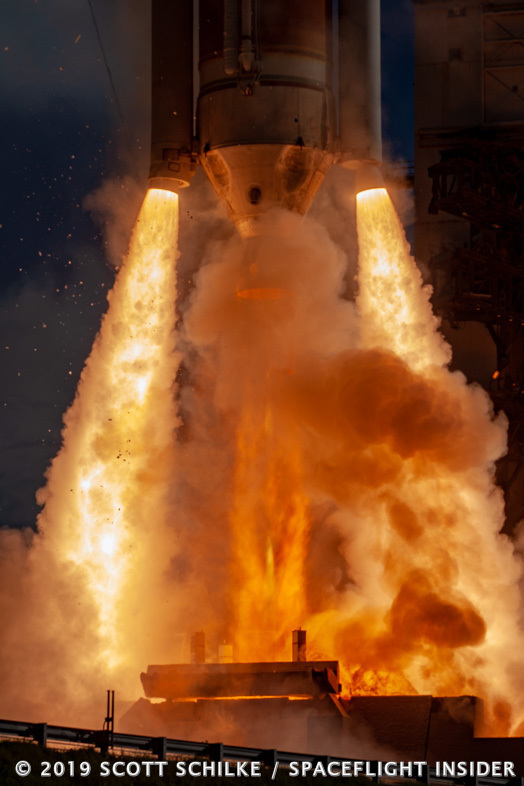 The twin solid rocket motors and single RS-68A engine fire to propel the Delta IV Medium rocket with its GPS III payload off the pad and into space. Photo Credit: Scott Schilke

The GPS III satellite payload was protected during atmospheric ascent by a composite payload fairing.

The mission’s payload was the second of the third-generation GPS satellites for the United States Air Force. The first was launched from Cape Canaveral by SpaceX out of Space Launch Complex 40 in December 2018 on a mission called Vespucci (honoring the Florentine explorer Amerigo Vespucci, after whom the Americas are named). 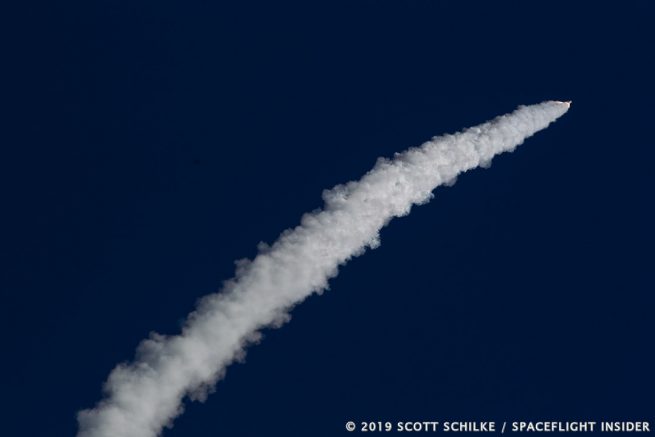 GPS is a technology most people may take for granted, accessing accurate location information from home computers, cars, and even smart phones without a second thought.

This capability is based on a single constellation of 31 satellites owned by the United States government and operated by the U.S. Air Force.

These satellites are in medium Earth orbit about 12,500 miles (20,100 kilometers) above the Earth in six orbital planes at different inclinations. Each spacecraft makes two orbits per day.

For comparison, the International Space Station is only about 250 miles (400 kilometers) in altitude and circles Earth roughly 16 times each day.

First launched in 1978 and fully operational in 1995, the system enables every point on Earth to be visible by at least 4 satellites, permitting accurate location triangulation.

The U.S. Air Force has periodically updated these satellites, and a total of 10 of the third-generation spacecraft have been authorized to be built by Lockheed Martin. 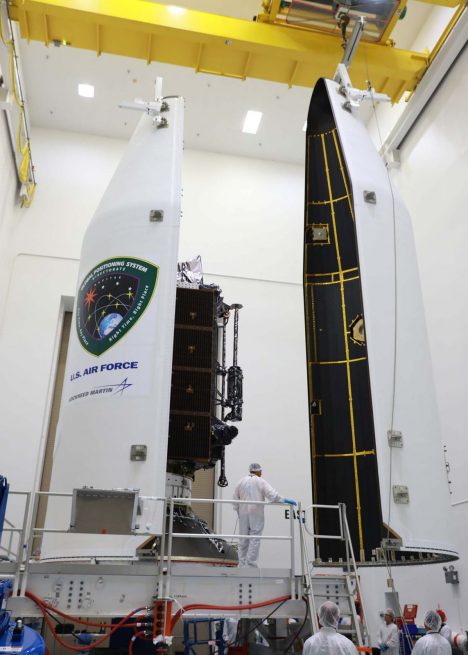 The third of these vehicles is scheduled to be launched by a SpaceX Falcon 9 in January 2020 on a mission named after another explorer — Christopher Columbus.

The remainder of the 10 GPS III satellites are expected to be launched by around 2023. 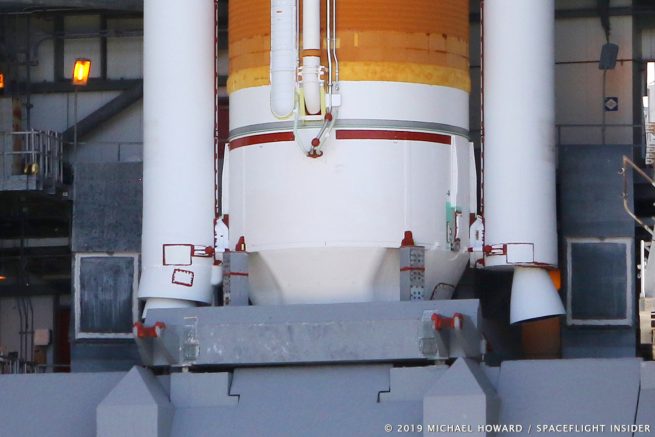 Among those on hand for the launch was Katie Qian, manager of Strategy and Business Development at Northrop Grumman. She said the company has worked with ULA on many of its launch vehicles including the Delta program, providing over a dozen components ranging from composite structures, engine nozzles and GEM-60 solid rocket motors.

“We are very proud of the contribution that we have made on the Delta IV Medium launch vehicle,” Qian said. “This is the last flight and we have built over 86 Gem-60 motors and for over 26 missions for the Delta IV Medium … with 100% mission success.”

Qian said Northrop Grumman’s partnership with ULA will continue as the company builds GEM-63 and GEM-63XL solid rocket motors for the Atlas V and the future Vulcan rocket.

“We are in development with the GEM-63 right now and expect to fly it next year,” Qian said. “Northrop Grumman is developing the GEM-63 XL boosters for the Vulcan. They are a little larger and will provide a lot more thrust.”

Qian said Northrop Grumman has incorporated “a lot of operational efficiencies” to lower the cost of the solid rocket motor and the overall cost of the launch vehicle.