MUOS-3 to get boost from AJ-60A solid rocket motors 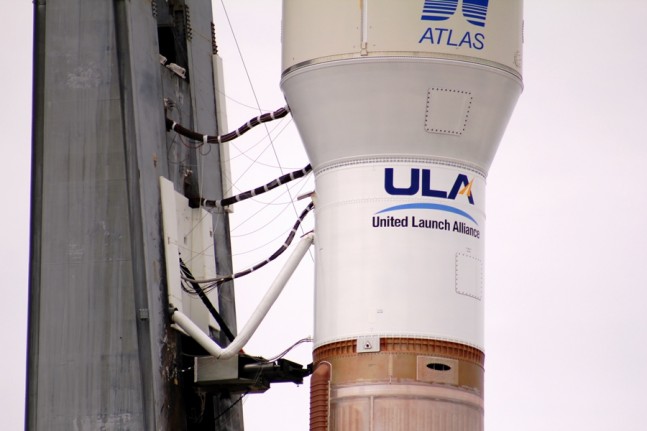 CAPE CANAVERAL, Fla — When the third Mobile User Objective System (MUOS-3) spacecraft takes to the skies in about two days’ time, it will do so with the assistance of five AJ-60A solid rocket motors (SRM). Each of these will be affixed to the first stage of United Launch Alliance’s (ULA) Atlas V 551 launch vehicle’s booster core. The SRMs provide the extra thrust that is required to send the roughly 15,000 lbs (6,803 kg)MUOS-3 satellite out of Earth’s gravitational well – and on its way to orbit.

Developed at the close of the 1990s, the AJ-60A are solid rocket boosters designed for the Atlas V family of launch vehicles. According to the motors’ producer, Aerojet Rocketdyne, these commercially-produced motors are for the Atlas V launch vehicle, which is part of the U.S. government’s Evolve Expendable Launch Vehicle Program (EELV). An Atlas V 541 launches the NROL-67 payload for the National Reconnaissance Office in April of 2014. Photo Credit: ULA

The AJ-60 is a monolithic motor with no segmented joints. This eliminates historical failure modes and provides functional and operational simplicity. The motor also has a fixed canted nozzle and no active trust vector control.

“We received the contract award back in 1999 and in 42 months’ time, we completed the development and qualification of the AJ-60A and had our first flight in July of 2003,” Cova said. “Since then, we have delivered 74 flight-worthy solid rocket boosters and we have flown 60 of those on 20 different missions – with a 100 percent mission success rate.”

As is common on solid rocket boosters of this type, the AJ-60A is described by Aerojet Rocketdyne as a: composite graphite fiber and Aramid-filled EPDM insulation monolithic motor case.

The AJ-60A has no segmented joints, also the engine nozzle itself is fixed at a 3-degree cant. However, should a mission require it, the SRM can be upgraded to a flexseal TVC so that the thrust coming out of the AJ-60A can be directed. Both the throat, as well as the exit cone of the booster are constructed using carbon-phenolic composite materials.

According to information on the company’s website, the fact that the AJ-60A measures 62 inches (157 cm) in diameter and has a total length of some 669 inches (1,699 cm) – makes the SRM the largest monolithic motor that is currently being produced. The launch of MUOS-3 – will be the 61st time that the boosters, produced by Aerojet Rocketdyne, have been used to send a mission to orbit. Photo Credit: ULA

The AJ-60A has been used on an array of missions that include commercial, NASA, USAF and missions for the Department of Defense. A report appearing on Gunter’s Space Page states that between 1 and 6 AJ-60A’s can be employed on ULA’s newly-proposed Next Generation Launch System (NGLS), the planned successor of both the Atlas V and Delta IV family of launch vehicles.

The NGLS would move away from use of the Russian-made RD-180 rocket engine and would instead employ a U.S.-made engine such as the BE-4, manufactured by Blue Origin.

“Aerojet Rocketdyne takes the actions to decrease launch-service prices from ULA and its customers seriously. We are prepared to take significant actions to transform and lay a new foundation that can deliver the best value, next-generation solid rocket booster for ULA’s Next Generation Launch System. We are also driving affordability with continued reliability, committed to being ULA’s sole solid rocket motor supplier,” Cova said.

67 yr old man, feel like I seen everything, now we are back to the future, 60’s with better rockets, better space crafts, hey go for it GOD bless!