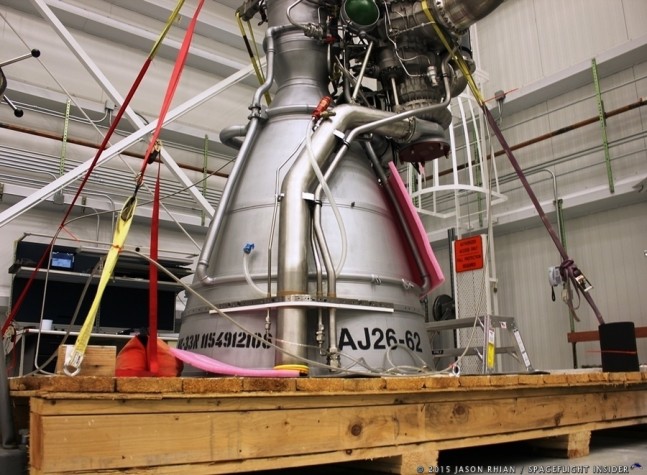 When the Antares booster lifted off on October 28, 2014, under Orbital ATK’s third operational cargo resupply flight to the International Space Station (ISS), it seemed like the concept to fly critical supplies and experiments to the ISS using 40-year-old Russian-built engines had been validated. Twelve seconds later, that perception changed as the rocket and its precious cargo erupted into a massive fireball.

According to reports appearing on NASASpaceFlight, SpaceFlight Now, and elsewhere, it appears that the cause of the disaster was a turbopump in one of the two AJ26 rocket engines in the rocket’s first stage. When the booster’s remains slammed back into Wallops’ Pad 0A, it signaled the start of a possibly significant decline for the company that sells the AJ26 – Aerojet Rocketdyne. One that continues to this day. When Antares takes to the skies in 2016, it will do so with the RD-181 engine powering its first stage. Photo Credit: Jason Rhian / SpaceFlight Insider

Even before the Oct. 2014 accident, the manufacturer of the launch vehicle was making plans to move away from the AJ26 to a different engine – the RD-181 (also produced in Russia). It is possible the AJ26 encountered not one, but two failures on the test stand at NASA’s Stennis Space Center in Mississippi.

In terms of Aerojet Rocketdyne, the AJ26 is not alone in terms of encountering problems. In October of 2012, an Aerojet Rocketdyne RL10B-2 engine – located in the upper stage of a United Launch Alliance (ULA ) Delta IV M+ 4,2 – experienced a fuel leak which caused lower-than expected thrust.

The payload for the mission, the third GPS Block IIF satellite to be sent aloft, was placed into the correct orbit thanks to sufficient fuel margins that allowed for compensation of the leak.

Subsequent investigations delayed not only scheduled Delta IV flights, but also, due to similar systems on the Atlas V, the launch of an Atlas V 501, with the U.S. Air Force’s OTV-1 mission as well.

In May of 2013, it was decided to resume flights of the Delta IV. Upon further investigation, however, this determination was reversed, which saw the launch of the GPS IIF-5 satellite delayed; the mission was launched on Feb. 21, 2014.

United Launch Alliance announced the basic components of its Next Generation Launch System “Vulcan” booster at the 2015 Space Symposium held in Colorado Springs, Colorado, on April 13 of this year. This new rocket’s first stage will use two Blue Origin BE-4 rocket engines in its first stage and an as yet undetermined engine in its second stage. The GEM family of solid rocket boosters is a possible contender for use on Vulcan, along with Aerojet Rocketdyne’s AJ-60A and potentially others. Photo Credit: Jason Rhian / SpaceFlight Insider

As SpaceFlight Insider reported this past January, the AJ-60A solid rocket boosters were initially considered for use on Vulcan. Currently, AJ-60A are used on some versions of the Atlas V family of rockets. These solid rocket motors provide the extra lift required for heavier payloads that are hoisted aloft by Atlas. However, it is not guaranteed that the AJ-60A will be selected, a fact highlighted by ULA’s president.

“There are multiple upper stage engine options being considered. As for the solids, ULA will put out an RFP later this year,” said United Launch Alliance’s President and CEO, Tory Bruno.

While it is possible ULA will select the AJ-60A, or an upgraded version of the solid-fueled booster, other options, such as the GEM-series of SRBs, could also be chosen.

When looked at individually, the loss of any one of these systems is something that the company can likely compensate for. However, given that no fewer than two lines will no longer be used, with two more also possibly losing their chief customer, it is unclear at present how such a scenario will impact Aerojet Rocketdyne. A review of the status of the company’s current offerings is as follows: RL10C: Replacement for the RL10B currently used in second stage of the Delta IV; if not selected for use on Vulcan – to be discontinued between 2019-2023.

RS-25: Used on NASA’s now-retired Space Shuttle, leftover engines will be used on the first flights of the Space Agency’s super Heavy-Lift Space Launch System with an expendable version of the engine, the RS-25E, planned for later flights. SLS is hoped to fly at the rate of about once a year. Currently, the rocket is set to conduct its first flight in 2018, with subsequent flights taking place at the rate of once every 3-4 years.

J-2X: A legacy system from the Apollo era, the J-2X is being developed for use on the Earth Departure Stage for the Block II version of the SLS. Currently, the rocket is set to conduct its first flight in 2018, with subsequent flights taking place at the rate of once every 3-4 years. Decades of bad government policy and a long string of corporate mergers left Aerojet Rocketdyne as the only large rocket engine manufacturer in the country with a fairly limited catalog of expensive products or less expensive (and sometimes less reliable) Russian-built engines. Now, just a little competition from Blue Origins (for engines) and SpaceX (for engines for their relatively inexpensive launch vehicle) is threatening the long term viability of Aerojet Rocketdyne.

It seems that our infrastructure for rocket engine development was in a much worse state than we had imagined. Hopefully the newcomers will succeed otherwise we could find ourselves without any domestic large rocket engine production.

I believe SLS’s Exploration Upper Stage is still baselining 4 RL-10s for propulsion. As far as I know, J-2X is completely mothballed.

There’s also a chance Vulcan might use the AR-1 engine for its first stage, if ULA deems BlueOrigin is not keeping an adequate schedule in the next year or so. RL-10s will continue to be in use on the Centaur upper stage on Vulcan until ACES replaces it in 2022/23. They’re surely fighting hard to be selected over BE-3 and XCOR’s offering.

It’ll be sad to see RS-68 go, is it possible its production lines could be used in manufacturing RS-25E?

These companies aren’t relevant anymore. Now that Space X is on the scene, their con game is over. Let’s face it, spaceflight is basically a bunch of fat guys at a banquet laid on by the tax payer. The only way to compete with Space x is for most of them to leave the table and nobody’s volunteering to do that.