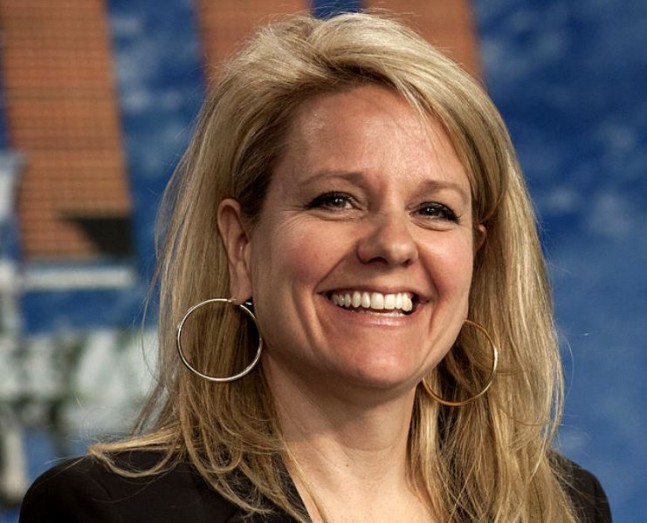 Space Exploration Technologies’ (SpaceX ) President and Chief Operating Officer Gwynne Shotwell discussed her company’s public relations issues in the wake of a recent series of launch scrubs and changes to the company’s webcasting policies. She appeared with John Batchelor and David Livingston on the podcast The John Batchelor Show where she attempted to answer to complaints from the public regarding the decision.

Shotwell responded to issues raised by viewers about the lack of streaming video from the Saturday, June 21 launch attempt of a Falcon-9 v1.1 rocket with six Orbcomm OG2 communications satellites. Livingston asked if SpaceX was changing its streaming policy for live coverage of launches. “You know, I don’t think we’re changing our plan,” Shotwell said. “We were moving away from the webcast format that we had before to get to a kind of a higher-tech feel, and we were just going to transition away. Saturday launch, even though we obviously attempted it, the weather looked like we would not be able to fly on Saturday. And so we thought, of the one day we could take to transition, maybe we could take that time and transition on that Saturday. But, uh, public opinion was pretty strong on that point.”

According to Justin Ray with SpaceFlight Now, a blackout on this scale has not occurred since the Cold War. SpaceX is currently vying for NASA’s Commercial Crew contract and has launched four unmanned Dragon capsules to the International Space Station carrying needed supplies for crew stationed there.

The company has also lobbied and even issued a lawsuit over the Evolved Expendable Launch Vehicle Program – in an effort to be allowed to compete for the nine or so launches conducted annually on behalf of the Department of Defense (DoD). Currently United Launch Alliance is the sole participant under this contract.

“They like the webcast,” Shotwell explained. “They certainly like us to live stream. So I believe on Sunday we were setting up to live stream. Not quite at production level yet, but we were going to do something.”

The cancelled webcast, combined with the media blackout was widely criticized by followers of social media. SpaceX is highly-praised for the level of excitement it engenders in the public about space exploration. However, the blackout caused a backlash from which the company is still trying to recover. Gwynne Shotwell, President and COO of SpaceX, attempted to explain the cancellation of the company’s launch webcast during the July 21 launch attempt of a Falcon 9 rocket. Photo Credit: SpaceX

“It’s always easy to jump to some nefarious plot,” Shotwell said, “when there’s almost always—for any circumstance that looks odd. But in this case it was simply we were moving away from that broadcast—that specific format anyhow. I didn’t think we were going to lift off on Saturday because of the weather. Turns out that if we had ten more minutes of a window we might have been able to lift off. It was that close, and that tight. But we were going to stream live video on Sunday.”

On June 22, SpaceX scrubbed hours before the launch window opened – issuing the following response about that particular scrub:

SpaceX is taking a closer look at a potential issue identified while conducting pre-flight checkouts during yesterday’s countdown.  SpaceX will stand down Tuesday while our engineering teams evaluate further, which will also allow the Range to move forward with previously scheduled maintenance.  We are currently targeting the first week of July and will work with the Range to confirm the next available launch opportunities.

Orbcomm OG2 has had no fewer than 12 launch dates listed over the course of the past 10 months. The company will likely be unable to try again until the middle of July due to routine maintenance at Cape Canaveral Air Force Station’s Eastern Range.

Spaceflight Now contacted SpaceX during the blackout, and spokesperson Emily Shanklin said ““[w]e’ve actually been ready to move away from the webcasts for awhile . . . . It takes a lot of resources but the main reason is these launches are becoming more routine and the full webcast isn’t really appropriate anymore.”

SpaceX has launched nine times in five years. By comparison, United Launch Alliance launches about 12 times annually. ULA carries out scientific launches for NASA, national security flights for the Department of Defense, as well as highly-classified missions for the National Reconnaissance Office and U.S. Air Force – all of ULA’s launches are covered live via webcast.

I am concerned as to why this article was run. It is almost a copy of ones run shortly after the 3 scrubs. It offers no new insight or clarification from SpaceX and seems more likely to be rubbing salt into open wounds.
Of more interest to this same subject is why there has been no tweets of any type by SpaceX or Elon Musk himself except to congratulate Curiosity on Mars. Use of Twitter would be the most expedient way to address SpaceX followers and offer explanation or apologies. I have offered this opinion earlier with no response from anyone. The original blackout was clearly a blunder but failure to at least tweet continues compounding the PR failures.