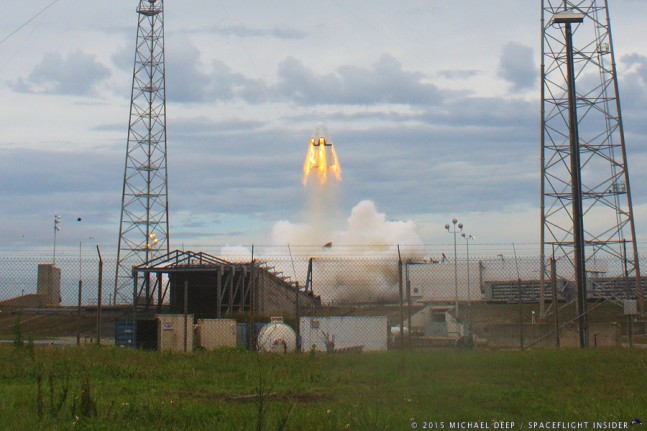 CAPE CANAVERAL, Fla. — On Wednesday, May 6, 2015, SpaceX conducted their first Pad Abort Test with the crewed variant of the Dragon from Space Launch Complex 40 (SLC-40) at Cape Canaveral Air Force Station. Using eight SuperDraco engines firing simultaneously, the test measured various parameters of the new escape system to collect data so that the system can be certified to send crews to the International Space Station (ISS).

The events leading up to today’s test flight were highly dynamic and fluid, with the actual time and the duration of the test’s window changing. Part of this was likely caused by concerns of a tropical depression that was forming in the Atlantic. Initially, the test was set to begin at 7 a.m. EDT (11:00 GMT), but that slipped two hours to 9 a.m. with the launch window varying. The actual test window stretched out some seven hours, but SpaceX did not need it. At the very opening of the launch window, the Dragon breathed fire and was on its way aloft. The trunk section separated from the capsule portion of the test article and then slowly, almost lazily, the parachutes deployed and the Dragon was lowered gently to the ocean below.

The eight SuperDraco engines mounted onto the sides of Dragon are described by SpaceX as being capable of producing 120,000 lbf (533.8 kN) of axial thrust in less than one second. This means that, in the event of an emergency, crews on Dragon would be pulled to safety—328 feet (100 meters) away in just 2 seconds, and about a third of a mile (half a kilometer) in a little more than 5 seconds.

“This is a critical step toward ensuring crew safety for government and commercial endeavors in low-Earth orbit,” said Kathy Lueders, manager of NASA’s Commercial Crew Program. “Congratulations to SpaceX on what appears to have been a successful test on the company’s road toward achieving NASA certification of the Crew Dragon spacecraft for missions to and from the International Space Station.”

Traditional launch escape systems (LAS) are heavy and are always mounted at the top of a capsule. Normally these are powered by solid rocket motors. The design of most of these systems has been around since the early days of human spaceflight. The escape system’s purpose was to prevent loss of crew (LOC) by igniting and pulling the capsule away from the rocket either prior to lifting off or during the early phases of flight. Once the flight had commenced and prior to reaching orbit, the escape system was jettisoned. In all crewed flights that reached orbit, these systems were never used, making the system in this configuration somewhat a waste.

According to Encyclopedia Astronautica, the Soviet Union is the only nation that had to use the launch escape system, which occurred during a Soyuz T-10-1 mission in 1983. The rocket had caught fire prior to launch and the launch escape tower pulled the capsule containing the crew to safety just before the rocket exploded. The launch escape system designed for Dragon is unique because it is powered by eight liquid-fueled SuperDraco engines and actually incorporated into the sides of the capsule itself. By using the same liquid fuel as the smaller Draco engines, which are used for maneuvering in orbit, the system is lighter and can be used all the way to orbit without the need to be jettisoned, making it also reusable. In fact, it is SpaceX’s hope that someday the escape system can be used for double duty as a landing system for the Dragon capsule.

“SpaceX was founded with the goal of carrying people to space, and today’s pad abort test represented an important milestone in that effort,” said Gwynne Shotwell, SpaceX president and chief operating officer. “Our partnership with NASA has been essential for developing Crew Dragon, a spacecraft that we believe will be the safest ever flown. Today’s successful test will provide critical data as we continue toward crewed flights in 2017.”

According to NASA’s Jon Cowart, the agency’s partner manager for their Commercial Crew Program, SpaceX is “pulling the curtain back a bit” and allowing the public to witness this developmental test. Cowart stated that although this test has been a work in progress for four years, no matter how many simulations you run, “One good test is worth one thousand analogies […]. These are the kind of things we [aerospace engineers] live for […]. Now there is going to be smoke and fire, what we love.” Today’s test was one of the first times that all eight of the crew-rated Dragon’s SuperDraco engines have been fired at one time. Photo Credit: Michael Seeley / SpaceFlight Insider

The SuperDraco engines used in the escape system are 3-D printed and were designed and developed only nine months after NASA awarded the CCP contract to SpaceX. Just one of the engines is described as providing 200 times more thrust compared to the Draco engine. They can reach full thrust within approximately 100 milliseconds and can be throttled and restarted.

The largest number of SuperDraco engines that have been fired together at one time before today has been only two. The escape system has eight Super Draco engines and is expected to produce g-loads of about 4–4.5 Gs.

“Dragon went from zero to 100 miles per hour in just 1.2 seconds. That’s pretty zippy,” Musk added. “One of the engines was slightly off mixture ration, but not in any way that impacted the flight.”

Several tests were conducted during this abort test. SpaceX and NASA are looking at vibration, attitude, temperature of the outside of Dragon, acoustics inside the capsule, and guidance and control. There was a dummy on board loaded with sensors measuring the effects of the flight. Though it had been reported that its name was “Buster” by the participants in the press conference last Monday, the dummy does not have a name according to a follow-up release issued by SpaceX, so some have taken to calling it “Anonymous”. There was one group whose work might typically remain anonymous to whom Musk gave a special nod during an impromptu press teleconference held about two hours after the test flight.

“I have to give huge credit to the engineers and technicians that were involved […] it was a great outcome,” Musk said.

As noted, today’s test flight was not just historic, it was also an attempt to develop new systems that have different and varied purposes.

“This is the first time since the Apollo era that an American spacecraft will have a launch abort capability; whereas in the past, there’s been a tractor motor attached to the nose of the capsule and, due to its weight, it is jettisoned a few minutes into the flight. During each mission, you had to jettison this tractor motor or there would have been a guaranteed fatality. Our system does not have this issue and it can be used for a propulsive landing,” Musk said. In this image, Dragon’s trunk section (left) can be seen separating from the capsule portion of the spacecraft (right). Photo Credit: Mike Deep / SpaceFlight Insider

Awesome Job! It looked great and we cannot wait for the inflight test later this year.

Brilliant! So clad it seemed to go well. I was hoping someone could help with some questions I have. The graphic above shows the Dragon reaching 1500 metres yet it only reached just under 1000. And it did appear to reach a lower altitude than the Blue Origin equivalent abort test. So did it in fact fall short of its intended altitude? Also, what is the purpose of the tumble just after trunk separation? A commentator said it was intentional.

1- it is stated in the article that there was a problem with one engine, but it still achieved sufficient altitude for the parachute system to work properly.
2- the craft has to reorient and travel ‘backwards’ in order for the parachute to open and operate without tearing or flipping around too violently and killing the people inside.