What would it be like to ride Dragon? SpaceX video gives first-person perspective 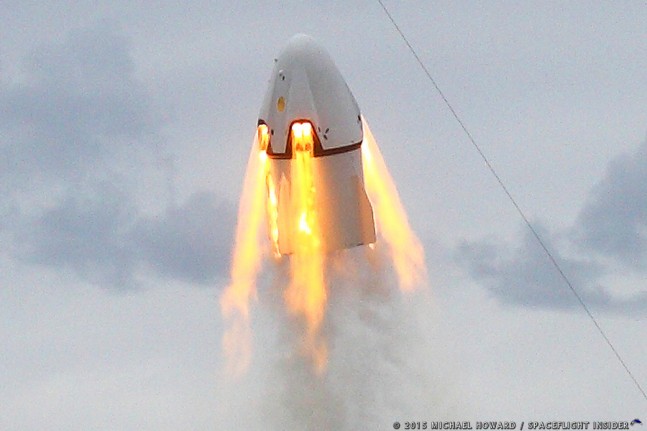 SpaceX has released video of the May 6, 2015, Pad Abort Test of the Dragon spacecraft. Photo Credit: Mike Howard / SpaceFlight Insider

CAPE CANAVERAL, Fla — Space Exploration Technologies (SpaceX ) has released video from the May 6, 2015, Pad Abort Test of the crewed version of the highly-successful Dragon spacecraft. During the roughly two-minute video, one is given a first-hand perspective of what it would have been like to be an astronaut flying on the craft as it conducted this important mission.

Congrats, SpaceX – another step forward in building space systems that don’t get
thrown away during the launch sequence.

This is a very significant advance, second only to the successful booster reentry tests. My remaining concern is the noise levels inside the Dragon, and I can’t find an answer to this. A SuperDraco just the other side of a lightweight wall would make noisy neighbours seem like a trivial problem in comparison. I’m worried that the noise wouldn’t just deafen the crew, but would liquidise them too.

It can’t be no worse than the noise of the SRB’s of NASA’s Space shuttle launch.

Another box checked! SpaceX continues to impress! Can’t wait until they are transporting our astronauts!

Listening to the audio, the noise level actually seems less than I would have expected. If anything, it’d be less than if a ‘tractor’ escape system were used with the rockets directly overhead.

Anyone know why the drako’s lift the cargo section, and not just the crew module? It sheds the cargo before chute deploy… or does the cargo have its own chute’s?

Aerodynamic stability during boost and coasting. Once the cargo section is jettisoned, the capsule naturally wants to flip around because that’s the direction that it is aerodynamically stable (as it has to be for a normal reentry).