What makes a Dragon: A quick guide to SpaceX’s capsule 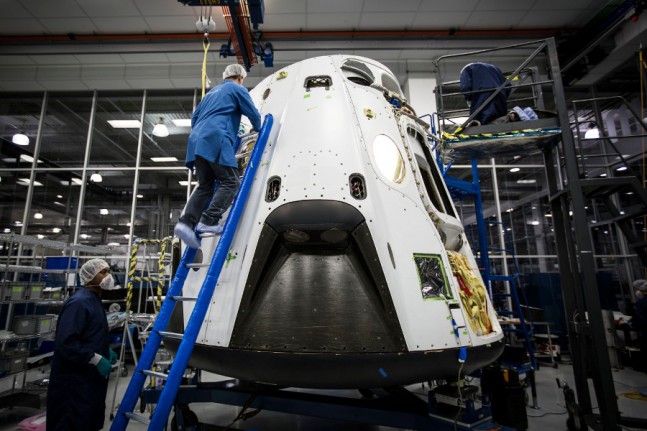 Engineers and technicians prepare the test version of the company's Crew Dragon for a pad abort test at Cape Canaveral, Fla. Photo and Caption Credit: SpaceX

The Dragon spacecraft developed by Space Exploration Technologies (SpaceX ) has proven itself useful as a delivery vehicle for supplies to the International Space Station (ISS), and the sixth such operational mission is currently scheduled for Monday, April 13. A crewed variant of the capsule is now under development and testing to carry astronauts to the orbiting lab. In theory, it could even be altered to retrieve samples from the planet Mars. But what is the difference between its variants, and what makes a Dragon a Dragon?

SpaceX began quietly developing the Dragon capsule in late 2004, according to NBC News, and announced it in early 2006 when they submitted it to NASA for funding. Through the Commercial Orbital Transportation Services (COTS) program, NASA was seeking proposals for a commercial vehicle to resupply the ISS, and in August of 2006 the agency announced that SpaceX was one of two companies chosen. Just over two years later, in December of 2008, NASA awarded SpaceX a $1.6 billion Commercial Resupply Services contract, calling for 12 resupply flights to the ISS. The first Dragon mission, a demo flight, succeeded on December 8, 2010. The second demo launched on May 22, 2012, berthed at the ISS on May 25, and returned to Earth on May 31 of that year. On October 8, 2012, the first operational CRS flight lifted off.

According to SpaceX’s website, “Dragon is the first commercial spacecraft to deliver cargo to the International Space Station and currently the only cargo spacecraft flying capable of returning significant amounts of cargo to Earth.”

Each Dragon capsule uses Draco thrusters, 18 of them, to maneuver in space and upon re-entry. These engines can each produce about 90 pounds-force (400 N) of thrust, and are fueled by the commonly-used dinitrogen tetroxide, an oxidizer, and monomethylhydrazine, a fuel, with which the oxidizer is hypergolic – or spontaneously ignites on contact. After a launch for the ISS, the Dragon is placed in a target orbit, and then uses the Draco engines to reach the space station itself. Hypergolic engines do not require ignition systems, and thus can be reignited reliably many times over, which makes them useful for maneuvering spacecraft in this manner.

To protect the capsule through the extreme temperatures of re-entry when it returns to Earth, each Dragon uses a proprietary version of NASA’s Phenolic Impregnated Carbon Ablator (PICA) heat shield, the PICA-X, which SpaceX developed alongside NASA. According to SpaceX, “It can potentially be used hundreds of times for Earth orbit re-entry with only minor degradation each time […] and can even withstand the much higher heat of a moon or Mars velocity re-entry.”

Each Dragon capsule has a total launch payload mass of 13,228 pounds (6,000 kilograms) with a total launch payload volume of 883 cubic feet (25 cubic meters). On return, its total payload mass is halved at 6,614 pounds (3,000 kilograms) with a volume of 388 cubic feet (11 cubic meters). That’s because the total space is divided between the pressurized section of the spacecraft, or the capsule, which is reusable and returns to Earth; and the trunk, which carries unpressurized cargo and the solar arrays, and which is jettisoned shortly before re-entry into Earth’s atmosphere. The Dragon been used in five CRS missions so far (with the sixth set for Monday of next week), each launched aboard a SpaceX Falcon 9 rocket. Yet it has been developed with several other purposes in mind.

One variant of the Dragon, to be used for uncrewed, non-NASA, non-ISS flights, is the DragonLab, “designed for research and testing in a microgravity environment independent of the International Space Station,” according to SpaceX. So far is has not yet been used, though two missions for it have appeared on the SpaceX manifest – one for 2016 and one for 2018.

The more radical variation of the capsule was introduced in May of 2014 – the Dragon version 2. Since the beginning, the plan for Dragon was to included a human-rated variant, and the Dragon v2 is designed as a manned vessel that can hold up to seven crew members. It is meant to be capable of multiple reuses times before requiring refurbishment.

It was also created with safety in mind, as its unique launch escape system is meant to allow crew to get to safety if something goes wrong anytime from launch to orbit, instead of just in the first few minutes. Most escape systems are jettisoned early; this one is not.

Each Dragon v2 will make use of eight SuperDraco thrusters, which are Draco thrusters with dramatic upgrades, that will be mounted in pairs to the walls of the capsule. These engines are designed to propel the spacecraft out of danger in the event of an incident. Each of the SuperDraco engines can produce up to 16,000 pounds-force (71 kN) of thrust, and would also be used to land the craft “propulsively on Earth or another planet with the precision of a helicopter, making possible interplanetary trips that would otherwise be constrained by ocean landings,” according to SpaceX’s webpage on the spacecraft.

Additionally, each SuperDraco combustion chamber has been created with additive manufacturing, specifically direct metal laser sintering (DMLS), a type of 3D printing. The engines as slated be tested together during a pad abort test some time in May, under the Commercial Crew Integrated Capability (CCiCap) agreement with NASA at Cape Canaveral Air Force Station in Florida. The test was originally scheduled for March, as described in Universe Today, and the exact date is still unknown.

According to NASASpaceFlight, the first manned Dragon v2 mission (SpX-DM1) “has a December 2016 launch date, ahead of a 30 day mission – most of which will be docked to the ISS – ending with a parachute assisted landing in the Pacific ocean.” Of course, this is pending U.S. Congress approval of funds for NASA and the Commercial Crew Program, and any other potential slowdowns as are common to the industry.

The last major potential variation of the capsule is a Red Dragon mission, which ideally would take a variant of the Dragon to Mars to collect samples to bring back to Earth. It, too, would use the SuperDraco engines for propulsive landing. Experts at NASA’s Ames Research Center studied the plausibility of using the system for this purpose, and in March of 2014, they explained how it is theoretically possible, as Space.com reported. The proposed launch is still a long way off, probably not until 2022 at the earliest.

Very informative. I enjoy reading about space x and their cutting edge technologies and concepts. More such article please!

Not a bad article but I believe it fails to give the reader the true significance of both Dragons 1 and 2. There could have been some mention of the most amazing aspects of the Dragon 1 capsule. Its quick completion and unbelievably small development cost. 400 million apx? Traditional space vendors would have charged 10s of billions and taken much longer. Also the article trivializes the monumental advance from expendable parachute landing craft to the reusable, boaster controlled landings of the Dragon V2. But I don’t blame Rae for playing down the Dragons. Everyone else is doing it.

Well researched technically for someone so young however however unlike you and I who follow every move SpaceX makes because of our interest in their reuse aspirations, she probably doesn`t attach as much as significance to propulsive landings on land as we do.

This was a fantastic and very informative post and then some. Thank you for getting this out to the public.

So Dragon V2 have to land in the ocean on its first trip to the station. And CST-100 gets to land on land. I see favoritism from NASA.

CST-100 is landing on land with parachutes and airbags, a simple system. Indeed, NASA originally considered this approach for Orion. For Dragon to land on land, it has to demonstrate that propulsive landing can work reliably, which has never been done before. You see favoritism, I see pragmatism. NASA isn’t paying these companies to develop new & unproven landing techniques, they’re paying for safe & reliable crew transportation.

And given the time frame, it’s pretty unlikely that SpaceX could bring a propulsive landing Dragon from testing to operational flight by 2017 anyway. They will be pursuing it on their own outside of CCDev, though, with a Grasshopper-esque test program, the DragonFly. They’ve already got their FAA clearance to do the test flights at the McGregor facility.

This is consistent with COTS, where NASA required each Dragon to be new rather than attempting to re-fly them, even if SpaceX designed them to be reusable. And you can bet that the first couple re-flown Falcon 9s won’t be carrying a NASA payload either. Once a reused Dragon, propulsive landing Dragn or reused Falcon 9 have been demonstrated as viable, then I imagine NASA will be happy to accept them and the lower price tag they ought to come with, but not before.