SpaceX’s SuperDraco engine: Abort capability all the way to orbit 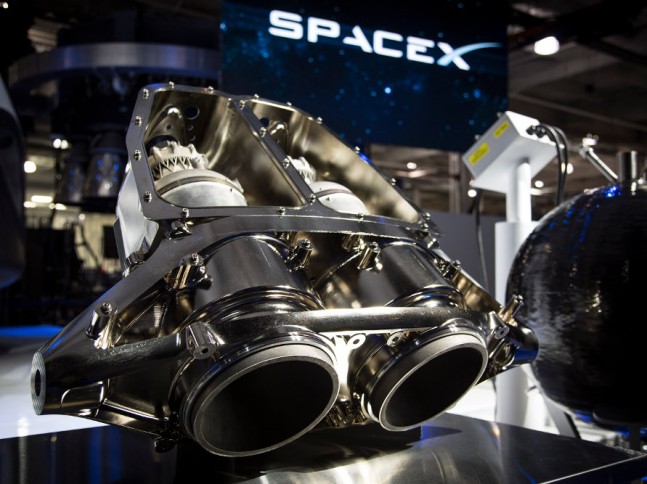 The SuperDraco engines developed by Space Exploration Technologies (SpaceX) successfully propelled a crew-rated version of the company’s Dragon capsule away from the pad during the company’s Pad Abort Test on Wednesday, May 6, just after 9 a.m. ET (13:00 GMT), in Cape Canaveral, Florida. These engines serve as the basis of the Dragon launch escape system, which is critical for fulfilling the Commercial Crew Integrated Capability (CCiCap) agreement that SpaceX has with NASA, and they could eventually be used to land the capsule softly as well. So what’s in a SuperDraco?

Initially, the basic Draco thrusters were developed, and those completed qualification testing back in April 2009. They are used on the Dragon capsule, the Falcon 9 upper stage and the Falcon Heavy upper stage for attitude control once they have reached space. For a Dragon cargo capsule, the Draco engines carry the capsule to the International Space Station (ISS) after the rocket separates.

Each Draco thruster relies on the fuel monomethylhydrazine paired with the oxidizer nitrogen tetroxide, a hypergolic pair – which means they ignite on contact and require no ignition system, thus improving their reliability for the multiple starts and stops in space. It is storable propellant, as opposed to cryogenic, and can be used many months after being fueled. Each Draco can produce 90 pounds-force (400 N) of thrust, and a regular Dragon capsule uses 18 of these engines “distributed across four pods, with two of the pods housing four thrusters and two of the pods housing five thrusters,” according to the company.

The SuperDraco was introduced in early 2012, and it uses the same hypergolic fuel-and-oxidizer pair, but it’s significantly bigger and more powerful than its predecessor. Each SuperDraco is capable of producing 16.400 pounds-force (73 kN) of maximum thrust (in vacuum), but the engines are throttled to 15,325 pounds-force (68.2 kN) of thrust to maintain vehicle stability; it’s an absolute monster compared to the Draco. According to NASA, a SuperDraco would burn through propellant about 200 times more quickly than its brother.

Eight of these powerful engines are mounted on each Dragon crew-rated capsule and together can produce 120,000 pounds-force (534 kN) of axial thrust to propel the capsule out of danger if an incident occurs. Not all eight are absolutely necessary; if one fails, a crew can still safely escape, a fact highlighted by the May 6 Pad Abort Test of Dragon.

“It was quite a complicated test, a huge credit to the engineers and technicians involved to make it happen,” said SpaceX CEO and Founder Elon Musk during a teleconference held shortly after the test. “In order for it to work well, all eight SuperDraco engines had to fire nominally and they did so, so it was a great outcome.”

The combustion chamber of the SuperDraco is created with direct metal laser sintering (DMLS), a type of 3-D printing, and made of Inconel, a strong nickel-chromium-based “superalloy” that is difficult to machine the traditional way. The use of additive manufacturing “resulted in an order of magnitude reduction in lead-time compared with traditional machining – the path from the initial concept to the first hotfire was just over three months,” according to the company’s website.

Additionally, the chamber is regeneratively cooled, which means propellant is made to pass through a jacket around the combustion chamber such that it cools the engine.

The SuperDraco thrusters reflect SpaceX’s long-time goal of reusability in space technology. These engines can be used repeatedly with a little maintenance between flights, as they remain with the spacecraft and intact from liftoff to splashdown – or touchdown.

“Had [there] been [people] on board [during the test flight], they would have been in great shape,” Musk said.

The other intent for these engines is that they could, in the future, land the capsule “propulsively on Earth or another planet with the precision of a helicopter,” allowing the capsule to be reused and “making possible interplanetary trips that would otherwise be constrained by ocean landings,” according to the company’s web page. The engine has been tested “in both a launch escape profile and a landing burn profile” and can be throttled between 20 percent and 100 percent thrust levels for precision landing.

“Dragon also has the ability to use those same engines to land propulsively, because if the propellant is not used for an abort, then it is available to be used for landings,” Musk said. “Dragon is really designed not just for carrying crew to and from the space station, but also, more generally, it’s capable of transporting scientific payloads to anywhere in the Solar System that has a liquid or solid surface, with or without an atmosphere.”

Thank you. This provides the best (simple) explanation for the Draco/SuperDraco engines.

Just wondering….. How can this test be called successful, if the flight was short of what was expected. Meaning… the flight/test wasn’t as long as designed, Didn’t achieve the height nor the distance that was expected. Also one of the thrusters didn’t burn 100% as it should have.
Is NASA going to require a re-test or is less than expected OK with NASA ? just wondering.

The test flight was successful. The engines fired and raised the capsule up and over to the Atlantic, which then safely parachuted to a water landing. It was only a test, and for that it was successful. This was the first time all 8 of the super Draco thrusters were fired at the same time. You have to expect that there will be some bugs to work out. As for a re-test, well SpaceX is doing a second abort test. This time it will be an in-flight abort test which is much harder. If it succeeds with at least as much success as the pad abort did then I’d say it will pass. Boeing is only doing a pad abort of the CST-100 and no in-flight abort test. NASA only requires 1 successful test. At least SpaceX is doing more testing than required. Now if it didn’t fire up, or blew up, or crashed of course then I guess I could understand your post, but it was considered very successful so I say, come on man?

(Note that I’m affiliated on the project…) Understand that this primarily was a ‘discovery test’.
The Pad Abort test was basically successful to launch/separate/descend, but the purpose was not just to meet a mark (i.e. reach a certain height).

The primary purpose for this Pad Abort Test seeks to gather real operational data (force,stress,vibration, etc.). Success comes from the information gained from the test.

We still want the results to show that the craft can safely and quickly leap to a safe distance without harm to occupants.

Let’s hope those results are good. Sounds like the new SuperDraco engines are pretty awesome.

p.s. glad to see how SpaceX and NASA are working together on this.

Tom, it was successful because the crew would have been saved. Also the software must have successfully compensated for the underperforming engine, probably by lowering the thrust of the one opposite. This was a good test.

The way I understand it, without knowing all the fine details of the test requirements,
1- It launched when it was told to
2- It followed the desired arc
3- It reached sufficient altitude for the parachute to open properly and completely.
4- It achieved “parachute open” terminal velocity well before splashing down.
The 2nd test is already planned. The MaxQ abort is significantly more difficult. If that test does get desired results, then the pad abort test is almost moot.

Not only do I think the Pad Abort Test was successful, I think it exceeded it’s goals. This test proves additional criteria not specified in the test.
1. even with partial single engine failure primary objective was achieved.
2. claimed redundancy was proved.
3. engine failure didn’t cause collateral damage. IE: Dragon2 continued on correct trajectory.
4. even with target altitude not achieved all systems operated at optimum points in time.
5. having failures now will help perfect the system,
Dragon2 will be the safest way to fly.

Another great article, Rae. Short, precise, and informative.
Thanks much