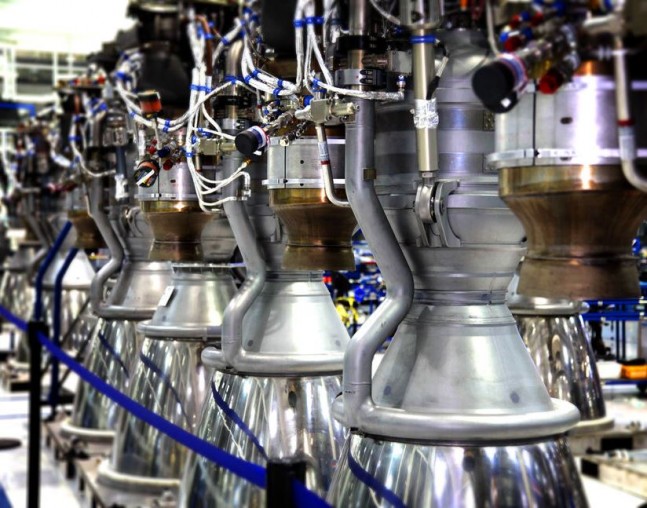 SpaceX's Merlin 1D rocket engine has achieved an impressive track record in a very short amount of time. The engine was designed from the outset to be crew-rated - a critical aspect considering what the engines' next big task is. Photo Credit: SpaceX

Space Exploration Technologies (SpaceX ) Falcon 9 rocket V1.1 gets part of its name from the fact that the booster uses nine Merlin 1D engines in its first stage. With the aerospace firm planning on conducting a pad abort test of the crew rated version of their Dragon spacecraft (V2) on May 6, SpaceFlight Insider and its partner, the Florida Institute of Technology provide you with this review of these engines – as well as the missions that they were built for.

SpaceX’s Director of Mission Assurance, Hans Koenigsmann, told SpaceFlight Insider that the Merlin family of engines was designed from the outset to be used on crewed missions.

“Actually, the 1D and the Falcon 9 was always designed to be crew-rated; to me, this always seemed a little optimistic (laughs), but, as I said earlier, the goal of SpaceX was always human space flight and we never had any doubt on this. If you will recall, the first Dragon capsule was a cargo ship – that had a window. That was our way of saying that we are ready for astronauts,” Koenigsmann said. SpaceX has ramped up production of the successful Falcon 9 V.1, which has seen five flights in the first four months of 2015 alone. Photo Credit: SpaceX

These nine engines are arranged in a pattern known as the Octaweb configuration, where eight of the engines surround a single center engine in a circular formation. The center engine runs at lower power in order to create a balanced launch sequence and to distribute the thermal properties to avoid creating major hot spots. In addition, this improvement from its former three-by-three square formation adds reliability to the Falcon 9 vehicle; two engines could shut down and the vehicle could still fulfill its intended mission.

The Merlin 1D engine, developed in Hawthorne, California, has undergone rigorous testing prior to being used on actual flights. This engine went through a 28-test qualification program at SpaceX’s rocket development facility in McGregor, Texas, in order to be used for the Falcon 9 launches.

“The Merlin 1D successfully performed every test throughout this extremely rigorous qualification program,” said Elon Musk via a release issued by the company. The Merlin 1D has become a critical element of SpaceX’s effort to recover the first stage of rockets that have sent payloads to orbit. Photo Credit: Elon Musk via Twitter / Ben Cooper

The Merlin 1D utilizes a high-pressure liquid oxygen and kerosene propellant as fuel. The dual-impeller, single-shaft turbopump displaces both the fuel and the hydraulic fluid necessary for control of the thrust vectoring.

In addition to the nine engines in the first stage, the Falcon 9 v1.1 uses a single Merlin Vacuum (1D) engine variant in its second stage. Most recently, SpaceX has been using their Merlin 1D powered Falcon 9 v1.1 launch vehicle to frequently deliver payloads and supplies to the International Space Station (ISS) packaged in the Dragon spacecraft, the cargo resupply missions (CRS 1-6 so far).

This engine has been tasked with carrying out a wide-array of missions, which include the Apr. 27, 2015, flight of a Falcon 9 carrying the TurkmenistanSat telecommunications satellite.

The Merlin 1D has allowed the Falcon 9 v1.1 to far outstrip its predecessor, the v1.0 version of the now iconic booster in terms of performance. The nozzle thermal and chamber margins have been improved, which have seen an increase in terms of the amount of thrust at sea level that the new version of the Merlin engine can provide – from the previous 95,000 lbf to the current 147,000 lbf (422.5 to 654 kN).

For the Falcon 9, this equates to 1.3 million pounds-force (5,885 kN) of thrust at sea level and a total of 1.5 million pounds-force (6,672 kN) above the atmosphere. This makes the Merlin 1D have a 155:1 vacuum thrust-to-weight ratio, the highest of any other booster currently on the market. Also, the Merlin 1D has 70-100 percent throttle, whereas the Merlin 1C had no throttle capability. This allows the Falcon 9 to be more flexible, effectively reducing stress on the engines.

The Merlin 1D engines are also going to be used in the Falcon Heavy vehicles. The Falcon Heavy rocket design is essentially three Falcon 9 rockets meshed together. SpaceX has continuously upgraded its various offerings; the company’s engines, rockets, and spacecraft have all evolved as SpaceX has reviewed their performance. Photo Credit: SpaceX

For the first stage launch sequence, the Falcon Heavy uses three Octawebs that encompass nine Merlin 1D engines totaling to 27 engines used for the Falcon Heavy. These engines, all working together, should produce approximately 4.5 million pounds-force (20 MN) of thrust during the first stage of the launch. Due to the number of engines and the amount of thrust each engine can produce, this launch vehicle can continue the mission even with multiple engine failures. However, controlling that many engines in one stage may prove difficult.

The Merlin 1D engine design allows room for adjustments, depending on whether it is used in the Falcon 9 or the Falcon Heavy. Moreover, SpaceX continues to improve the Merlin family of engines, making them more powerful and flexible for future missions.

“There are certain safety factors that you have to keep and those are already worked into R&D and into the vehicle right from the get-go,” Koenigsmann told SpaceFlight Insider. “It’s interesting because the way that this worked out, for Dragon, the loads are different than for the fairing – so, you actually don’t lose any performance, its right on the money for what you would have for pure satellite missions anyways. So, it worked out well, we have the right safety factors in there and we are now in the process of certifying both vehicles for manned space flight.” Hodges is planning a career in public science communications, and will be using her internship with SpaceFlight Insider to get great science and engineering communications experience while she works on completing her studies.

Amoree, I consider this one of the best articles I’ve read on a subject I love. Congratulations to you, Florida Tech and SpaceFlight insider for a great job.
Peter Leach – Clearwater, FL
P.S. Ditto Roy Lewis re:Spacex

Wow, what a great article! There’s so much poorly-researched clickbait on SpaceX — so refreshing to read something I can actually learn from. Pretty wild that the Falcon Heavy is going to have 27 engines!

Wish there was further details on this line “However, controlling that many engines in one stage may prove difficult.” Such as how they plan on doing with this.

Do you have any info as to whether or not the new thrust stats on the improved Merlin D translate to more cargo to orbit?