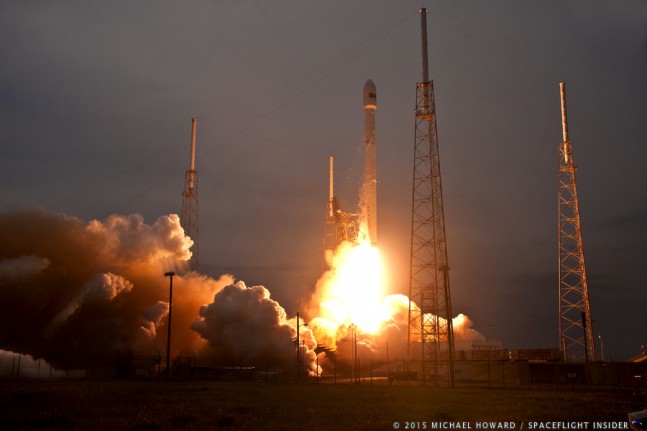 Turkmenistan heralded a new era of communications with the successful launch of their first national satellite. Space Exploration Technologies (SpaceX ) lofted the TurkmenAlem52E/MonacoSAT to a geostationary transfer orbit at 7:03 p.m. EDT (23:03 GMT). Nine minutes after liftoff, the spacecraft was reporting operational status in a low-Earth parking orbit. This launch comes just two weeks after SpaceX successfully launched the sixth Commercial Resupply Service missions (CRS-6). The Falcon 9 booster used for this launch was not equipped for a return attempt.

Through it all SpaceX only had one issue that threatened tonight’s launch – weather.

With a front of bad weather moving in, SpaceX and the 45th Space Wing closely monitored the conditions in the Florida skies, especially some rather nasty weather coming in from the Gulf of Mexico. While the launch window opened at 6:14 p.m. EDT (2214 GMT), anvil clouds in the region were not at an acceptable distance until 7:03 p.m. EDT. Tonight’s launch was the first satellite to be sent aloft for Turkmenistan – which oddly has restricted the use of satellite dishes within the country. Photo Credit: Mike Howard / SpaceFlight Insider

Despite the fact that tonight’s launch meant that the Hawthorne, California-based firm had conducted more missions to date in 2015 than its rival, United Launch Alliance (ULA ), SpaceX founder and CEO noted in a Twitter post that launching rockets had not yet become routine.

The new spacecraft is the country’s first spacecraft for the National System of Satellite Communications (NSSC). The Turkmenistan National Space Agency will operate the satellite. The state-run agency was created in 2011 specifically to help foster the development of a national communications system. President Gurbanguly Berdimuhamedow gave the final approval for the agency’s creation.

The satellite, officially designated TurkmenAlem52E/MonacoSAT, was designed by the French and Italian-owned Thales Alenia Space. The spacecraft has an estimated lifespan of 15 to 16 years. Constructed on the Spacebus-4000C2 platform, it carries 38 active Ku-band transponders. The 4000C2 is an enlarged version based on the very successful Spacebus 3000/4000 B-class spacecraft.

TurkmenAlem52E is a medium-class telecommunications platform weighing in at 9,920 pounds (4,500 kg). Power for the satellite is provided by two solar arrays and an onboard battery system. The configuration gives the satellite up to 10 kW of power over a 100-volt bus. Stationkeeping is controlled with an S400 propulsion system — An Attitude and Orbit Control System (AOCS) with a built-in star tracker designed for geostationary operations.

Thales Alenia Space was created when Alcatel Space and Alenia Spazio merged in 2005. In 2006, Alcatel agreed to sell its share of the company to Thales group, thereby creating the company in its current form. Thales Alenia Space has a long history of space activities. They provided the Multi-Purpose Logistics Modules used to transport cargo inside the space shuttle orbiters. The Turkamenalem satellite being prepared for launch. Photo Credit: Thales

For Turkmenistan, launching this satellite represents a major victory in the face of numerous obstacles. In order to place the satellite in orbit, the Turkmen Ministry of Communications signed an agreement with Space Systems International-Monaco S.A.M. The agreement allows the Turkmen satellite to be stationed at the Monaco-registered 52 degrees east position. Additionally, the spacecraft was originally scheduled to launch on a Chinese CZ-3B/G2 booster, but the launch operations were transferred to SpaceX in June 2013. Changes to the United States’ International Traffic and Arms Regulations banned several U.S.-made components from being transported to China, thereby necessitating the move to a U.S.-based launch provider.

Once the legal hurdles were crossed, technical issues cropped up. The original launch date for the flight was scheduled to be March 21, 2015, but that was changed after the discovery of a potential issue with the helium tanks. While the tanks onboard the Falcon 9 rocket for this flight were not affected, other tanks from the same production line failed in testing. As a precaution, SpaceX contacted Thales and reset the launch date to no earlier than April 24, 2015. The newest launch date of April 27, 2015, was set after a complete inspection of the helium pressure system on board.

Controversy over the launch of TurkmenAlem52E/MonacoSAT has also developed. The success comes in the wake of new laws within the country of Turkmenistan banning the use of satellite dishes. The move is seem by some as a way of blocking access to independent media outlets.

The government maintains the move is strictly an aesthetic one as the dishes prove unsightly on multi-family dwellings. Residents of Turkmenistan have been urged to remove the dishes and subscribe to the government-run cable services instead.

For SpaceX the launch comes at a time of heightened activity with the aerospace firm planning on conducting a pad abort test of their Dragon spacecraft on May 5 from SLC-40 as part of the ramp up to having astronauts fly on SpaceX’s Dragon V2 spacecraft under NASA’s Commercial Crew Program. In the coming months, SpaceX has an array of launches planned to take flight both from Cape Canaveral as well as Vandenberg Air Force Base in California.

Perhaps the most anticipated event of the year – is the first flight of SpaceX’s Falcon Heavy booster. At present, SpaceX plans to conduct the inaugural flight of the rocket in the fourth quarter of 2015 from Kennedy Space Center’s Launch Complex 39A. This evening’s launch comes at a time of heightened activity for SpaceX who has several more launches on its 2015 manifest. Photo Credit: Mike Howard / SpaceFlight Insider

Goooooo SpaceX. Lets hope they keep their quality control strong, and never grow complacent, as that is when trouble will rear its ugly head. Everyone’s adrenalin begins to flow on any launch! I am not sure if it will ever get routine, as Mr. Musk hopes!