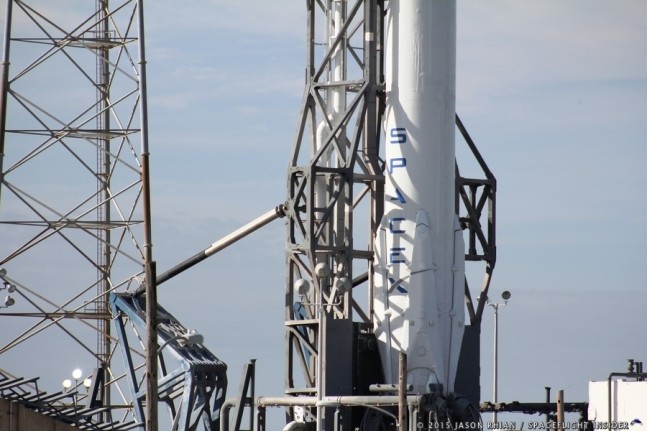 CAPE CANAVERAL, Fla. — Space Exploration Technologies (SpaceX ) successfully completed a static fire test of the aerospace firm’s Falcon 9 v1.1 rocket that will be used to launch the DSCOVR into orbit on Feb. 8. The test was performed with the rocket on the pad at Space Launch Complex 40 (SLC 40) at Cape Canaveral Air Force Station in Florida and ran for the full duration.

For this test, an eight hour window was blocked off, which included additional time in case any issues arose requiring further attention. However, on the actual launch day, crews will be working with an instantaneous window with no time for troubleshooting. SpaceX has stated it will continue the testing of its first stage recovery system on this launch. Photo Credit: SpaceX

The static fire test – is the last in a long series of requirements that has to be carried out before the F9 is given the final go-ahead for launch. During the test fire, controllers walk the Falcon 9 v1.1 through all the steps that it will encounter at launch. On launch day, the Falcon 9 will be fueled with RP-1 (a refined version of kerosene) propellant as well as the liquid oxygen oxidizer two hours and thirty five minutes before liftoff.

During the test, SpaceX walks the booster through the entire launch sequence – including the activation of the nine Merlin 1D rocket engines that comprise the Falcon 9’s first stage. The rocket is held in place and the engines are only active long enough to confirm that everything is functioning as advertised.

DSCOVR is a joint NASA-NOAA mission (along with the U.S. Air Force) which is designed to study solar activity and provide early warning of dangerous solar events that could impact Earth and space-based systems. The mission has already cleared the Key Decision Point C Review, suggesting that the delay could be related to the Falcon 9 booster itself.

DSCOVR is currently managed by NASA’s Goddard Space Flight Center in Greenbelt, Maryland and, when deployed, will orbit at the L1 libration point. This is the location in space where the Sun’s and Earth’s gravitational pull cancels each other out. L1 is approximately one million miles away from Earth towards the direction of the Sun.

If everything goes according to plan, the spacecraft will be able to provide crucial data on solar flares which could cause an estimated $1 to $2 trillion in damage to systems such as the Global Positioning System (GPS), air travel, satellite operations as well as human space exploration efforts. DSCVR in the clean room prior to being encapsulated within the payload fairing. Photo Credit: NASA

Through this partnership, NASA used funds obtained from the NOAA to refurbish the DSCOVR satellite and its scientific instruments which were placed in storage for several years. NASA is also working on the ground support systems for DSCOVR.

The launch of DSCVR on Feb. 8, has a scheduled liftoff time of 6:10 p.m. EST (2310 GMT), with a backup launch date of Feb. 9 at 6:07 p.m. EST (2307 GMT). This flight will mark the second launch for SpaceX in 2015, and will offer the NewSpace company a second attempt at landing the first stage on an autonomous spaceport drone ship (ASDS), more affectionately referred to as “Just Read the Instructions”, in honor of the science fiction author Iain M. Banks.

Following the Jan. 10 launch of a Falcon 9 carrying the Dragon spacecraft to the International Space Station (ISS), SpaceX made the first-ever attempt at landing a rocket’s first stage on the ASDS. As previously reported on Spaceflight Insider, the first stage landed hard resulting in what SpaceX referred to as a “rapid unexpected disassembly” or RUD for short. Prior to the Jan. 10 landing attempt, the NewSpace company has made several attempts at oceanic soft landings. Once the company believes it has mastered an oceanic pad landing, the company plans to land on solid ground at Cape Canaveral Air Force Station’s Space Launch Complex 13 (SLC-13).

Stay tuned to Spaceflight Insider for further coverage of this mission.

There is an intriguing choice of words in this article. The landing attempt is attributed to the NewSpace company and not to SpaceX itself. I’ll attribute NewSpace to journalistic flair in this article because a quick web search found no reference to NewSpace. My search did remind me that Boeing v. SpaceX is being billed as the “new space race”. Go SpaceX, a new Seattle entrant versus an old Seattle goliath. Though Boeing does get first film credit having been emblazoned on the space plane in “2001: A Space Odyssey”.
Rick in Seattle

Thanks Jason. I’ll add these to my watch list.

Hi Rick,
You misunderstand, the term “NewSpace” refers to a type of company. You mentioned a quick websearch, not sure what search engine you used, but NewSpace is a (well) established term, not certain how your search turned up nothing. The links were provided to assist you with this. Kind regards.
Sincerely, Jason Rhian – Editor, SpaceFlight Insider

Thanks again. I understood completely once you sent those links. I still am surprised that when I did a google search for “NewSpace” (all one word), the first page of results was all about the “new space” race between SpaceX and Boeing. Unfortunately, I did not look beyond that first page in my quick search. Of course, google knows I’m in Seattle area and the SpaceX entry into Seattle area has been high in the news. Obviously, contextual searches can be misleading.

Okay, I keep hearing conflicting dates for the DSCOVR launch. The SpaceX site shows February 9th, though this and other websites have cited the 8th as the launch date. So which is it? I’m going to stick with the Tuesday date for now (Eastern Standard Time, which is local time for the launch and my location) but sometimes I wonder if the SpaceX website is even accurate.

Hi Matt,
We originally reported Feb. 9 as that was the information we obtained from an inside source. NOAA and NASA stated the eighth What you’re stating blends very well with what we were initially told, that the launch wouldn’t occur before Feb. 9. – we will research the matter and try to provide you with an accurate date as soon as we’re able.
Sincerely, Jason Rhian – Editor, SpaceFlight Insider