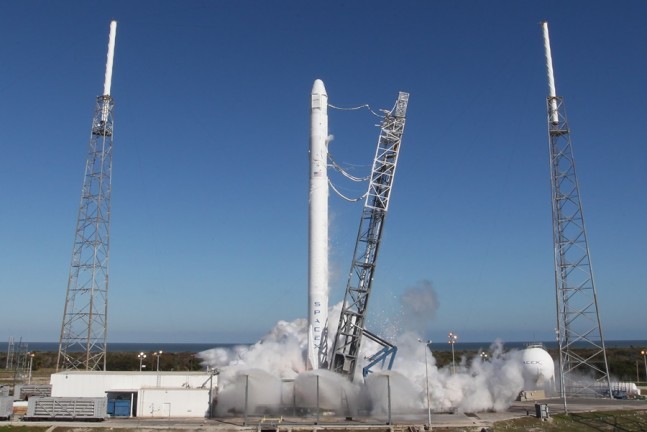 The static test fire is the last milestone that has to be completed before the Falcon 9 v1.1 is cleared for launch. Photo Credit: SpaceX

CAPE CANAVERAL, Fla. — Space Exploration Technologies (SpaceX ) successfully completed a static fire test of the aerospace firm’s Falcon 9 v1.1 rocket that will be used to launch a pair of satellites on Sunday March 1. The test was performed with the rocket on the pad at Space Launch Complex 40 (SLC 40) at Cape Canaveral Air Force Station in Florida and ran for the full duration.

The static fire test is the last in a long series of requirements that has to be carried out before the Falcon 9 is given the final go-ahead for launch. During the test fire, controllers walk the Falcon 9 v1.1 through all the steps that it will encounter at launch. On launch day, the Falcon 9 will be fueled with RP-1 (a refined version of kerosene) propellant as well as the liquid oxygen oxidizer two hours and thirty five minutes before liftoff.

During the test, SpaceX walks the booster through the entire launch sequence—including the activation of the nine Merlin 1D rocket engines that comprise the Falcon 9’s first stage. The rocket is held in place and the engines are only active long enough to confirm that everything is functioning as advertised.

SpaceX will not attempt to land the first stage of this Falcon as the rocket used in this flight does not have landing legs. The NewSpace company is striving towards the ultimate goal of rocket re-usability. As such, hydraulic fluid-powered grid fins were added to the rocket’s first stage in an attempt to slow it down during re-entry and make a soft touch down.

An autonomous spaceport drone ship (ASDS) was constructed as a floating platform for the Falcon 9’s first stage to land. Once the oceanic landings are mastered, SpaceX has plans to convert Cape Canaveral’s historic Launch Complex-13 (LC 13) into the first ever landing pad. The first ASDS landing attempt ended in a “rapid unscheduled disassembly” (RUD) of the first stage, and choppy seas forced a second attempt to be skipped. SpaceX’s next landing attempt will be in April with the CRS-6 mission. EUTELSAT 115 West B with its co-passenger. Photo Credit: Boeing Defense and Space

For this mission, SpaceX will loft two satellites into orbit—EUTELSAT 115 and ABS 3A. Both satellites are based on the 702SP platform, with ABS 3A being deployed first.

EUTELSAT 115 West B will extend the company’s current satellite coverage, enabling Eutelsat to better serve their customers with high-growth data, video, mobility, and government applications. Manufactured by Boeing, EUTELSAT 115  is the first all-electric satellite of the fleet.

The Asia Broadcasting Satellite (ABS) company is operating the Boeing manufactured ABS 3A satellite. Designed to replace the aging ABS 3 satellite launched back in 1997, ABS 3A will provide coverage to the Americas, Europe, Africa, and the Middle East. The satellite will support VSAT services, TV distribution, IP trunking, cellular backhaul and maritime services.