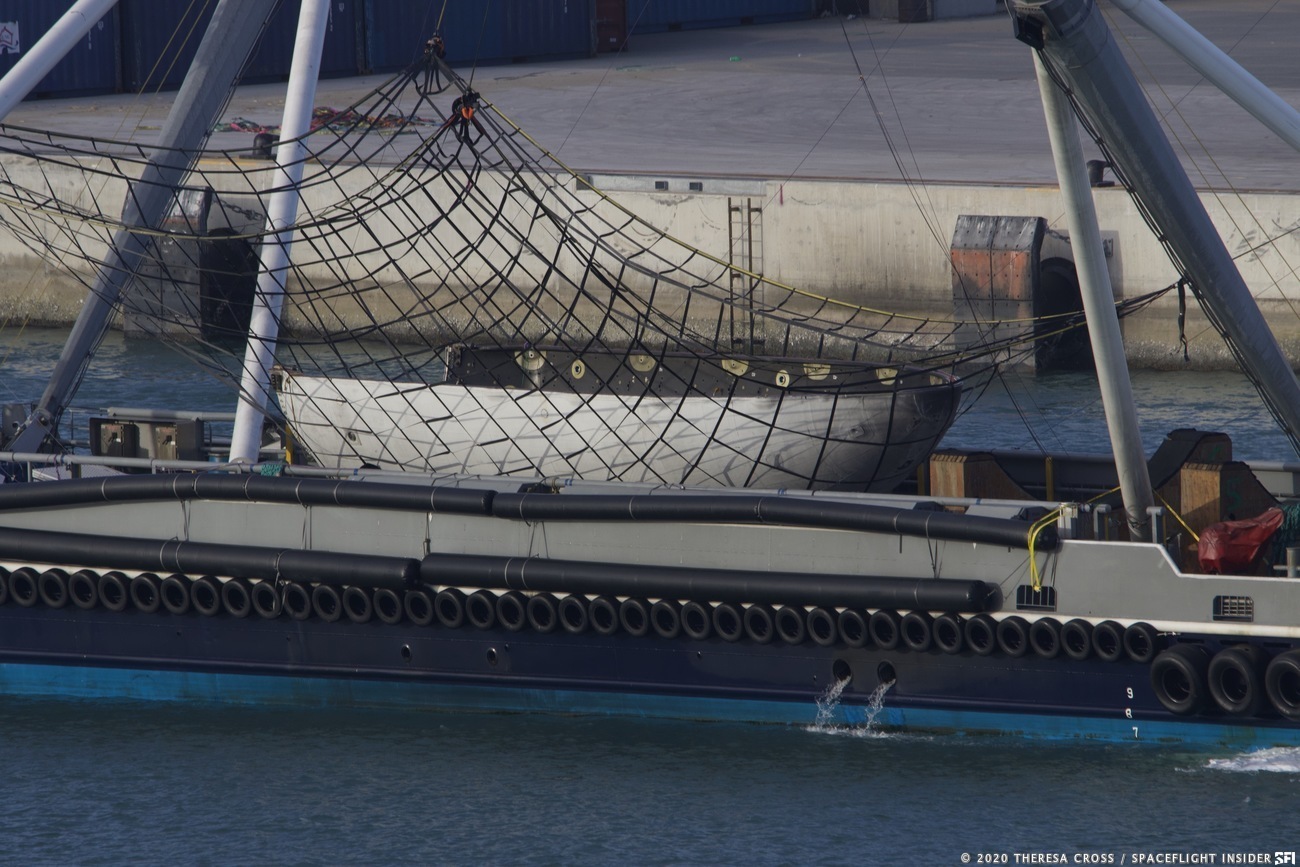 File photo of a Falcon 9 fairing half, resting in the net of one of two SpaceX fairing recovery ships as it arrives in Port Canaveral. Ms. Chief and Ms. Tree both caught fairing halves mid-air on July 20, 2020, following the launch of the ANASIS 2 mission. Photo: Theresa Cross, SpaceFlight Insider

For the very first time in the history of the storied spaceflight provider SpaceX, both Falcon 9 payload fairing halves have been successfully caught mid-flight by the companies twin recovery ships.

In a tweet put out by company CEO and owner Elon Musk, he stated “Both fairing halves caught from space by SpaceX ships!” The tweet marks the culmination of several attempts to recover the fairings, which up until now has been a daunting task, one which has never occurred in the history of spaceflight.

Making this possible is an elaborate system of thrusters and a large steerable parafoil. As the fairing begins to fall back after it is jettisoned from the rocket, the fairing is positioned in such a way to maximize survivability and slow the descent. Each composite fairing half costs just over $3 million to manufacture, which would otherwise fall from space and into the ocean. 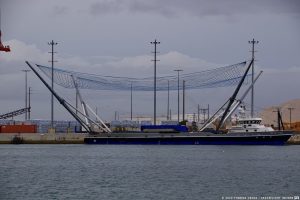 The company uses twin recovery ships dubbed “GO Ms. Tree” and “GG Ms. Chief” (pronounced ‘mystery’ and ‘mischief’, respectively) which are fitted with large cargo nets stretched across steel arms that significantly widen the boats target area. The ships move in conjunction with the parafoil fitted to the fairing halves in order to position themselves underneath the falling fairing for the optimal catch opportunity.

The company has enjoyed limited success in its previous attempts, which began in 2017. In these earlier attempts, they caught a single fairing half 3 times, and on multiple other occasions fished the fairings out of the water and ultimately reused them on following flights, a continuation of the company’s goal to reuse as much as possible in order to further drive costs down. Ideally, each ship would catch the fairing mid-flight, preventing it from coming into contact with salt water; this greatly reduces the time and cost for refurbishment. Mid-flight catches can also significantly reduce the possibility of damages to the fairing.

The July 20, 2020 mission also saw the successful recovery of the Falcon 9 first stage booster, which had previously launched American astronauts from US soil for the first time since the conclusion of the Space Shuttle program; it will likely be flown a third time. The payload, a South Korean military satellite, was placed into orbit successfully. 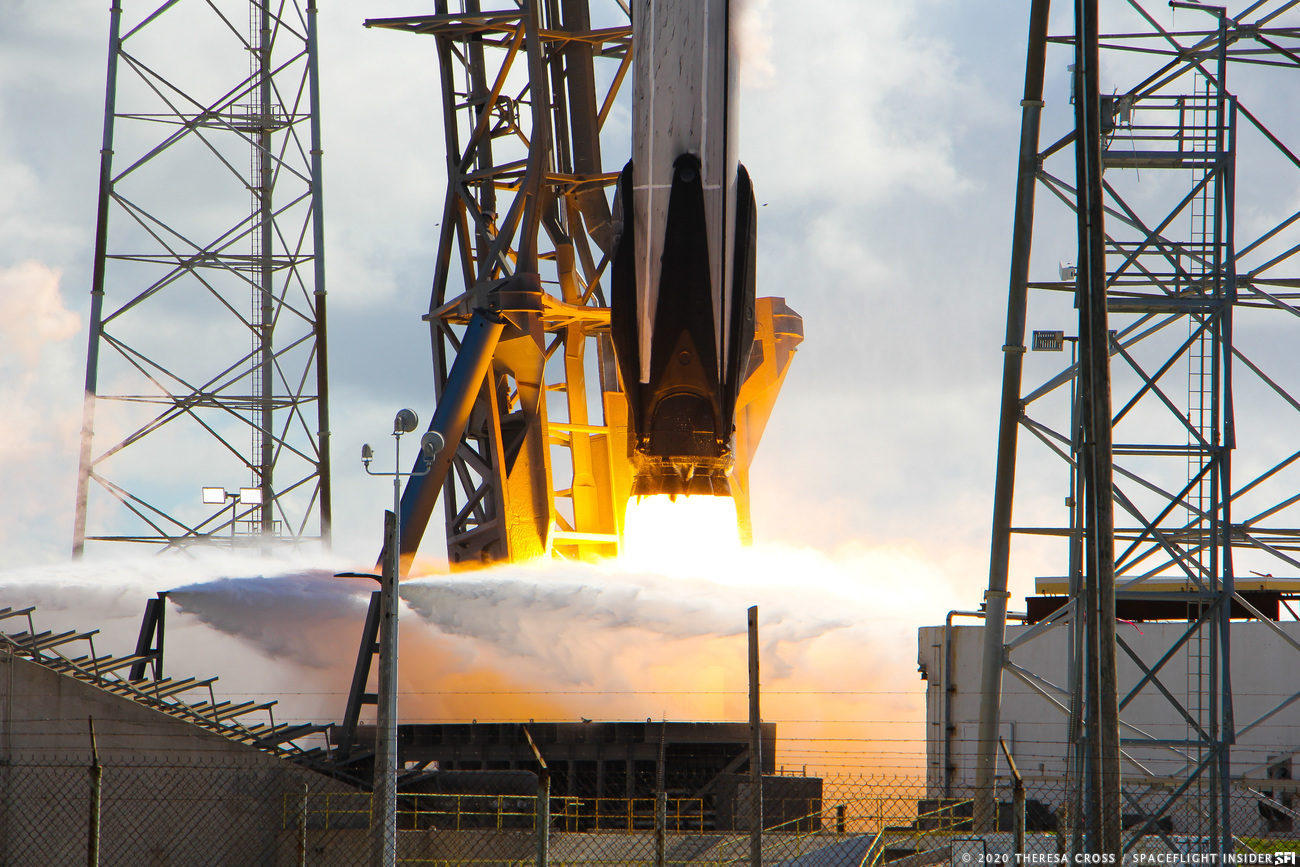 While video or images of the recovery haven’t yet been released by SpaceX, (we believe to be likely due to the ships’ far offshore position) we can show you video (below) from a successful recovery, caught in August, 2019. Time will tell if this success is based on modifications made following the two most recent failed attempts to recover the fairings, or if it was simply pure luck. Keep tuned to Spaceflight Insider for further updates.

UPDATE: SpaceX has posted links to a pair of fairing capture videos

Videos of yesterday’s catch of both fairing halves pic.twitter.com/yzTDFzlulL

Wow!!! That was an awesome catch and amazing video! Thank you Mr. Musk and your team for the awesome work! Continued good luck! Connie