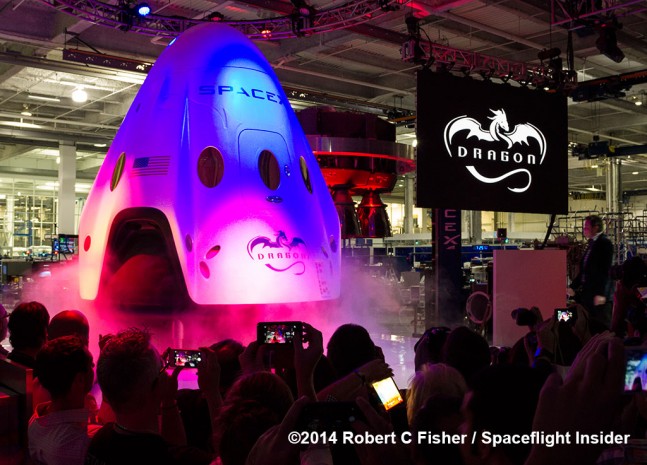 SpaceX unveils what it hopes will be the next vehicle to transport astronauts to and from the ISS. Photo Credit: Robert Fisher / Spaceflight Insider With relations between the U.S. and Russia at a low, who currently flies astronauts to and from the space station, the need for a crew-capable vehicles like Dragon V2 – is becoming more and more important.

Currently SpaceX is in the running with two other companies, Sierra Nevada Corporation and Boeing, to produce crew-capable spacecraft to ferry astronauts to and from the ISS.

NASA’s Commercial Crew Program is one of a growing number of NASA initiatives designed to hand off responsibilities normally exclusively the purview of the space agency. SpaceX and Orbital Sciences Corporation have already conducted numerous resupply missions to the ISS.

Given that Dragon V1 has already flown to the ISS four times – SpaceX is viewed as being in the lead in terms of carrying out these services.

This new version of Dragon is taller in order to allow enough room for eight rocket engines, which will be arranged in pairs around the outer walls, four landing legs and a flip-out nosecone that hides a docking port. The vehicle is designed to support up to seven astronauts and will not require the Canadarm2 for berthing (Dragon does not dock to the ISS). Currently with Dragon V1, when it reaches the ISS, the Canadarm2 secures it and carries the vehicle to a berthing port. When discussing the docking capabilities, Musk said: “The Dragon Version 2 is capable of autonomously docking with the International Space Station—potentially other things—without needing the station arm.”

Once Dragon V2 is ready to return to Earth, it will back away from the station and the nosecone will close. Dragon V2 is equipped with SuperDraco thrusters, to help control reentry and each capable of producing 16,000 pounds of thrust. Each engine is encased in a nacelle, protecting both the engine and the spacecraft from any potential damage. The engines are arranged in pairs around the craft with only one engine in each pair necessary for a safe landing. Musk told the audience: “The reason that this is really important, apart from the convenience of the landing location, is that it enables rapid re-usability of the spacecraft. You can just reload propellant and fly again.”

Everything on this spacecraft, from the heat shield to the engines, is designed to be reusable.

The night was one dedicated to possible futures in terms of human space exploration. When he was asked to expound upon his thoughts regarding space travel and how important he views re-usability is to spacecraft technology, Musk had this to say: Musk also went on to say the Dragon V2 will be able to land with the accuracy of a helicopter. During landing, the thrusters will briefly fire before the landing legs are extended and touchdown occurs. If the on board flight computer detects any sort of issue with the thrusters, parachutes are available as an emergency backup. In comparison, the Dragon V1 always lands with the help of parachutes.

The whole design of Dragon V2 is sleek, clean and simple. During the presentation, Musk climbed inside the capsule and gave us a personal tour. The crew compartment has two rows, with the command chair or pilot’s seat in the top row. All seven seats appeared to be made of leather and were equipped with both lap and shoulder belts.

SpaceX prides themselves on manufacturing as well as design advances. The company strives to produce the best product and increase production rates all while keeping the cost as low as possible. Dragon V2’s SuperDraco thrusters are produced entirely with a 3D printer, making this vehicle the first rocket to contain printed parts.

The SuperDraco thrusters have already undergone ground test firings and could make its first unmanned test flight at the end of 2015 and its first manned flight midway through 2016.