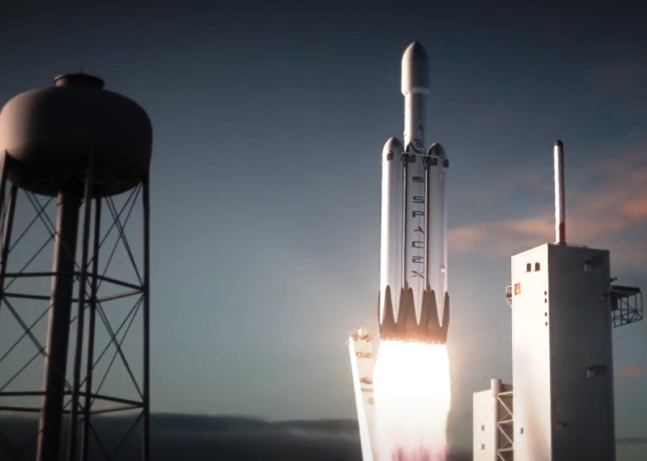 LC-39A will be the future launch site of the SpaceX Falcon Heavy rocket. Image Credit: SpaceX

Hawthorne, California-based Space Exploration Technologies (SpaceX ) has released animation of the upcoming launch of one of the company’s Falcon Heavy rockets lifting off from Kennedy Space Center’s Launch Complex 39A in Florida. SpaceX and other aerospace firms have released a lot of animation, however; at about 41 seconds in, this latest video begins to go off the usual script. The video shows what could be one of the most spectacular changes in terms of heavy-lift attempted to date.

Designed in a similar layout as United Launch Alliance’s Delta IV Heavy, the Falcon Heavy is of a triple-bodied design. Much like the liquid boosters on the Delta IV Heavy about a minute-and-a-half into the flight, the two side boosters are jettisoned. This is where things break from the traditional script.

The booster “right” themselves and conduct a controlled ballistic reentry – side-by-side. The two boosters then return to what is likely Cape Canaveral Air Force Station’s Space Launch Complex 13 – and land on two of what appear to be five landing sites at the complex. Each of these landing sites – is marked with a large “X.” Then the lone central core, having completed its mission, readjusts its heading – and heads back to Earth where it too lands.

The video bears some resemblance to one issued by NASA of the Space Agency’s new heavy-lift booster, the Space Launch System or SLS. SpaceX plans to carry out a pad abort test of the company’s Dragon V2 spacecraft in March 2015. Photo Credit: SpaceX via Twitter

To date, SpaceX has come very close to carrying out the all-important last step of landing on a solid platform. During the Jan. 10 flight of the company’s Falcon 9 v1.1 – the booster made it all the way to a landing barge placed out in the Atlantic Ocean some 200 miles off the Coast of Florida. However, the booster’s first stage struck the barge and burst into flames.

Being able to return the first stage and its precious rocket engines back to Earth will forever change the space flight landscape as it will mean that a large portion of what was once single-use can now be reused.

SpaceX has stated that it plans to carry out the first launch of the Falcon Heavy later this year. While the company has redefined how launches are conducted having 27 of its Merlin 1D engines work in unison – is very different from the nine that are used in the Falcon 9 v1.1. Similarly, landing three booster cores is very different than landing just one. Given that SpaceX has developed a pattern of doing exactly what it says it will do – many aerospace analysts are giving the NewSpace firm the benefit of the doubt.

The coming year could be a very important one for SpaceX. Not only does the company plan to carry out the test flight of the Falcon Heavy, it also plans to conduct a critical pad abort test of its Dragon V2 spacecraft in March and has some 17 missions on its manifest – with four taking place from Vandenberg Air Force Base’s Space Launch Complex 4.

This is all very exciting .thank you!

Epic!
Thanks for the great article accompanying this awesome video.

With 3 launch sites by 2016 they’re going to need another factory, or two. And they still need BFR facilities. This while ULA is talking about contracting down to 2 launch sites, one per coast.

Nice post. Good luck to the gang at SpaceX.

Hi Jason. Thanks for this summary. Seems to me a bit unlikely that the centre core will make it back to land although guess it’ll depend on the mission parameters. IIRC SpaceX indicated a barge landing for most of the FH planned scenarios hence the importance of proving out that concept, not to mention the standard F9 flights.
Also seems that every year is turning out to be interesting at SpaceX which is great for the interested public.
Do I detect a slight softening of your scepticism wrt SpaceX.

Mr. Shipley,
A journalist’s job is to tell the story be it good or bad. SpaceX fans seem to deem anything that isn’t gushing with praise as “pessimism” or “skepticism.” When SpaceX dubs their 2.3 launches a year as “routine” and initiated a media blackout? We called them on it because they were wrong. When they almost land on a barge we highlighted the historic nature of their actions.

What you and those like you attempt to make a negative thing is, in actuality, the way the media is supposed to work. Some SpaceX employees even pretend to be media and host webcasts slamming anything that doesn’t support the company that pays them – this is a severe ethical violation and a direct conflict of interest.

What you’re encountering here is what many outlets seem to have forgotten how to be – fair. When they do good? That’s what we report. When they don’t? That’s what we report. I’m unsure why you have such a hard time with this concept. My advice is to stop trying to “detect” something and realize that what we strive to do is to report what is happening, without the spin and without the hype.

Jason Rhian,
Your doing a great job, I come and read everyday. Keep it up.
~Kramer

One of the reasons I like to come to this web site is because there seem to be a fair number of individuals that have a decent working knowledge of rocketry. (With some rare exception of course)

Mr. Shipley
Are you suggesting that the centre core would not have enough fuel due to required height of staging, or would it be too far down range for a recovery?