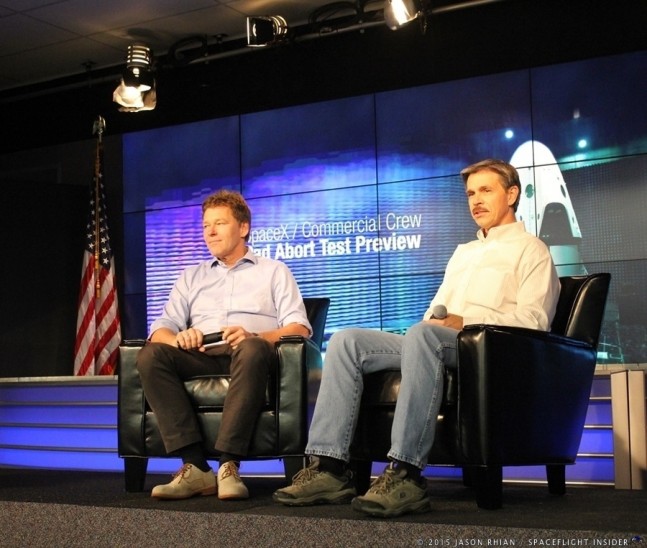 CAPE CANAVERAL, Fla — SpaceX Exploration Technologies (SpaceX ) is just a few days away from carrying out a pad abort test of the NewSpace firm’s Dragon V2 spacecraft. With this major milestone set to take place, an aspect that was common place throughout the sixties is set for a comeback – crewed missions launching from Cape Canaveral as opposed to Kennedy Space Center.

During a press conference that was held on Friday, May 1, Jon Cowart, NASA’s Commercial Crew Program partner manager, along with SpaceX’s vice president of Mission Assurance, Hans Koenigsmann, detailed the upcoming mission along with the aspects of the test profile covered at length.

“Don’t wait for the sound, because the test is going to be over by the time you hear the sound,” Koenigsmann said. “Bear with us, this is a test after all. That’s why the launch window is so long.”

Koenigsmann noted that Dragon will utilize the eight SuperDraco engines mounted onto the sides of Dragon (as opposed to the more traditional top mounted launch abort system that most other boosters have used) for this test flight. The test craft will be pushed to an altitude of about 5,000 feet (1,524 m), some six thousand feet (1.83 km) out across the Atlantic Ocean before three parachutes provide a soft splashdown.

Cowart underscored the need for patience in terms of this test and made sure to mention that the SuperDraco engines are 3D printed and that the pad abort test will mark the first time that all eight have been fired at a single time.

“We are going to take the time that we need to get it right,” Cowart added. “This is a development test, we re developing a system, looking very hard at how the SuperDracos will operate during this test.”

According to Koenigsmann, the Dragon V2 will fire its eight SuperDraco motors for approximately six seconds. The test article will then coast for an additional 20 seconds where it should reach a maximum altitude of about 5,000 feet (1,524 meters). Koenigsmann told SpaceFlight Insider that the vehicle’s trajectory should take it about 6,000 feet (1,829 meters) out across the Atlantic.

The “Trunk” portion of the spacecraft will then fall away from the craft. A few seconds after that and the drogue parachutes should deploy, followed by the primary parachutes. After what is hoped to be a soft splashdown, recovery vessels will collect Dragon – and her “pilot”.

“Buster” a test dummy will ride the Dragon V2 aloft and serve to provide data as to what an actual astronaut would encounter.

A pit has been constructed at SLC-40 with SpaceX’s Transporter-Erector placed over the hole. Essentially, a steel frame has been placed over the pit with a simulated Falcon 9 v1.1 upper stage placed on top of the frame, with the Dragon V.2’s trunk on top of that, capped by the Dragon itself. This will allow SpaceX to somewhat replicate some of the conditions of an actual abort. Some sound suppression water will flow under Dragon to prevent damage to the craft.

The abort system that Dragon will use is different than traditional models (those used on Mercury and Apollo) as well we what is used on Roscosmos’ Soyuz spacecraft.

“There are different ways to do business… so, that SpaceX came up with this way, we think is fantastic. We see that, inherently, there is nothing wrong with putting the rockets on the side,” Cowart said. “As Hans has pointed out, you get some benefits from doing that. Eventually, someday, they hope to be able to do a propulsive landing. If they don’t have to do an abort, they can use those same rockets for a landing. Whereas if you had a conventional launch escape system on top, once you get up above a certain point, it’s jettisoned.”

If everything goes according to plan, this test will prepare the Dragon for other milestones which will culminate in crews riding the spacecraft to the International Space Station.

Both SpaceX’s Dragon and Boeing’s CST-100 capsules have been tapped to ferry astronauts to the ISS. These missions should launch from Cape Canaveral’s SLC-40 and 41 respectively. The last time a crew launched from Cape Canaveral was the flight of Apollo 7, which lifted off from Launch Complex-34 on Oct. 11, 1968.

When asked about why the next planned test for the Dragon V2, the launch abort test, is set to take place from Vandenberg Air Force Base in California in July of this year, Koenigsmann noted that it was due to the increased workload that SpaceX has encountered at the Cape.

“It’s because we are so busy launching here from the Cape… we have had, like what, five launches in four months?” Koenigsmann said with a tired smile.

No one asked if SpaceX will attempt to recover the booster in California when they do the in flight abort test?? Anyone here know???

No George, I don’t believe so. It’s a 3 engine vehicle and when the capsule separates from the booster, it’s at max aerodynamic pressure which isn’t far of max Q but is much lower in the atmosphere than would be under a normal flight. It’s likely therefore that the booster will disintegrate unless they put some sort of fairing cap on top. No one has discussed this so seems like it won’t happen and SpaceX will consider the booster expendable.
Cheers

The way I understand it, every first stage performs some sort of re-entry action, even if there is no plan for intact recovery. Each flight is another test for refinement. Maybe when the 2nd and 3rd ASDSs are completed landing attempts will be preformed in Ca.

Finally money being invested wisely in affordable reusable SAFE space vehicles. Jon Cowart talked like SpaceX won’t be doing propulsive landings for another billion years. Some how I feel that will happen sooner not later. I found it interesting that the same test vehicle will be used in launch abort test. If it survives I would think it would be sent to either Texas or New Mexico for a little landing practice. I seem to recall that SpaceX Project/program was call Dragon fly? Is Dragon fly a real Spacex project/program name or not??

I was referring to the fact that on each Gemmi flight technical progress was attempted or tested. I wasn’t comparing abort systems.

Since we learn here that this is the first time super Dracos have ever flown together, seems dragonfly program has been delayed some. Did the FAA clear them for testing?

I think it’s funny we think that Elon Musk is not receiving billions from tax payers to support Telsa motors and Space X. Blue Origin is going to be the game changer.Space X has no new ideas, they borrow tech from NASA.Every heard of the Yankee clipper in the 90s.Space X is guilty, just like Boeing for wasting money.They aren’t excepting this abort test to work.I hope for our tax dollars it works. Boeing and Space X will not meet 2017 deadline. I hope they meet this timeline,but expect NASA to come out in a year from now and say Boeing any Space X need more time and crying for more money.

Henry. Try to get the facts straight. Tesla repaid their loan yonks ago. SpaceX has been paid for services that they have delivered and at prices considerably below their competition. BO are showing promise however they’re not anywhere near the league that SpaceX is operating in. In fact no other commercial organisation is undertaking the wide range of both service delivery and R&D that SpaceX is in the spaceflight business. If they are, I’m happy to be corrected..
Cheers

Gentleman, I want the U.S. to succeed in space. We all have the passion about manned flight in the next couple of years. I’m biased toward ATK and the Ares and liberty rocket ideas. That’s another story. I’m a past aerospace worker,my father worked on the shuttle for Lockheed, and USA “an bad alliance,that got rid of a lot veterans workers at KSC with a safety first work force”. We have to remember the Great Wherner VonBraun of keeping the dream alive,which is space travel.I don’t trust the NASA mess, but I respect every worker that is involved from the past and present on unmanned and manned flight.

Henry
Public money turns good companies into workers.
Seems SpaceX was all ready to do the propulsive landing thing but…

“”NASAs Jon talks like it will be a billion years before Dragons does propulsive landings”
I think he was trying to be as non-committal as he could. When SpaceX was totally gung-ho on the the plan to do those type of landings from the get-go, it appeared to both freakout and annoy NASA. SpaceX back-peddled in there plans and every one is trying to not talk about it. I would guess after the first couple of Crew Dragon flights and parallel testing at SpaceX that we will see the plan roll back in”

I recall SpaceX’s Gwen Shotwell saying , “We want our capsule to land on a Helicopter pad in the back”, to the Johnson Space center crowd and the Boeing folks, to a cool reaction.

So NASA is intentionally holding back SpaceX,

the much less expensive winner of the manned program, to make it look like Boeing’s Deals are less of a rip off. How much more is Boeing getting for their simpler commercial capsule again?

Will 10 billion dollar and counting Orion capsule, ever do propulsive landings?

Put another way, SpaceX is being less aggressive for a little pork.

FWIW, the SpaceX CCtCap Contract mentions one propulsive landing test in Attachment J-03, Appendix A, targeted for September 2015 at the moment.

First I heard of this???