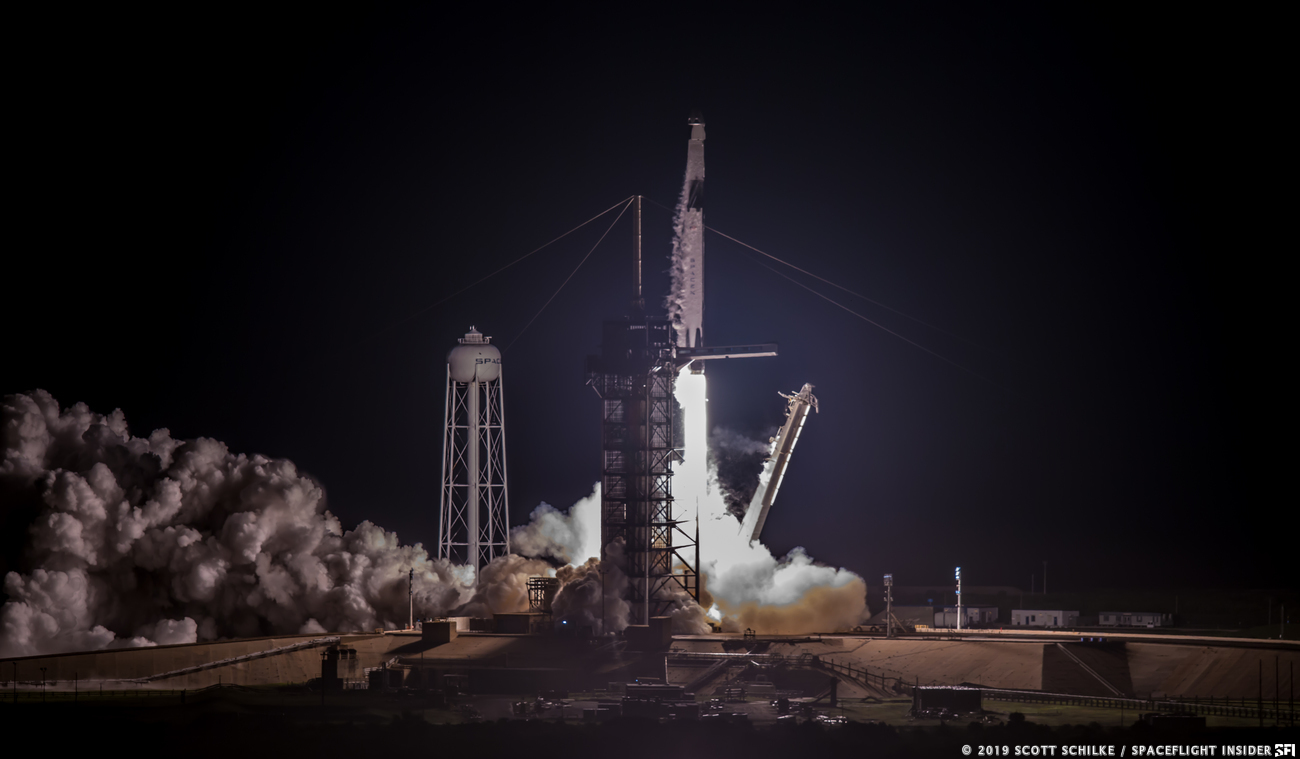 KENNEDY SPACE CENTER, Fla. — Clearing one of the final milestones before the return of human spaceflight to the United States, SpaceX successfully launched its Crew Dragon spacecraft on the Demo-1 mission.

Demo-1 is a six-day mission to the International Space Station (ISS). The unpiloted flight—part of NASA‘s Commercial Crew Program—lifted off at 2:49 a.m. EST (07:49 GMT) March 2, 2019, from Launch Complex 39A at Kennedy Space Center in Florida.

“I’d like to express a very strong note of appreciation for the SpaceX team,” said SpaceX CEO Elon Musk during a post-launch press conference, which took place at 4 a.m. EST (09:00 GMT). “It’s been 17 years to get to this point, from 2002 to now, and an incredible amount of hard work and sacrifice from a lot of people.” 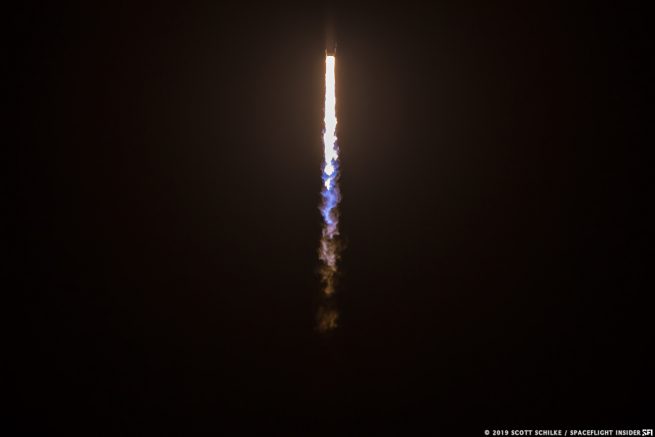 Musk said he was emotionally exhausted because the launch was stressful.

“But it worked, so far,” Musk said. “We have to dock with station. We have to come back. But so far, it’s worked and we’ve passed some of the riskiest items.”

Making history from a place steeped in it

No stranger to history, Pad 39A was awash in the illumination of bright floodlights as it played host to yet another important mission in the annals of U.S. spaceflight.

Shortly before the opening of the instantaneous launch window, the Falcon 9‘s nine Merlin 1D engines roared to life with the telltale green flash from the boron in the self-igniting mixture of triethylaluminum and triethylborane (TEA-TEB). Following a quick health check of the vehicle and its propulsion system, the rocket and its uncrewed spacecraft lifted from the pad—climbing on 1.71 million pounds (7,065 kilonewtons) of sea-level thrust—marking the start to this historic first flight of SpaceX’s Crew Dragon.

Building speed as it continued to climb, the vehicle began its gravity turn as it assumed a northeasterly heading over the Atlantic Ocean on its way to catch the ISS.

Nearly one minute after leaving the ground, the Falcon 9 and its payload passed the point of peak stress on the rocket and spacecraft. This part of the flight profile is called “Max Q” and is the aggregate of structural and atmospheric loads experienced by the vehicle on its ascent. 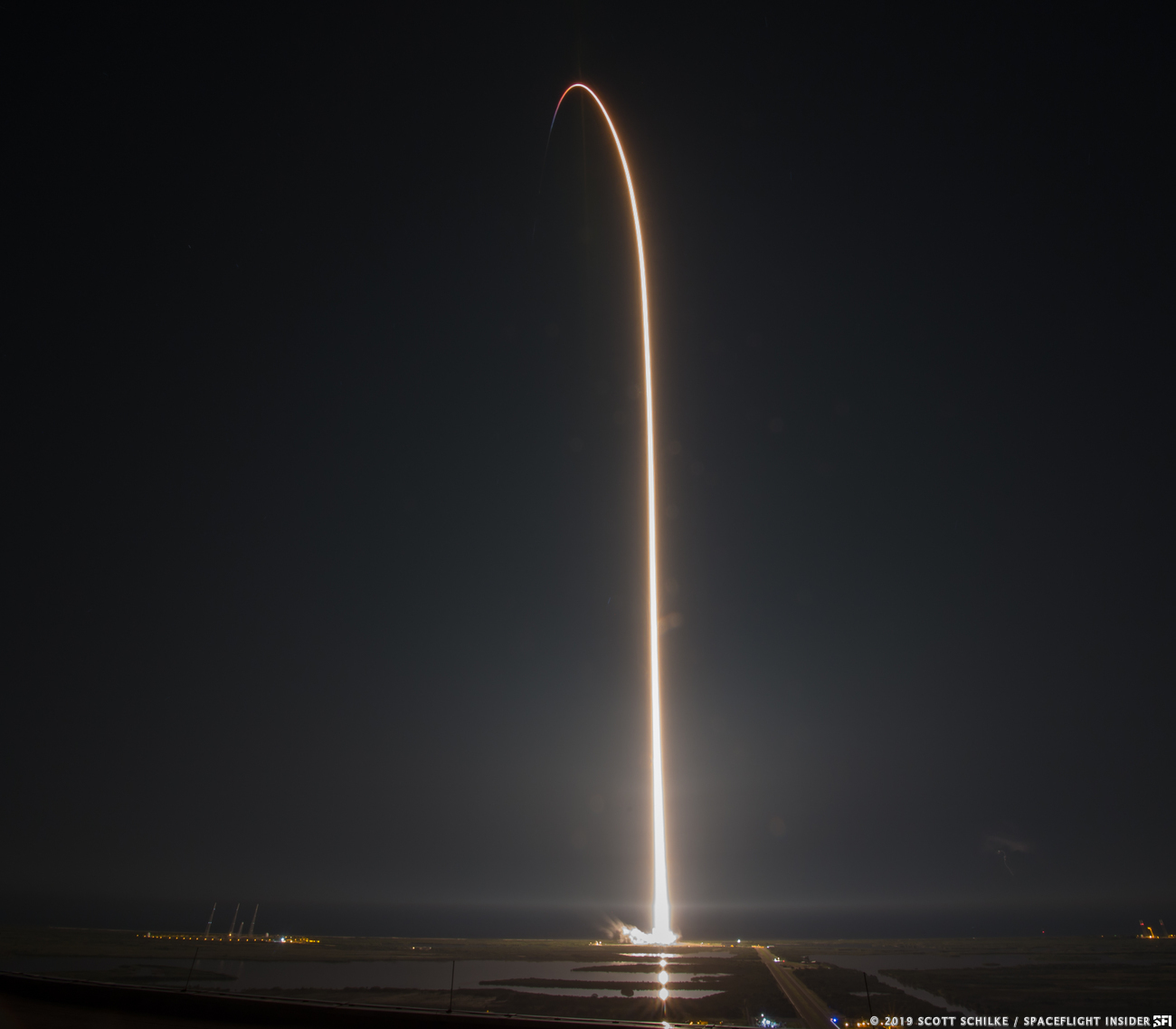 After passing Max Q, the first stage’s Merlin engines powered the rocket for another 97 seconds before completing their task for the boost phase of the flight. Shutdown of the booster’s nine engines occurred just after two and a half minutes of flight, followed by stage separation three seconds later.

The first stage, with its portion of the primary mission now complete, began a turn to reorient itself in preparation for a landing on the autonomous spaceport drone ship “Of Course I Still Love You” positioned about 306 miles (492 kilometers) downrange from Kennedy Space Center.

Nearly simultaneously, the lone Merlin 1D Vacuum (MVAC) engine on the second stage ignited for the orbital phase of the flight. Capable of producing up to 205,000 pounds (914 kilonewtons) of thrust in its vacuum configuration, the Merlin was set to burn for more than seven minutes in order to deliver the Crew Dragon spacecraft to orbit. 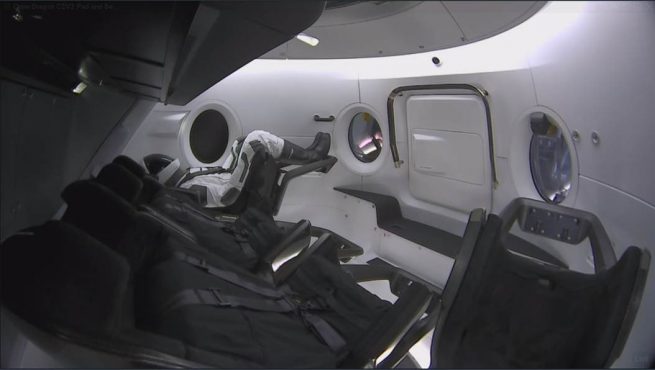 SpaceX’s ATD named Ripley sits in the far left seat in this image. It will stay there for the whole mission to collect various data points regarding cabin conditions during ascent, flight and landing. Photo Credit: Elon Musk / SpaceX

Meanwhile, the first stage began its entry burn nearly eight minutes after having lifted off. Meant to shed speed, and relieve the booster of the accompanying stresses it would encounter as it dove through the ever-thickening atmosphere, the 30-second engine firing slowed the booster on its descent to the waiting drone ship in the Atlantic below.

A landing stuck and history struck

Approximately nine minutes after leaving the ground, the second stage’s MVAC was shut down as it and its Crew Dragon spacecraft achieved a nominal parking orbit.

As the spacecraft and its second stage took a brief pause, the first stage made a beeline for the drone ship. Almost 30 seconds before landing, the booster reignited a subset of its nine engines to slow itself for a landing on the floating pad.

Though recovering boosters has become commonplace for the company, cheers nonetheless erupted from SpaceX’s headquarters in Hawthorne, California, as confirmation came that the stage had landed successfully, with video footage showing the rocket near the center of the concentric landing rings.

Normally, SpaceX missions generate more spectator interest for their secondary mission—recovering the booster—but the loudest applause came a minute after booster landing when the spacecraft separated from the second stage. Now clear of the rocket that delivered it to orbit, Crew Dragon made its mark on history as it became the first commercial, crew-capable spacecraft to orbit freely on its own. 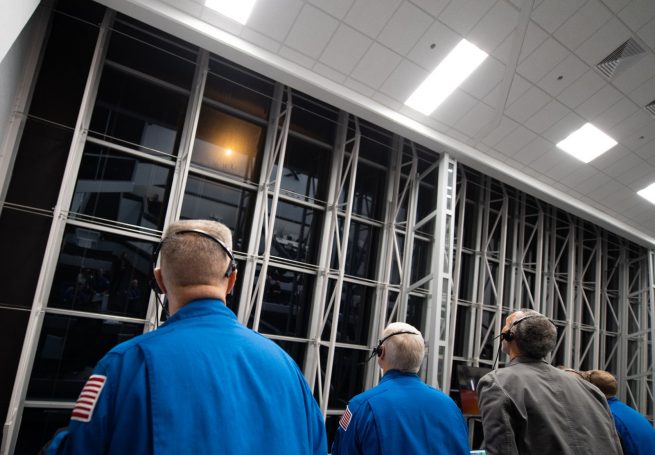 NASA astronaut Doug Hurley, left, watches Crew Dragon launch. To his right is chief of the astronaut office Pat Forrester. Hurley is slated to be on the Demo-2 flight later in 2019. Photo Credit: NASA / Joel Kowsky

“Today’s successful launch marks a new chapter in American excellence, getting us closer to once again flying American astronauts on American rockets from American soil,” said NASA Administrator Jim Bridenstine in a statement. “I proudly congratulate the SpaceX and NASA teams for this major milestone in our nation’s space history. This first launch of a space system designed for humans built and operated by a commercial company through a public-private partnership is a revolutionary step on our path to get humans to the Moon, Mars and beyond.”

Crew Dragon will spend the next 27 hours gradually approaching the ISS, where it is scheduled to dock at approximately 6:00 a.m. EST (11:00 GMT) March 3. Though this is largely a shakedown flight of the Crew Dragon and its systems, the spacecraft will deliver nearly 400 pounds (181 kilograms) of cargo to the ISS.

Unlike pure cargo deliveries by SpaceX’s first-generation Dragon spacecraft, which are actually berthed to the orbiting outpost with the help of an astronaut using the station’s 57.7-foot (17.6 meter) robotic arm, Crew Dragon will autonomously dock with a docking adapter at the forward end of the space station.

Following the conclusion of Demo-1, SpaceX plans to conduct an in-flight abort test to validate the vehicle’s capability to escape a launch mishap.

Tentatively scheduled for June 2019—though SpaceX CEO Elon Musk tweeted that it could take place as early as April—that test is expected to see the Crew Dragon from Demo-1 launched atop the Falcon 9 first stage used for the recent Nusantara Satu mission with an abort sequence triggered during the most stressful portion of a flight profile.

Should no significant issues arise from either test, SpaceX plans to launch the first crewed mission—Demo-2—no earlier than July 2019.

Video courtesy of SpaceX and NASA