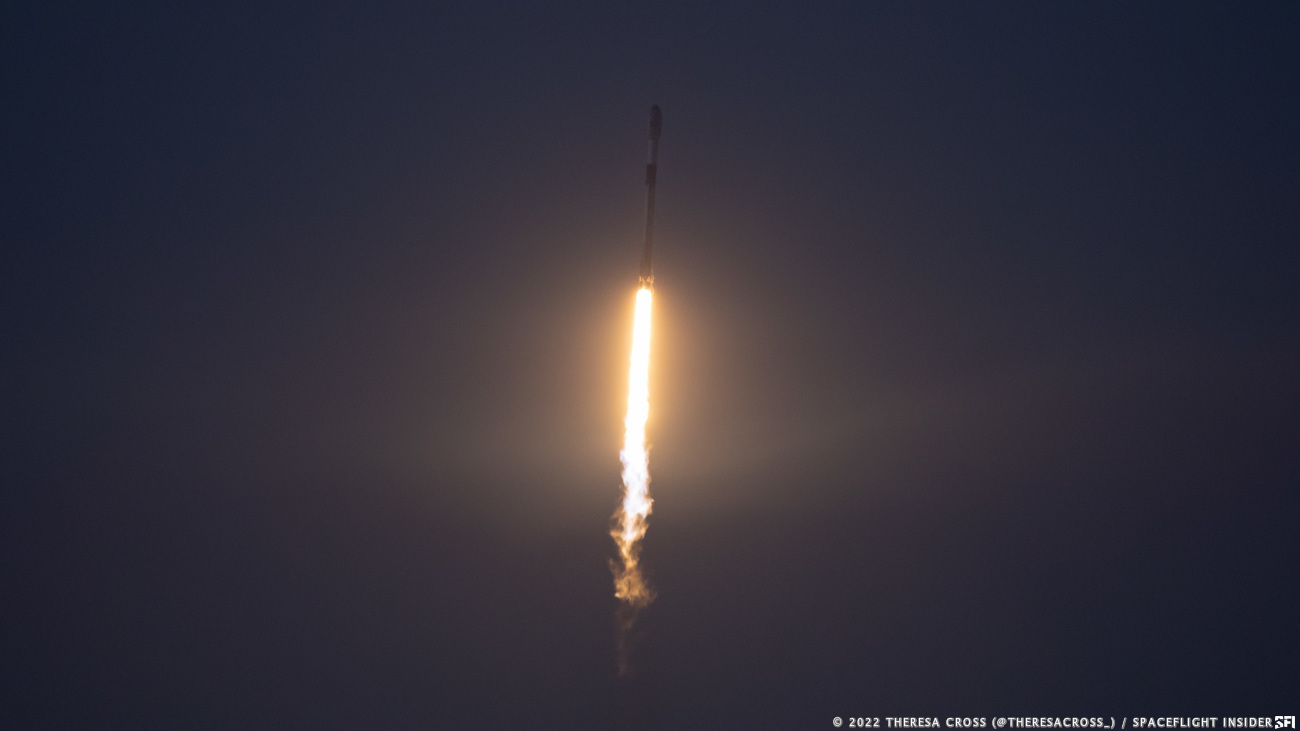 After four days of delays, SpaceX was finally able to get its Falcon 9 rocket off the ground to send an Italian satellite into space. 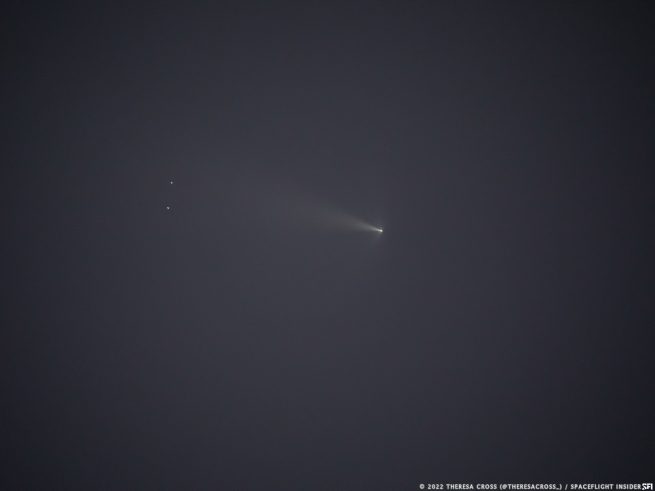 The second stage of the Falcon 9 rocket soars toward orbit, dropping off its payload fairing along the way to expose the Italian satellite CSG-2. Credit: Theresa Cross / Spaceflight Insider

The payload for the launch was the second Italian COSMO-SkyMed second generation, CSG-2, spacecraft. It was sent on a southerly trajectory into a polar Sun-synchronous orbit and deployed about an hour after liftoff.

SpaceX initially tried to launch Jan. 27 at the same time, however, weather was so poor that the company didn’t even begin filling the rocket’s propellent tanks. On Jan. 28, the countdown was able to get to within a couple minutes of launch, but thick clouds kept the vehicle and payload on the ground.

On Jan. 29, the winds were too high and not expected to subside before liftoff. So the attempt was called off hours in advance.

Then, on Jan. 30, the weather was finally nearly perfect. However, a range violation, likely because of an outbound cruise ship from Port Canaveral wandering into the hazard zone, prompted a hold and then a scrub.

At 4,900 pounds (2,200 kilograms) CSG-2 is an Italian Earth observation satellite with upgraded instruments, one being the largest the Synthetic Aperture Radar for higher resolution imagery including single or dual polarized modes. 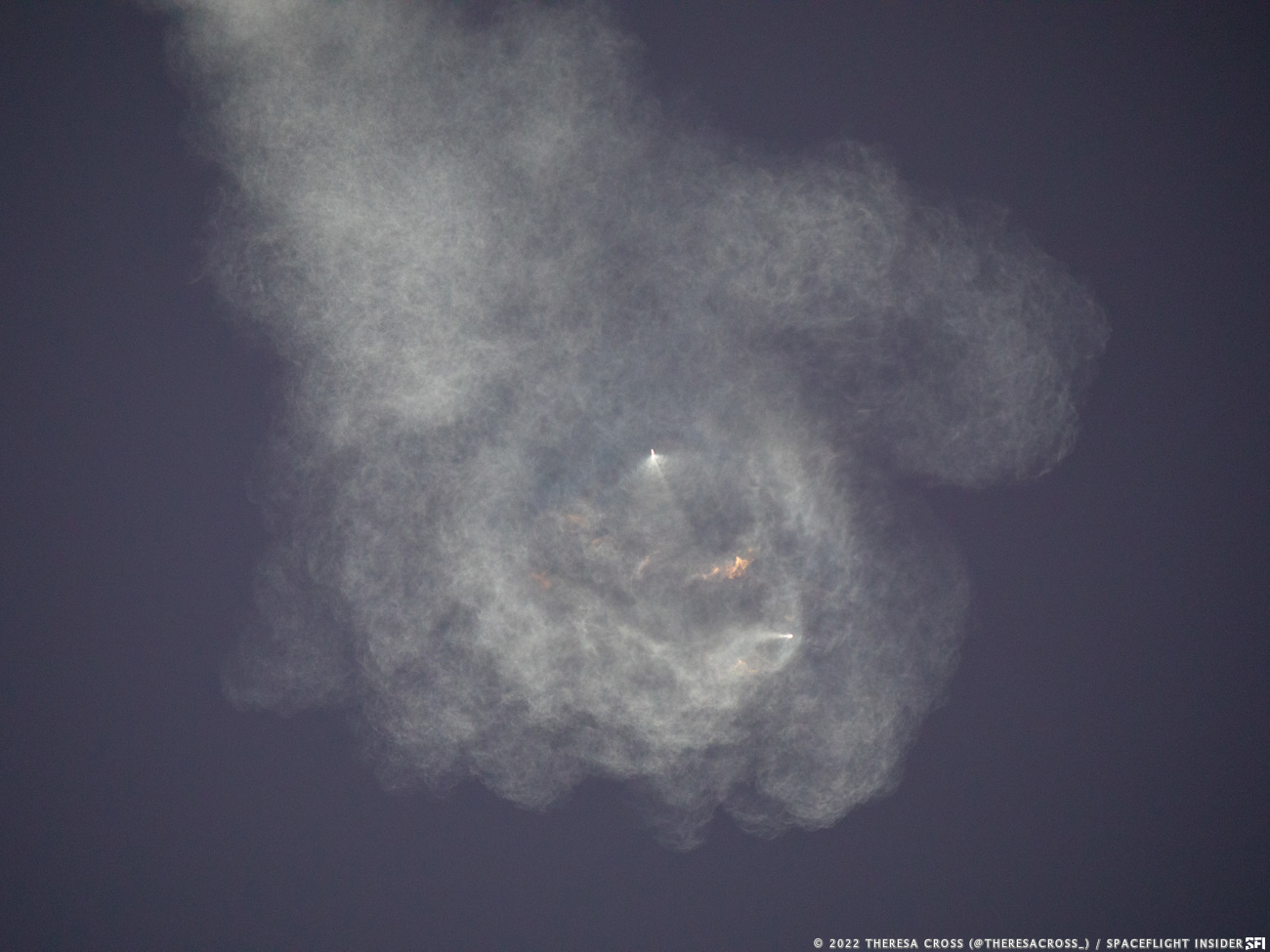 The plumes of both the first and second stages of the Falcon 9. The first stage was beginning its return to Cape Canaveral while the second stage was continuing on toward orbit. Credit: Theresa Cross / Spaceflight Insider

These significant scientific equipment updates are expected to allow for radar images in most any weather condition on Earth.

Changes to onboard hardware equipment will also pave the way for more streamlined data to customers by way of the Payload Data Handling and Transmission, PDHT, mechanism by enabling double the rate of transmission and storage capacity for users. 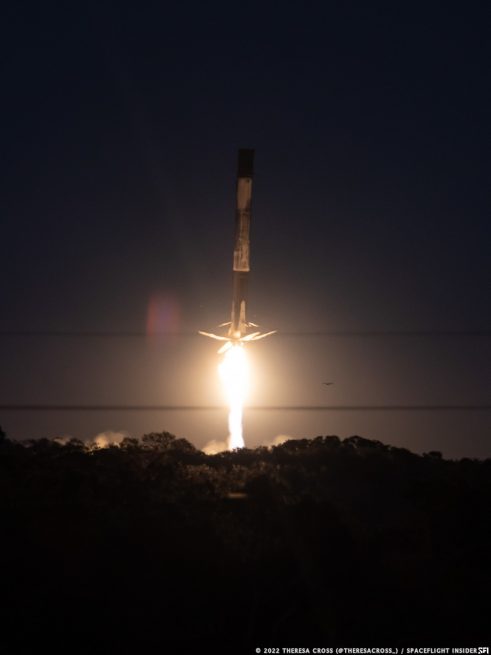 The ground equipment in receipt of the newly designed PDHT will also be upgraded to operate in concert with other CSG satellites.

For the launch, the first stage used for this flight was core B1052. It was on its third mission after having first flown as a side booster for two Falcon Heavy launches in 2019.

This was the first time that a Falcon Heavy side core has been repurposed as a Falcon 9 first stage. As such, there was no U.S. flag or “F9” logo on its side.

Additionally, there was no payload insignia on the previously flown fairing halves.

After the first stage finished its part in the ascent and separated from the second stage, some 2.5 minutes into the launch, it performed a boost back burn to return to Cape Canaveral to touch down at Landing Zone 1.

This was the second ground-based landing for SpaceX this year and the fourth overall Falcon 9 launch in 2022.

A third Falcon 9 in as many days is expected from SpaceX’s West Coast launch pad at Vandenberg Space Force Base in California on Wednesday to send a classified payload into orbit for the National Reconnaissance Office. Liftoff is targeting 3:18 p.m. EST (20:18 UTC) Feb. 2.