SpaceX Dragon leaves ISS, splashes down in the Pacific Ocean 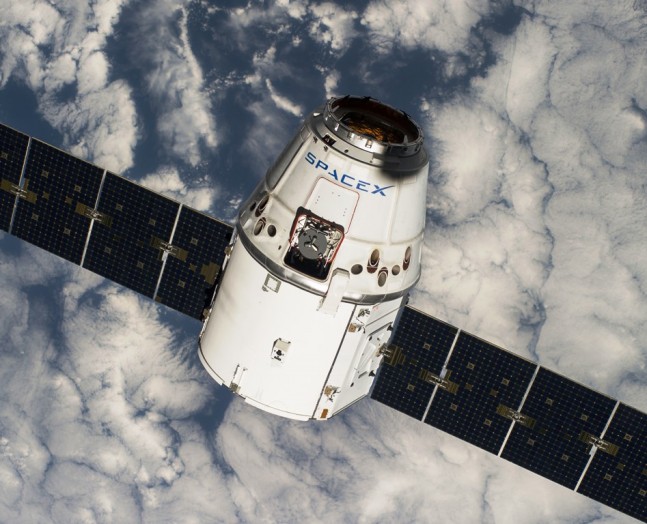 SpaceX's Dragon spacecraft that delivered cargo to the station as part of the CRS-6 mission has left the station. Photo Credit: NASA / SpaceX

SpaceX’s Dragon cargo spacecraft departed the International Space Station (ISS) at 7:04 a.m. EDT Thursday and successfully splashed down in the Pacific Ocean at 12:42 p.m. The Dragon Spacecraft returned to Earth with nearly 3,100 pounds (≈1,400 kg) of NASA cargo, including specimens from research on how spaceflight and microgravity affect bone health and the aging process.

The splashdown marked the end of SpaceX’s  sixth NASA contracted cargo resupply mission (CRS-6), which began on April 14, 2015, with the launch of a Dragon spacecraft carrying over two tons of supplies and scientific cargo atop a Falcon 9 V1.1 rocket from  Cape Canaveral Air Force Station in Florida. Dragon is the only cargo spacecraft capable of returning cargo to Earth. This capability is vital to scientists conducting research aboard the ISS. Looking a little worse for wear, SpaceX’s Dragon is seen in this image after being collected from the Pacific after splashdown. Photo Credit: SpaceX

One of experiments returned aboard the Dragon Spacecraft was the Space Aging study which examines the effects of spaceflight on C. elegans, a species of nematode or roundworm. By growing the millimeter-long organisms on the space station, scientists can study physiological changes that may affect the rate at which roundworms age. Because C. Elegans has been widely studied as a model for higher organisms, the finding can be applied to changes that have been observed in astronauts and aid in the development of countermeasures for long duration missions.

“Spaceflight-induced health changes, such as decreases in muscle and bone mass, are a major challenge facing our astronauts,” said Julie Robinson, NASA’s chief scientist for the International Space Station Program Office at NASA’s Johnson Space Center in Houston. “We investigate solutions on the station not only to keep astronauts healthy as the agency considers longer space exploration missions but also to help those on Earth who have limited activity as a result of aging or illness.”

Samples were also returned from Osteocytes and mechano-transduction study (Osteo-4 ) which observed the effects of microgravity on the most common type of cells in bone. Understanding the effects of microgravity on osteocytes will be critical as astronauts plan for future missions that require longer exposure to microgravity, such as to deep space or Mars. The results of this study could also have implications for patients on Earth who suffer from bone loss due to conditions like osteoporosis. The next Commercial Resupply Services mission for SpaceX is slated to occur on June 26, 2015. Photo Credit: Michael Howard / SpaceFlight Insider

“If we can figure out bone loss in the extreme conditions of space, we could figure out how to make more bone or counteract bone loss in astronauts,” said National Institutes of Health grantee Paola Divieti Pajevic, M.D., Ph.D., principal investigator of the Osteo-4 study and associate professor at the Goldman School of Dental Medicine at Boston University. “This has applications to millions of people on Earth who are affected by osteoporosis and related fractures.”

After a return voyage that took less than six hours, the Dragon spacecraft splashed down on target in the Pacific Ocean approximately 155 miles from Long Beach California. The spacecraft was winched aboard a recovery ship and transported to the Port of Los Angeles.

The CRS-6 mission lasted 37 days, the long stay at the space station so far for a Dragon spacecraft. The next Dragon trip to the ISS is CRS-7, which is currently scheduled to launch from Cape Canaveral on June 26. The Dragon Spacecraft splashed down in the Pacific Ocean on May 21, 2015. Photo Credit: SpaceX

Thanks for the splashdown coverage.

Complacency about doing things incorrectly, there is a correct way to present the date. Everybody implicitly knows the date should always be presented Y/M/D and it is absurd to suggest there are 24 hours in a year. 2015-05-22 15;15 EDT Friday
http://cowaro.com . Read and heed.

That’s too cool for school!