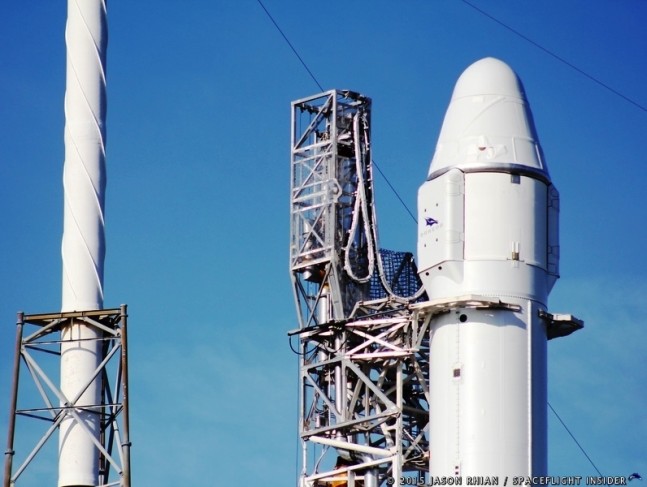 CAPE CANAVERAL, Fla — Until recently, Florida residents Sally and Don (their last names have been withheld to protect their identity) have been quite ambivalent about space exploration. The launches at NASA’s Kennedy Space Center take place a mere 70 miles away from their home, but did not pay them much mind. That changed on April 14, however. On that day, NASA and SpaceX successfully began the Commercial Resupply Services (CRS-6 or SpX-6) mission. The Falcon 9 v1.1 booster and Dragon spacecraft roared into the afternoon sky on a trip to the International Space Station (ISS) orbiting some 220 miles above Earth. What captured their interest was one of the experiments included in the mission’s 4,900 lbs (2,223 kg) worth of payload, one aimed at discovering new treatments for osteoporosis. Normal bone density (left) can be viewed alongside a bone suffering from osteoporosis (right) in this WebMD image. Image Credit: WebMD

“After the Shuttle Program concluded in 2011, we just lost interest in anything related to space,” Sally said.  “We’ve already been to the Moon, and we just don’t see the value of the government spending more billions of dollars on going to an asteroid or Mars. But that was before we read about the experiment seeking new discoveries to treat bone density loss.”

Sally is among the estimated 10 million Americans who have osteoporosis, a condition marked by low bone mass (a thinning of the bone), which can lead to a weakening of the bone architecture and increased susceptibility to fracture (usually of the hip, wrist and /or spine). Another 34 million Americans are afflicted with the less severe “low bone mass”. In total, that represents about 55 percent of people aged 50 and older in the United States, according to a 2014 report of the National Osteoporosis Foundation. Spinal fractures from osteoporosis are common, with an estimated 700,000 compression fractures occurring each year. SpaceX’s Dragon should remain on station until around May 20. Photo Credit: Expedition 43 / NASA

The microgravity environment of the ISS provides medical researchers with a remarkable environment location to study bone mass loss. It has been shown that astronauts on long-duration missions experience a significant decline in bone strength. While some of the contributing factors may be related to nutrition and disuse, other contributors such as skeletal changes and differences in body fluid flow seem to duplicate what happens to older individuals on Earth.

Scientists believe that bone cells contain a material called osteocytes, which sense inactivity and stimulate bone loss, according to Paola Pajevic Divieti (MD, PhD, of Boston University), the Principal Investigator for the experiment called Osteo-4 which was launched to the orbiting laboratory on Dragon. The experiment involves live bone cells from mice, contained in 9 glass cylinders each about six inches long and two inches in diameter. After about an hour at the Space Station and once again after about 3 days, astronauts will remove some of these cells from their bioreactor cylinders and put them into cold storage.

All of the cells and bioreactors will return aboard the Dragon capsule on its return trip to Earth after approximately five weeks at the ISS. Dragon will splash down and the Osteo-4 experiment materials will be shipped first to the Kennedy Space Center and then to Dr. Pajevic’s lab at Boston University for analysis. The results will be applied to other studies with the goal of developing treatments that may not only block bone loss but also discover new means to stimulate bone cell growth.

The Osteo-4 experiment is one of about 40 research investigations being supported by the CRS-6 mission, many of which are directed to benefiting people on Earth.

My wife was diagnosed with osteoporosis and given a sample of Boniva to be taken orally once a month.she took the first pill as prescribed 5/21/2017. few months later she experience pain under her right breast to the right of my sternum. It increase in intensity for the next 10 to 12 hours at which time the pain spread to the left side,i was very worried which i had nothing to do,but she was able to get rid of this disease totally with the help of Totalcureherbalfoundation gmailcom
her condition improved immedately after the herbal formula were suggested.