May the 4th be with you: SpaceX CRS-17 Dragon launches to ISS 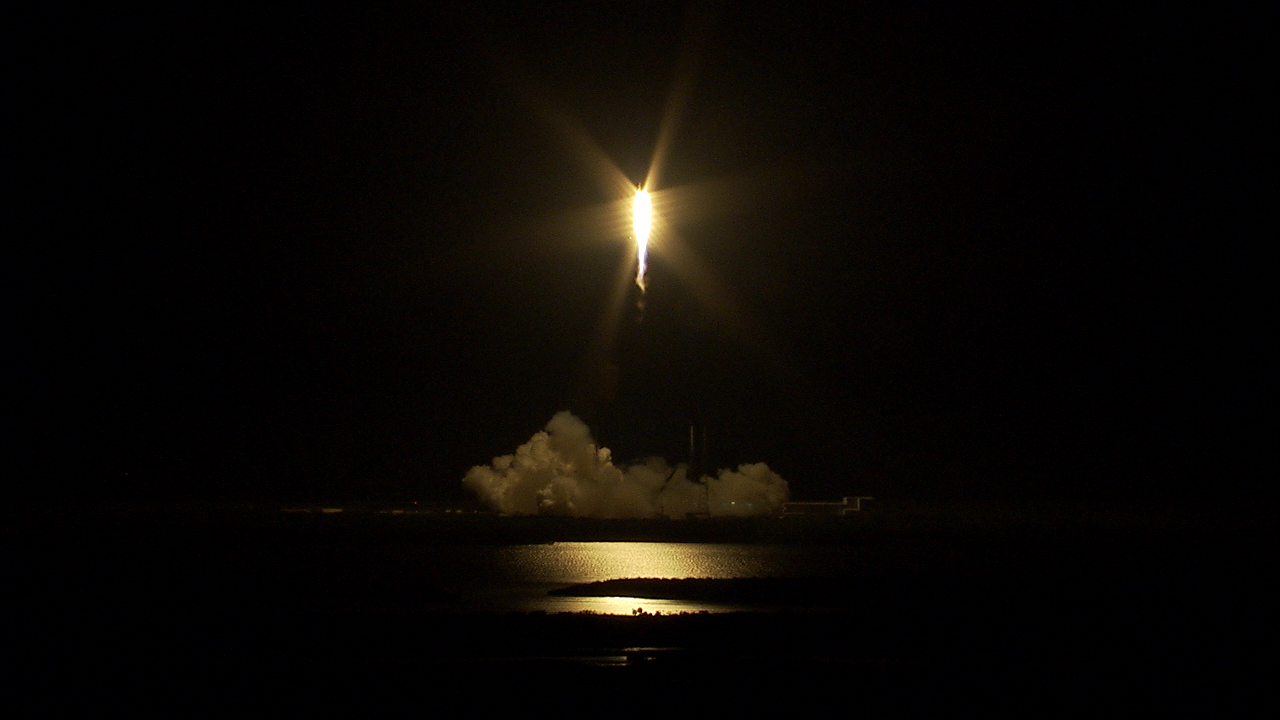 SpaceX’s Falcon 9 with the CRS-17 Dragon capsule races toward space during the early-morning hours of May 4, 2019. Photo Credit: NASA

CAPE CANAVERAL, Fla. — Supplies for Expeditions 59 and 60 are on their way to the International Space Station after SpaceX successfully launched its 17th Dragon cargo resupply mission to the outpost.

The Dragon capsule was lofted to space atop the Block 5 version of the Falcon 9 rocket, which took off at 2:48 a.m. EDT (06:48 GMT) May 4, 2019, from Space Launch Complex 40 at Cape Canaveral Air Force Station. It is the second of five missions under an extended cargo resupply contract awarded to SpaceX in 2016. 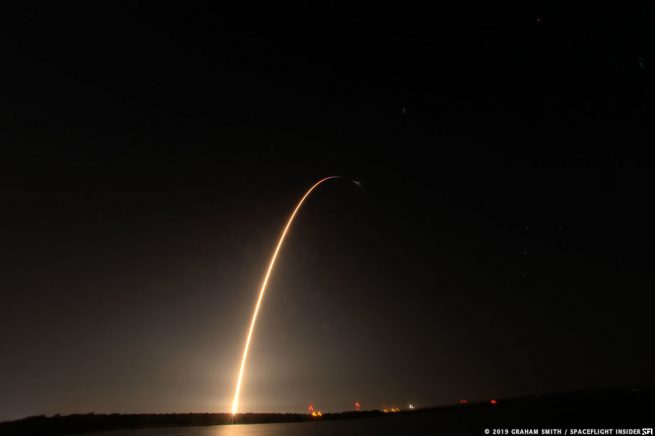 Perhaps it’s fitting the launch occurred on Star Wars Day—May 4—a day that sounds like the first part of the phrase “May the force be with you.” SpaceX’s Falcon 9 rocket is named after the Millennium Falcon, the fastest hunk of junk in the Star Wars galaxy.

In the lead up to the CRS-17 flight, the mission suffered from some unusual delays. Initially the flight was postponed to allow for better synchronization with the ISS.

Later, a power issue aboard the space station added an additional a two day hold to May 3. The CRS-17 mission was initially targeted to fly on April 26.

Moreover, inclement weather around the Space Coast on the morning of May 3 threatened to postpone the flight. Forecasters at the 45 Weather Squadron were predicting a 60% chance of a weather-related rule violation, in particular the thick and cumulus cloud, and flight through precipitation rules.

While the bad weather ultimately stayed away from the launch area on May 3, the countdown was halted about 11 minutes before the planned 3:11 a.m. (07:11 GMT) liftoff time because of a power failure aboard the recovery drone ship, positioned about 17 miles (28 kilometers) offshore.

Named “Of Course I Still Love You,” the drone ship was towed back to Port Canaveral for repairs before being returned to its position in the Atlantic Ocean just east of Cape Canaveral. 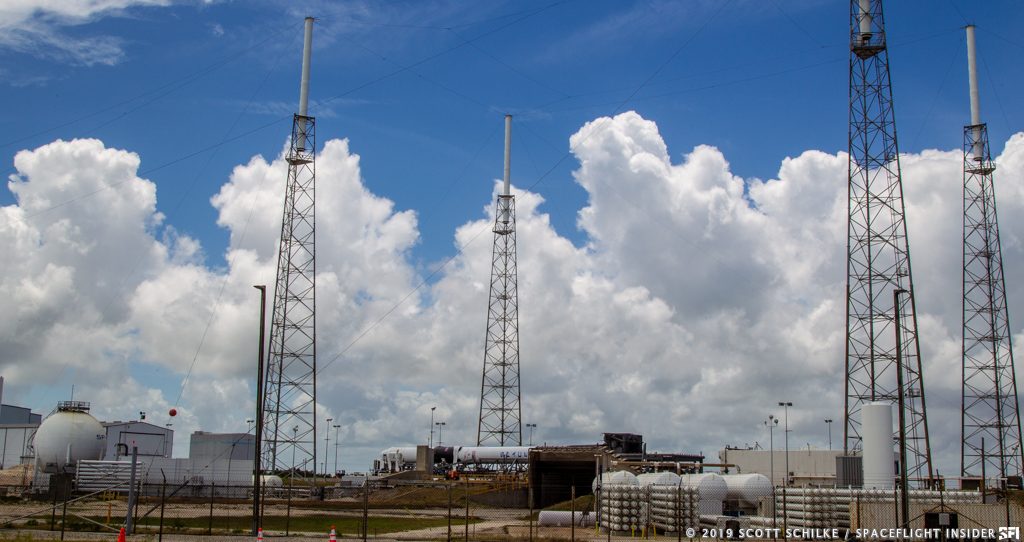 The Falcon 9 with CRS-17 before being raised to the vertical position for its May 3 launch attempt. Photo Credit: Scott Schilke / SpaceFlight Insider

When the SpaceX launch team came back for the second and ultimately successful attempt on May 4, the countdown proceeded smoothly all the way to liftoff with no weather or technical issues.

Just a few seconds before liftoff, the nine Merlin 1D engines at the base of the 213-foot (65-meter) tall Falcon 9 ignited and spooled up to full power. Once the rocket lifted off the ground, it took just over a minute for it to reach the area of maximum pressure on the stack, Max Q.

From there the rocket only accelerated faster until about 2 minutes, 20 seconds into flight when the first stage engines cut off as planned. Several seconds later, the first and second stages separated. 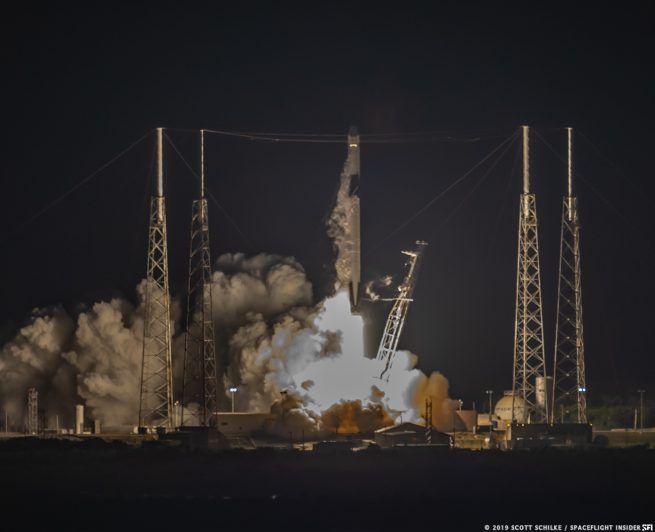 This was followed by the ignition of the second stages lone Merlin Vacuum engine several seconds after that.

At the same time, the first stage began pitching around some 180 degrees to begin firing back toward Florida using three of its nine Merlin 1D engines.

As the second stage continued powering toward orbit with the CRS-17 Dragon on top, the first stage coasted toward its next milestone—the entry burn. This occurred at a mission-elapsed-time of 6 minutes 40 seconds and lasted for about a minute.

Then less than a minute later, the stage fired its center engine to perform a landing burn to touch down on SpaceX’s drone ship “Of Course I Still Love You,” situated about 17 miles (28 kilometers) off shore.

Landing Zone 1, where the stage was initially supposed to land, was unavailable due to the ongoing investigation into the April 20 Crew Dragon anomaly.

Touchdown on the drone ship took place about 8.5 minutes after leaving its launch pad at SLC-40. At the same time, the second stage reached its intended orbit, ending its Merlin Vacuum engine burn.

The CRS-17 Dragon spacecraft separated from the second stage about a minute later before deploying its solar panels several minutes after that. 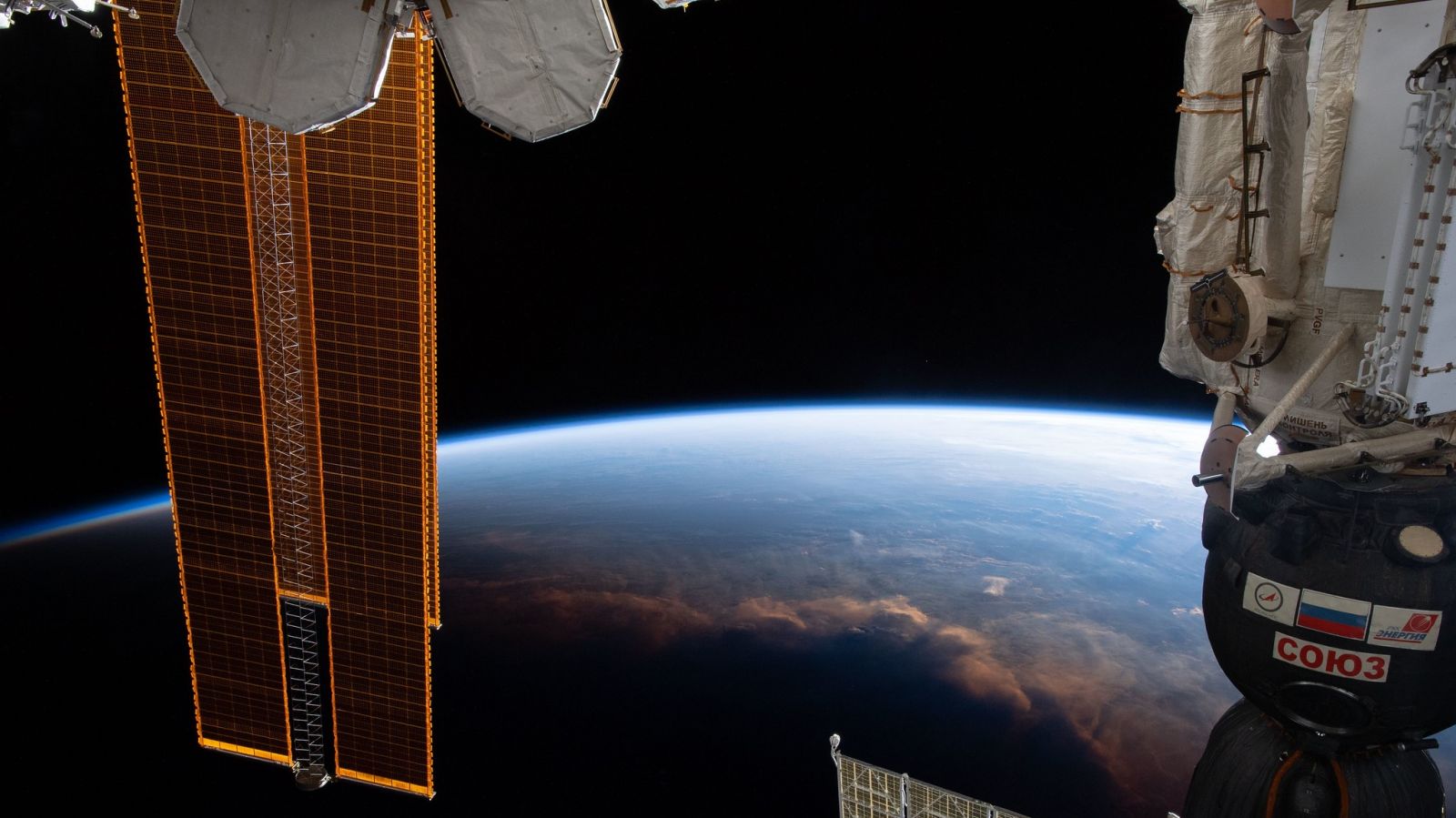 The CRS-17 Dragon spacecraft is set to rendezvous with the ISS on May 6, 2019. Photo Credit: NASA

SpaceX’s CRS-17 Dragon spacecraft is expected to take two days to catch up to a rendezvous with the ISS. Once the capsule is within 33 feet (10 meters) of the station, Expedition 59 Flight Engineer and Canadian Space Agency astronaut David Sating-Jacques is expected to use the robotic Canadarm2 to “grab” the spacecraft and latch it into place on the Earth-facing port of the Harmony module. This is currently planned for about 7:30 a.m. (11:30 GMT) May 6.

CRS-17 is sending some 5,500 pounds (2,500 kilograms) of food, supplies, experiments, and replacement hardware to the ISS. This includes two instruments in the spacecraft’s unpressurized external storage area, or trunk: the Orbiting Carbon Observatory 3 (OCO-3) and Space Test Program-Houston 6 (STP-H6). 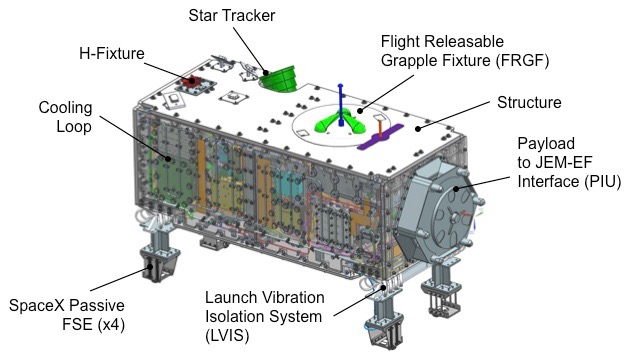 A diagram of the OCO-3 payload. Image Credit: NASA

OCO-3 was manufactured from spare parts from the OCO-2, a close copy of the soon to be delivered experiment. OCO-3 is designed to look for carbon dioxide gas in Earth’s atmosphere specifically looking for carbon sources such a large cities and carbon sinks—places where CO2 is sequestered, notably in forest or dense vegetation areas.

According to NASA, “OCO-3 measurements can be combined with evapotranspiration and biomass measurements, such as those from other ISS instruments ECOSTRESS and GEDI, to study process details of the terrestrial ecosystem.”

Designed to use a “novel technique for generating X-rays that can be switched on and off at rates much faster than traditional X-ray sources, STP-H6 is an X-ray communication demonstration,” according to NASA.

STP-H6 is expected to use the Neutron Star Interior Composition Explorer (NICER) as a receiver. That instrument is attached to External Logistics Carrier-2 on the S3 truss. It was brought to the station by SpaceX’s CRS-11 mission in June 2017.